Game ReviewsMediaNights of Azure 2: Bride of the New Moon
No Comments

[PS4] Nights of Azure 2: Bride of the New Moon Review 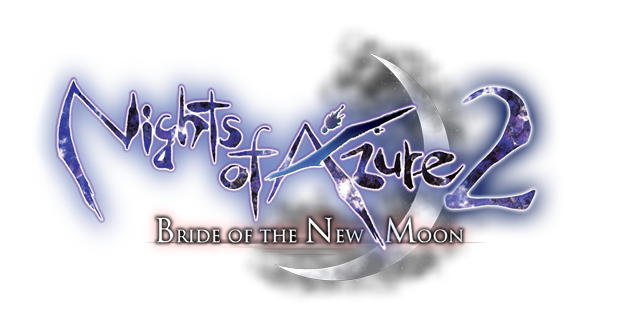 The world is still enveloped in darkness and demons are slowly taking over. Another pilgrimage with a sacrifice is needed to prolong the worlds daylight! Can you aid your friend in her sacrifice to keep the world safe? Learn more in our Nights of Azure 2: Bride of the New Moon review!

A Tale of Three Beautiful Maidens Drawn to Each Other.
Beautiful women, Servans, battles, and growth system – all these elements return in an evolved form in the second installment of the gothic fairytale action RPG series ‘Nights of Azure’.

Nights of Azure 2: Bride of the New Moon – Announcement Trailer

I had a chance to review Nights of Azure last year. I’m pretty sure when reviewing the last game that I knew a sequel was coming to our shores at some point this year and I was looking forward to giving it a crack and see how it turned out. Guess what that time has arrived!!

Nights of Azure 2: Bride of the New Moon actually feels a lot like the original for better and worse. The story initially starts very similarly to the originals. You are Aluche the protector of your friend Liliana. She is a young priestess who will be sacrificing herself to keep the world’s light a little longer. If this sounds familiar, it’s because it’s very much the story from the first title. Also as well as in the first title there are feelings between these two ladies as well. The game does deviate from the originals with a few good twists though. There is a third protagonist Ruenheid… she is also a friend with both of your characters, however, she works for an opposing organization that doesn’t believe in your same mission. Also not a big thing, but Aluche is killed very early in the game, and is resurrected by a demon, now being part demon and your friend Ruenheid doesn’t like demons at all. So yeah, that definitely sets it apart a bit. 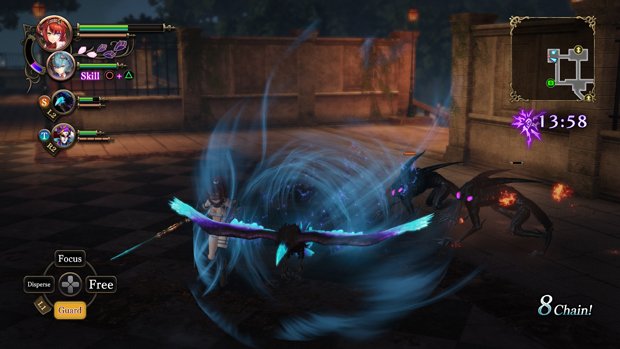 Some of the big changes in this title though come in a revamped combat and with this game being an RPG that is a big change. The game still has a hack and slash action RPG feel to it, however, now you can set up more of a party in the game that really changes up the flow of combat. You can have a second woman join you on the battlefield and your fighting style will chance based on who your second character is. It could be Ruenheid or any some of the other characters you meet along your journey. Not just your fighting style changes but you get some really cool team up moves as well that do massive damage. You can build your relationships with the characters that will unlock special quest, that unlock cooler abilities. It takes some time but it’s worth putting in.

You can also have some cool minion characters that are almost like Pokemon out. They follow you around and help you in battle, even if their help doesn’t seem to sway the overall battle. Their main purpose seems more for exploration helping you reach other areas on the map you couldn’t get to before. It’s almost like a bit of Metroidvania take on the game. Overall I liked the changes to the combat quite a bit. It made the combat more active, which to me made the game more enjoyable. Hopefully, the series can continue to see this direction going forward. 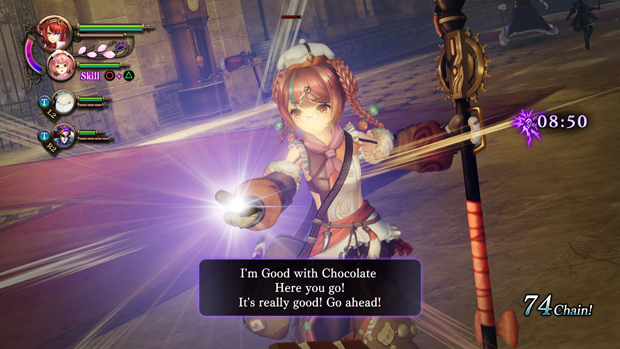 One thing that hasn’t really changed is the graphical look and feel of the title. The game doesn’t seem to have many upgrades from it’s original and that’s probably to be expected as they are running on the same engine. It’s not bad in fact the game looks just as good, it just doesn’t do anything to set it apart from it’s older title. The game has been developed for four platforms, including the PS4’s little bro the Vita, so sometimes sacrifices must be made for games to run on older hardware. The music however in the game was excellent. It has a great score, that really makes you feel the sadness of the world. It’s almost haunting in a way, and when you think about it as a world with demons and light getting shorter and shorter, as well as marching your friend/lover to her death as a sacrifice to the world, there isn’t much to be happy about and the game does a great job with that.

The title has 52 trophies including a platinum!! However, getting this platinum is going to be a real grind. A lot of trophies are based on story completion, but a ton or for maxing out characters and armor, finding all the servans, and completing different quests. It will take quite a bit to get them all unlocked, but it’s definitely doable. 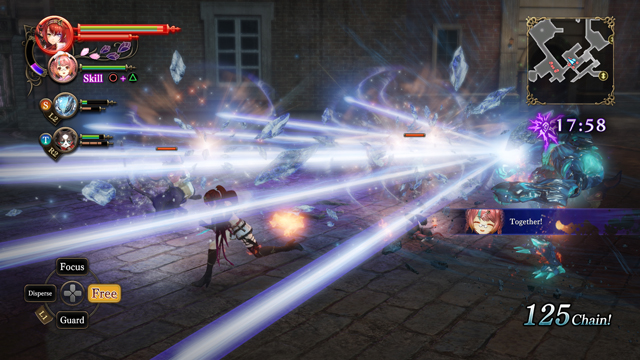 I really like Nights of Azure 2: Bride of the New Moon. It made some refreshing changes to the combat, which I actually think helped the story quite abit. That being said at the same time the game feels very similar to the otherone due to very similar graphics, and a story that for the most part seems very reminisanct of the original. The game is still very compelling and does a great job of creating an overall package. Check this game out as it’s worth your attention.

Disclaimer
This Nights of Azure 2: Bride of the New Moon review is based on PS4 copies provided by KOEI TECMO America.