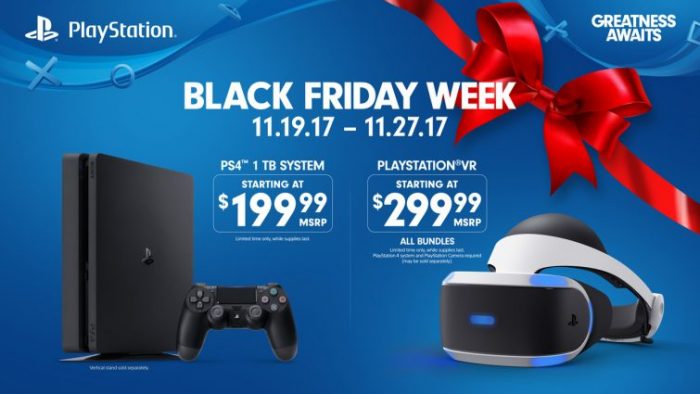 Sony is getting ready to start a sale on their PlayStation hardware, from November 19 to November 27! Come check out all deals on PlayStation 4, PS VR and more!

This is what Sony had to say about the deals:

Weâ€™re celebrating Black Friday early and for an entire week this year in the U.S., starting on November 19 through Cyber Monday on November 27, at participating retailers while supplies last.

First up, all PlayStation VR bundles will be available at a great deal at participating retailers. This includes the recently announced PlayStation VR Gran Turismo Sport Bundle at $299.99 USD (MSRP) and PlayStation VR Skyrim VR Bundle at $349.99 USD (MSRP). There has never been a better time to jump into the driverâ€™s seat in GT Sport for a heightened VR experience, or transport yourself into the virtual open game world of The Elder Scrolls filled with dragon-fighting action.

For PlayStation 4, the standard slim 1TB system in Jet Black will be available at $199.99 USD. This is the perfect time to pick up a PS4 as a gift for the special gamer in your life, or as a treat for yourself. You can also stock up on additional DualShock 4 wireless controllers while youâ€™re at it. All DS4 controllers, including the recently released translucent colors, will start at $39.99 USD (MSRP) at participating retailers.