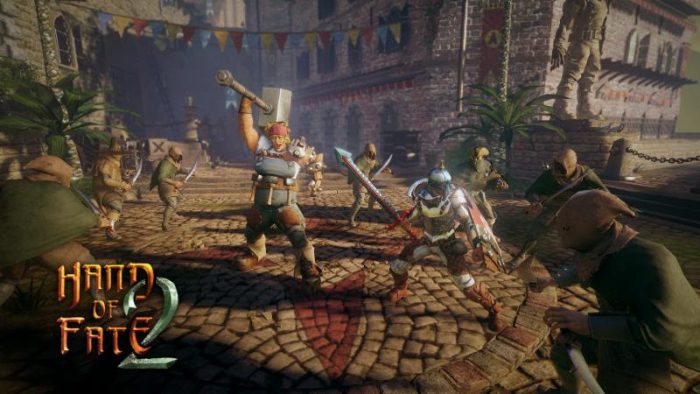 Defiant Development is back with a game where deck-building, tabletop role-playing and action are mixed. Intrigued? Learn more in our Hand of Fate 2 review!

This is a double review for Hand of Fate 2. The game was played by ThaRaven403 and EdEN. This review presents what they both had to say.

Following on the trail of the first game, Hand of Fate 2 will have you sitting at the infamous Dealerâ€™s table, crawling your way through 22 challenges, ultimately with the goal of defeating him and living. Each of those challenges is represented by a series of cards, that you will discover turn-by-turn until you reach the end of the challenge.

Now as you go through the challenge, which is done by moving your pawn over the cards the Dealer has laid on its table, a lot of things can happen with theses cards. Some of them will have you taking decisions for the situation youâ€™re facing on that card (defending farmers from thieves or siding with the latter for example), some will have you playing luck-based challenges like rolling dices for a required number or picking one out of four cards that are facing down in the hopes of picking a positive one, and some will send you straight to combat. 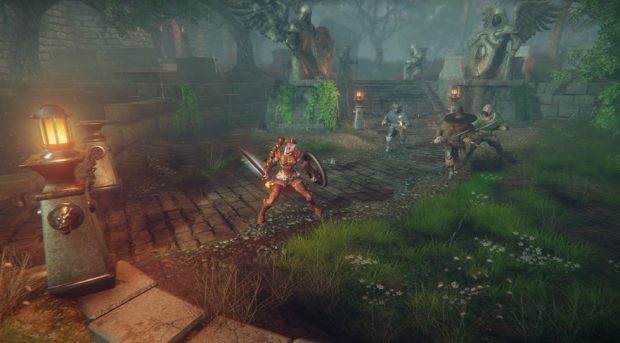 Iâ€™m normally not into tabletop card games, or any card battle games whatsoever, so I was a bit skeptical when I started this game. But after getting the hang of how the game works, which the Dealer does a great job at explaining you, I was ready to go and already doing some planning at the start of each challenge to carefully select the cards Iâ€™d need. The deck-building aspect of the game is really what differs from other games out there, and is surprisingly easy to pick up.

Even though itâ€™s part of how the game was made, I do have to say that I had a couple of moments of frustration because of the randomness of the luck-based challenges. When you have to pick one of four cards, with only one of the four being a â€œsuccessâ€ card (the others will penalize you badly or really badly), it really puts the odds against you, especially if itâ€™s the second or third time in a row you fall victim to this. Itâ€™s one thing to hone your skills to be able to survive the combat encounters, but if luck isnâ€™t on your side just a bit, nothing will save you from death and thus starting the challenge over. 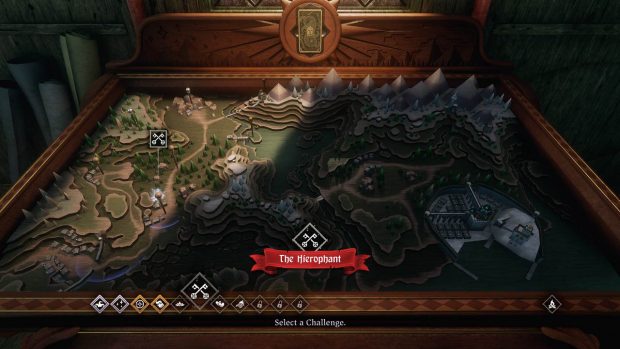 But in the end, even with that sometimes frustrating aspect, the game is a lot of fun to play. The Dealer is a quite intriguing character to face and the different genres all fit nicely together to create a fun and diverse adventure. I canâ€™t compare with the previous entry as I havenâ€™t played it, but I can say for sure that this one is a game a lot of people should play.

Since you can go back and replay challenges, I donâ€™t think the platinum trophy will be a hard one to get, as your skills and deck should end up getting you strong enough to conquer everything there is to conquer. What might prevent some people from pursuing it though is the fact that a couple of trophies are related to the luck-based games, and so you might end up playing for hours just to be able to roll three 6s during the dice game.

Hand of Fate 2 is a game that I was very much looking forward to reviewing after I interviewed the team at Defiant Development, and I have to say that the game did not disappoint. It presents a very interesting mix of an action RPG, a card game, a board game, and a choose your own adventure game, all rolled into one! Since ThaRaven403 has told you about how the game works, I figured for my part I’d take you on a ride through what happened during part of my first run.

Hand of Fate 2 starts you off by allowing you to select the genre of your hero between the two available cards that depict a naked woman and a naked man. After this, you are dealt cards that will tell your story and seal your fate. I got started with The Fool as my card, and after this the Dealer began to, well, deal cards to move the story along and to set the challenges and battles I would be facing.

I ended up in a forest in search of thieves who had robbed me of my father’s amulet, and I was damn determined to find it. I soon had to options to choose from, moving closer to eavesdrop on the group of thieves once I caught up with them, or keep my distance to see what they do. I obviously decided I should move closer to eavesdrop on them, and it was then I noticed four cards were dealt before me: three with that represent success, and one that represents failure. I got lucky and selected one of the success cards, which allowed me to hear what they were talking about: they were planning a way to rob people on the road out of their goods. 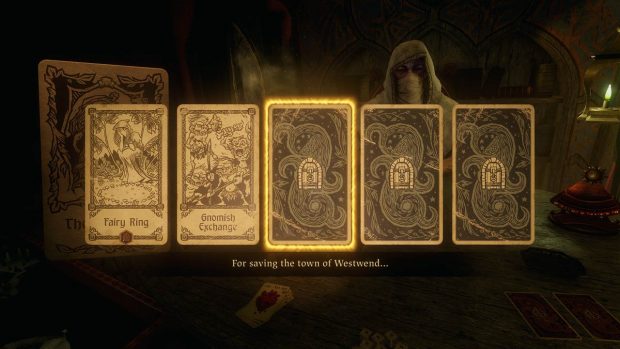 Noticing that a group of farmers were about to fall into their trap, I did the honorable thing and jumped to their defense, with my sword in my hand. This transitioned gameplay to an action section in which all the cards on the table play a part into deciding what challenge I would be facing. I ran into a group of four thugs, thieves with no honor who are fast with their blades and even faster at evading attacks. It was me and the group of farmers against the group of thieves, minus their leader. For the battle I was able to move around, attack, defend, bash and evade attacks in a small 3D area, trying to stay alive and to keep the farmers alive while I attacked the thieves.

I was victorious thanks to my mighty sword skills, and the farmers were certainly grateful for my help since, as they said, the thieves would probably have killed them after taking their goods. I was then rewarded with 12 pieces of food which was added to my inventory, which was good since I ate four pieces of food to recover the hit points I lost during battle. Food might not be the gold an adventure usually seeks, but who can say no to a good meal? But I still hadnâ€™t recovered my fatherâ€™s amulet, so of I went in search of the leader.

After travelling onward, night set, so I settled into a camp and started a fire. A goblin with fire-red eyes visited me, offering three pieces of equipment: a warriorâ€™s axe classified as a heavy weapon that can deal a critical strike as a special skill for 250% damage, armor breaker that can deal additional damage to armored foes, a soldierâ€™s sword which is quick and nimble for you to use with one hand to deal extra damage against Northerners, and a shield that could be used for extra defense and to reflect attacks from ranged opponents. Since I already had a sorta decent sword and a rusty but functional shield, I went with the axe and its additional power. And that was that. No curse. No surprise attack. Just a friendly goblin out on a quest to give items to the people on his listâ€¦ 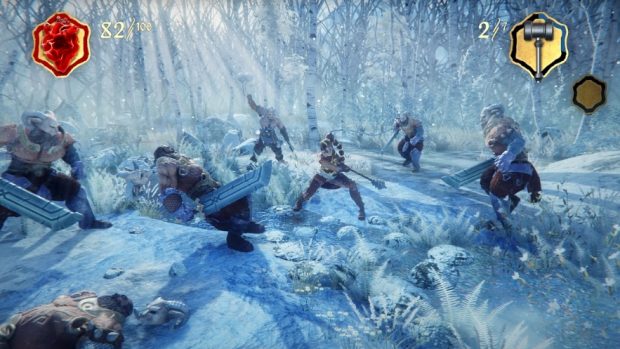 It was then that I ran into a card with a token in it, hidden in the forest. After once again selecting between four cards, three of which had a success and one with a failure, I came out victorious and ended up following a song deeper into the forest. I found a maiden in the middle of the forest who told me it had been 12 winters since she last had a visitor, and she rewarded me with a token which was placed on a tray on the right-hand side of the Dealerâ€™s table.

There remained one card on the map, so I traveled to what would certainly be a final showdown with the leader of the thieves. I follow the path and, after noticing several fallen trees and merchants who have met their end, I realize the leader has been busy with unsuspecting victims. Unfortunately for him, the other thieves have had enough of him bossing them around are ready to cut his throat and move on with their day. The leader offers me gold in exchange for protectionâ€¦ but since he did steal a precious amulet, he must pay for his offense with blood. The thieves then turn to attack me while the leader hurries up to hide, and they demand all of my food and gold or else theyâ€™ll stab me. I fight them, but not before switching my axe for my sword since thieves tend to easily evade heavy weapons. 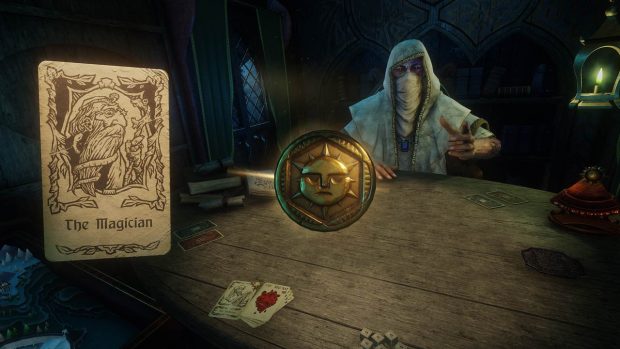 I make short work of the thieves since they have no idea who they were up against. The leader says heâ€™s a bard who was only after the greater good by keeping the thieves in check since they had gone on a murder spree before he joined them and started to steer them towards only stealing goods and allowing their victims to live. After he notices the anger in my eyes, he offers to return my fatherâ€™s amulet, but since he has no idea which one it is, he shows them to me so I can pick the right one. I had four options to choose from: a lion, a pharaoh, a bull and an eagle. I went with the lion, and ended up befriending the trickster who had stolen the amulet.

I was then taken to my camp to select between the cards in my hand to customize the look of the hero I would now be taking on further adventures. This marked the end of the first part of my challenge, and I was then sent on a new adventure with a new group of cards set out on the Dealerâ€™s table. What would this new path have in store for me? Would I be able to survive?

Final Thoughts
We both had a lot of fun with Hand of Fate 2, and feel that the mix of a card game, a board game, a choose your own adventure game and an action game is a solid one that keeps players engaged. It’s a mash-up of several genres, but the way they’re brought together just makes everything work.

Disclaimer
This Hand of Fate 2 review is based on PlayStation 4 copies provided by Defiant Development.

An interesting mix that deserves your attention