Moon Hunters from Kitfox Games is billed as a single player or co-op personality test RPG. Learn more about this colorful and charming release in our Moon Hunters review!

At the start of my adventure, I got to select between the four available characters: the Spellblade (Quick Type â€“ Trained in the high mountains), the Ritualist (Ranged Type â€“ Manipulator of mathematical magics), the Druid (Wild Type â€“ Shape-shifter with a fierce hearth), and the Witch (Strong Type â€“ Channels blood magic into raw power). There are other character options, but they first need to be unlocked during your adventure â€“ youâ€™ll know when youâ€™ve unlocked one since the game will tell you about it.

After this, I got to select where I was from, between the Dustfolk, a desert tribe that relies on the Seeker of Waters to survive the harsh summers, the Wolf Clan, a secretive tribe in the heart of the cedar forest, hiding in the shade of the great trees, or the High Tribe, a proud group of people of the mountaintops boasting of their closeness to the moon in the night sky – an extra pair of options were greyed out since I still hadnâ€™t unlocked them. After my first adventure, and based on my actions, I did manage to unlock a new option which I got to select for subsequent journeys.

After a short introduction video, I was then sent on my first adventure. My Spellblade hero was able to attack with the Y button, dash with the B button, and use a magical shockwave burst with the X button. The dash and the shockwave use up energy from the green bar below the characterâ€™s hit point bar, but fear not since the bar is quickly back to being full in a few seconds. You can also dance by pressing left on the D-Pad, and you can cheer by pressing right â€“ you know, for those times when youâ€™re feeling festive. 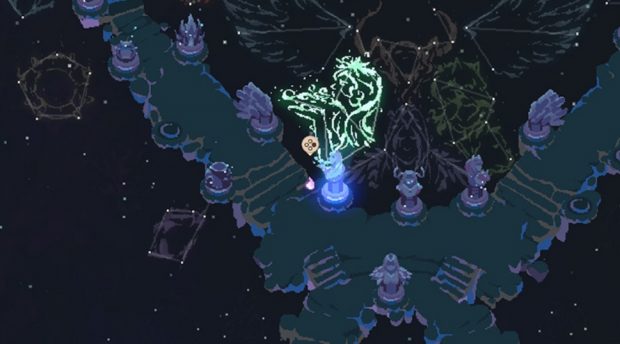 Each adventure is procedurally generated and different. As you start a new game, youâ€™ll get to play as a mythical hero who will go down in history as a legend, all based on the actions you take during your quest to find out what has happened to the missing Moon Goddess. After completing a journey, you can â€œrollâ€ a new character from the heroes you have unlocked, or you can play again as the hero youâ€™ve already taken on a quest. When playing on your own, youâ€™ll probably not go back to previous heroes youâ€™ve played as since youâ€™ll want to see what each character brings to the table, but when taking on multiplayer sessions with 2-4, being able to transform into previous heroes with the corresponding stat boosts/deficits rolled from that adventure will be very practical. 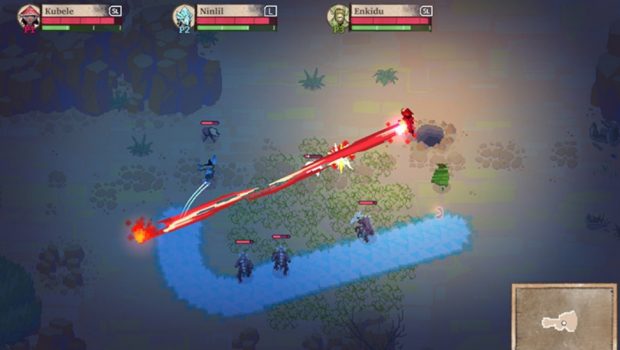 For example, during my first journey, I ran into a well where I could hear a faint noise coming from inside of it. There was a bag outside the wall, and I was presented with the choice of grabbing the bag and its contents or calling to whoever was inside the well. I decided to call out the person inside of the well, and when he exited the well the game rewarded me with some compassion points since I indeed showed compassion to the man in the well. By the end of my journey I realized that a couple of choices I made, which seemed innocent enough at the time, ended up affecting how others saw me due to how when I SPOILERS during the halfway point of my quest, it greatly affected the village (and yes, that big ALL CAPS SPOILERS alert is there for a reason).

A bit after this I ran into some hostile creatures I dizzied up with my shockwave attack before cutting them down with my magical sword and its combo which during the last hit conjured up a small whirlwind that dealt some extra damage to enemies. After defeating one of them I found some honey, and the game informed me that I would now be able to cook with honey in subsequent journeys. I was later able to camp, and it was then that I noticed that my story had begun to be written: I traveled with two swords quicker than the wind (the whirlwind attacks), and the tribe came to know Dumuzi (my name) as a synonym of kindness and gentleness (since I helped the person inside the well). 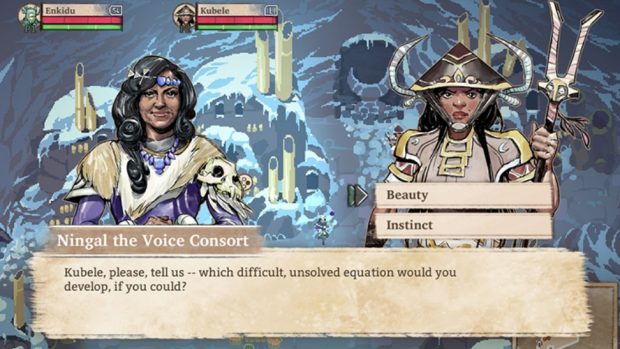 After setting up camp, I was able to check and improve my stats to see what type of hero I was. They are: Endurance (Max Health), Spirit (Energy Regen), Strength (Physical Damage dealt), Intellect (Magical Damage), Faith (Max Energy) and Charm (Leadership). There were five available activities for me, each able to improve my base stats. I could rest (bump to Charm and Endurance), Stargaze (bump to Intellect and Faith), Hunt (bump to Strength and Spirit), Keep Watch (bump to Endurance and Faith), or Cook (bump to stats based on what I cooked). I decided to cook, and since I had flour and water, I figured I could mix the two and see what I ended up with. There are 104 recipes available in the game, and combining flour and water gave me Flatbread, adding it to the list of ingredients I could use in this and future journeys.

I then reached a town in which I found a merchant from whom I could purchase skills to improve my hero thanks to the opal I secured from defeating enemies, destroying jars or cacti. These skill boosts included Momentum by which when landing three hits in a row I could get a strength and speed boost, Custom Hilts so that normal attacks do more damage, Ocean Breath so that dashing costs less stamina, and Viperâ€™s Dash which made it so when dashing I could deal damage to enemies, doing an attack at the end of a dash. Other merchants offered some different skills so that I could mix and match my particular build, but as a general rule, the higher the cost of a skill, the better the overall benefit to my skill set. 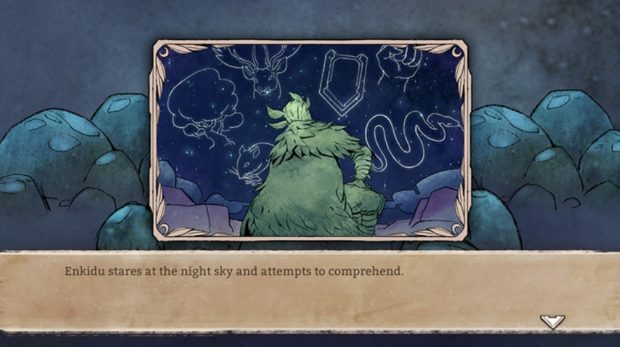 So, if youâ€™ve already played Moon Hunters on, say, the PlayStation 4, what is different on the Nintendo Switch? Along with being able to play at home or on the go without missing a bit, you will also have longer loading times for areas (roughly 30-70 seconds or so when transitioning between locations), the console exclusive Eternal Echoes DLC which adds difficulty modes, a final boss fight, an endless arena, the new Snowdancer character and a snowy village for you to explore, as well as three exclusive companions for your Switch adventuring. 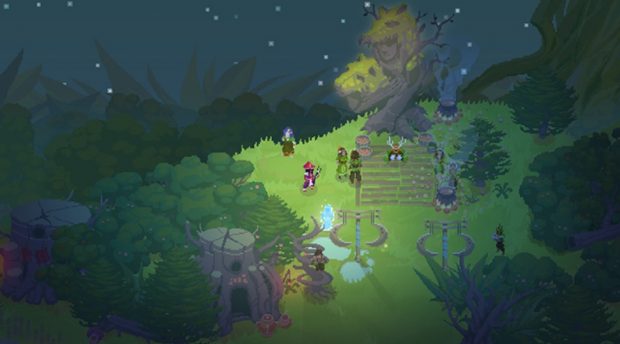 Moon Hunters had a long road from when it started as a Kickstarter crowdfunding campaign and the release of the game on Nintendo Switch. There have been ups and downs, delays in development towards its original Steam release, console ports, and its arrival on Nintendoâ€™s hybrid console but, in the end, the wait for Nintendo fans has been worth it. Weâ€™re getting a game with console exclusive DLC at no extra cost for a more robust adventure and, other than the long loading times between areas (which can hopefully be optimized by way of a patch), playing this on your own or with a full party of heroes, is an entertaining experience. 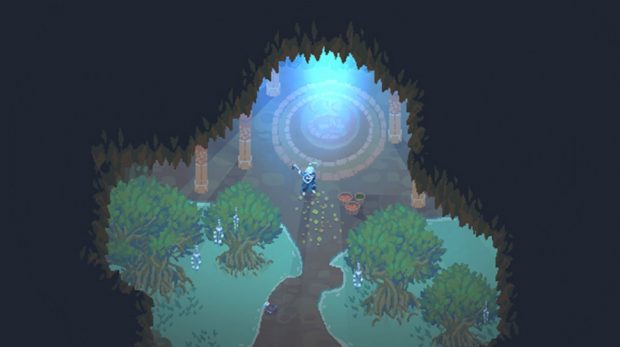 Youâ€™re pushed to move forward thanks to the gameâ€™s story, the background of each hero and the ways you can impact on how each tale develops, all in short journeys that take roughly an hour or so. I highly recommend Moon Hunters if youâ€™re looking for a pixeltastic release you can take on short adventures as needed, especially if you have a bunch of friends to play with. Due to the Nintendo Switchâ€™s nature, you can instantly have two-player sessions, and if you have a couple of extra Joy-Con or other Switch controllers, you can take on a full four-player journey on the Switchâ€™s screen while in Tabletop Mode.

Disclaimer
This Moon Hunters review is based on a Nintendo Switch copy provided by Kitfox Games. 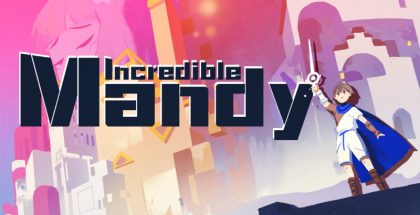