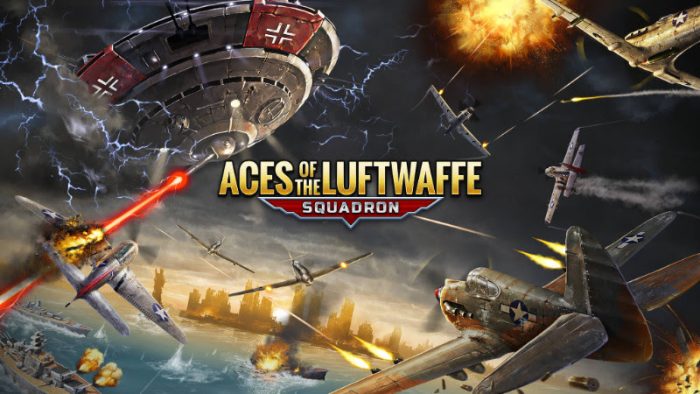 Aces of the Luftwaffe – Squadron is a World War II shoot â€˜em up set in an alternate universe. Learn more about it in our Aces of Luffwaffe review!

The opening notice is a funny one since it goes along the lines of â€œThe following events are fictitious and any resemblance to actual persons living or dead is purely coincidentalâ€ since this is a very fantastical release with settings and action-packed scenarios that definitely never existed during World War II.

Anyway, your job in this top-down shoot â€˜em up is to survive the onslaught of enemies and attacks in each level as you try to eradicate all enemy forces as fast as possible by making the most of your skills and those of the other three pilots in your squad. Said pilots are AI controlled when you play on your own, but human players can also take control of the squad members to maximize their potential. It is up to you and your team of maverick pilots to stop the Germans in their tracks across several levels of shooting mayhem.

To have a chance of surviving the onslaught, you should make sure to grab as many power-ups as possible since they will grant you better weapons, increased firepower, special attacks and more. You can also pick up medals from downed enemy planes, and collecting them goes towards your overall score for that level while also allowing you to level up your characters thus earning skill points you can use to unlock and improve skills in a skill tree for each of the pilots.

Your team consists of four pilots: Melissa Monroe, Steve Davis, Mark Taylor and John King. Steve is a bit of a weakest link since he sometimes falls asleep in the cockpit and that requires the other pilots to protect him. Melissa hates changing altitudes and she will sit out some parts of a level if she is unhappy with the squad having to fly too high. John is a bit of a hothead and will sometimes get… well, for lack of a better word, ‘Air Rage,’ flying wildly around the screen, doing damage to any plane it touches â€“ be that friend of foe. Poor Mark is the most sensible of the team since he suffers bouts of air sickness and when this happens you have to move slowly until he recovers

The team constantly communicates with each, and all characters feature full voice acting, which adds makes it easier for players to love or hate each of the squad members. Bosses will also chime-in with some chit-chat here and there during a level or during the proper boss fight, moving the story forward with every conversation.

The playing field is quite big, with the planes on the screen, be that yours and those of your enemies, looking relatively small against the colorful backdrops – it gives the game a very clean and polished look that allows you to focus on the danger at hand. Bosses are definitely way bigger than any of your squad members, so be ready to evade their attacks and their vehicles since touching a boss will deal considerable damage to you and your squad members.

The one thing I need to complain about is that the loading screens in the game take forever, so youâ€™ll be looking at them for over a minute for each time the game has to load, which is not fun. Hopefully a patch or two can speed things up, but itâ€™s something I had to mention â€“ the good news is that once youâ€™re inside a stage things run without any additional loading.

Aces of the Luftwaffe – Squadron is a fun shoot â€˜em up with great graphics, a nice soundtrack and solid voice acting that comes together in a solid indie release. The story is well-written and the humor will give you a chuckle here and there since the characters are full of personality and are very likeable. This game is definitely worth your time, and if you are an achievement hunter you will be able to spend even more time with this release since there are in-game achievements to unlock with your actions and performance.

Disclaimer
This Aces of the Luftwaffe â€“ Squadron review is based on a Nintendo Switch copy provided by HandyGames.