Grab a friend and enter the SNK dream match in this frenetic fighting party game featuring everyone’s favorite female fighters!
Play online or with friends as SNK’s iconic heroines in the brand-new 2 vs. 2 fighting game, SNK HEROINES Tag Team Frenzy! Activate Special Moves with a single button, and make use of special items to change the tide of battle! However, the fight isn’t over the moment you’ve chipped enough health away. Once your opponent is on the ropes, utilize your Dream Finish technique to win the match! Spectate on other battles online, use your winnings to buy voice clips and accessories in an all-new costume system, and customize your favorite heroine to your heart’s content!

This is a double review for SNK HEROINES ~Tag Team Frenzy~. Both the_nmac and Tracey reviewed the game on the Nintendo Switch. This review presents what they both had to say.

I love SNK fighting games. I discovered King of the Fighters ’94 back in the day in a local bowling alley and I immediately wanted to learn more about the game and how it brought in characters from SNK staples such as the Fatal Fury and Art of Fighting series, as well as introducing new fighters and bringing in characters from releases that were never a fighting game, to begin with. The hectic gameplay featuring 3 vs. 3 battles was a first for fighting games and is now a beloved formula we see in other games that pay homage to that important contribution to the genre. You can imagine why I was very much looking forward to reviewing SNK HEROINES ~Tag Team Frenzy~! 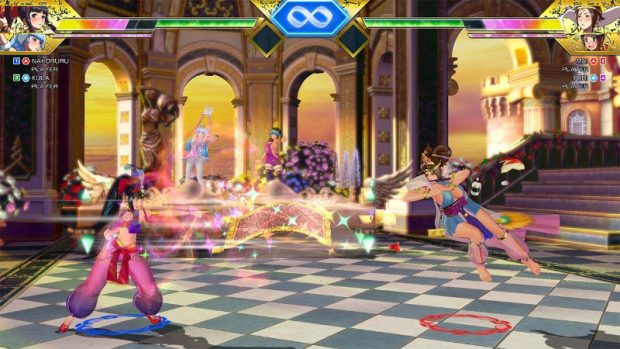 Let’s talk a bit about the basics of the game. It features 14 fighters from SNK fighting series, including a gender-bent Terry Bogard who is now also female, wearing a Fatal Cutie cap and some short shorts to really drive the point home. You’ll also find characters such as Mai Shiranui, Yuri Sakazaki, and Leona Heidern, and there’s one more on her way as DLC at a later date. Something I need to get out of the way is that the costumes the characters wear are not what I was expecting right from the start, and it’s something that could also rub some people the wrong way: the costumes. Instead of being in her traditional red ninja garb, Mai was in a cow bikini with horns and a tail. Leona replaced her tough army outfit with a cat bikini outfit. While those two are the main examples of what I think was out of place for the game, most of the fighters have also been given skimpier outfits.

The reason for all of this? As the game’s story goes, the characters have been kidnapped and have been taken to a pocket dimension where they’re forced to fight each other by an evil, and very perverted, male villain. To be able to escape and go back home, you must be the last pair of ladies standing when all is said and done, and that includes defeating the villain in a final 2 vs. 1 battle! And it is because of said perverted male villain that the girls are wearing much skimpier outfits than usual since he needs their stress and fear. Because. Because reasons. 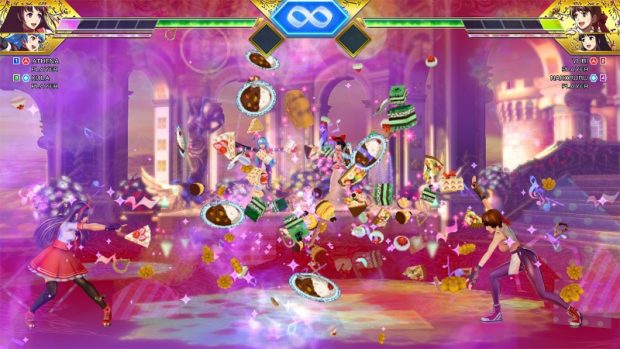 This time there are major changes from what SNK has traditionally done in their fighting games. The first major change is the need to use a finishing maneuver to end the match – if you don’t land this finishing move, then the fight will carry on even if your opponents have no health left. Also, your life and your special energy share the same meter, which is definitely interesting. As you take more damage, you will have more energy available for your special moves, but this does mean you don’t have super moves you can access when you’re not trying to end the match. The other major change is that all special moves for every character are tied to a single button. This simplifies the fighting game formula, allowing you to press a button and a direction on the left analog stick or the D-pad to activate a move. Any special move you use will use up your energy, and if you run out any subsequent moves will be greatly underpowered.

There are some other things too, as it’s a tag team match and you can change to your partner on the fly with the ZR button, as long you are on the ground. There are also some spheres on the playfield that can be destroyed giving your support character a weapon to throw in the battle or an item for you to use, and you can control this with the right analog stick to where it needs to go. It can be a wall-thing to keep your opponent at bay, a banana, a pot, a wreaking ball, even one item in particular that makes the screen very pixelated, which makes it a lot harder to fight properly.

The simplification of the fighting game mechanics by moving all special moves to a single button might not be for everyone since it definitely caught me off-guard. I have seen other games try this to a degree, but they also offer fighting game veterans the option of controlling the fights in the traditional sense. The game is more aimed at a casual sub-set of fighting game aficionados, but the way the fighters are presented in skimpy outfits might be offputting to people who don’t take on fighting games that often, so it’s a weird thing to do. 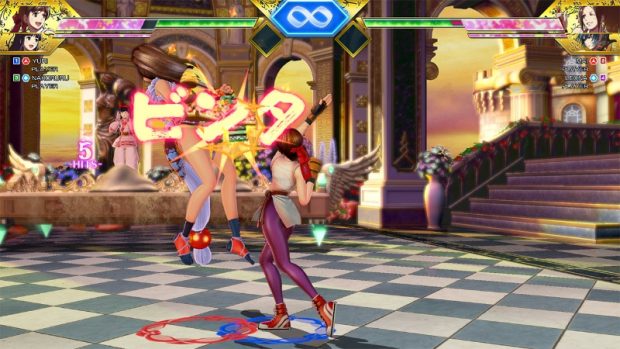 The game does some cool things in the story since depending on the two characters you pick they will have some unique dialogue between them, as well as a different start and ending sequence, and you’ll also get an ending for each character once the credits roll. It gives each playthrough a slightly different feel. The game has a decent character customizer as well since you can unlock additional costumes and a ton of accessories for different parts of the body so that when playing online your characters can look unique.

The game did seem to suffer graphically. The 3D character models seemed a bit off, with a bit of an uncanny valley look in their eyes. I’m a big fan of 2D fighters with sprite characters, so the move to 3D, as was the case for the latest King of Fighters release, is something that does take a bit for you to get used to. I know 2D is much more expensive to create for a fighting game, but then you have 3D games like Tekken which make it work – maybe because that series started as a 3D release right from the get-go? I also thought the loading times for each battle were a little long since I had to wait 20-30 seconds between matches. 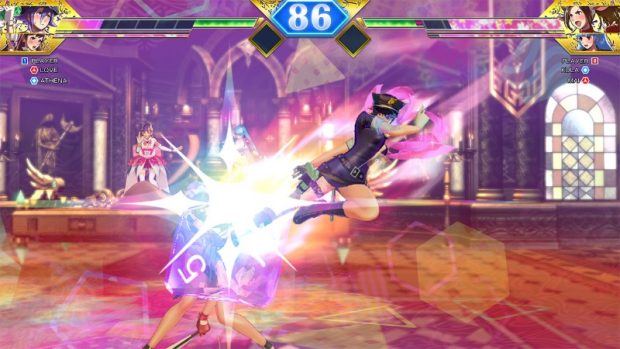 The control set up gives you one button for weak attacks, one button for strong attacks, a throw button, and then all your specials are mapped to a single button, activated by pressing a direction on the left analog stick or the D-Pad. The Dream Finish, the finishing move you need to land to win the match, is mapped to the R button, and if you want to block youâ€™ll need to press and hold the L button. If you donâ€™t like this, you can customize the buttons to something you think feels right.

You can play online in 2 vs. 2 matches, or take on some local couch multiplayer bashes. Thereâ€™s also a spectator mode in which you can watch how other players battle it out online, and you can even bet on who you think will win by using the in-game currency. The winnings you get from these bets, as well as from fighting online and offline, can be used to purchase various items to customize your fighters. 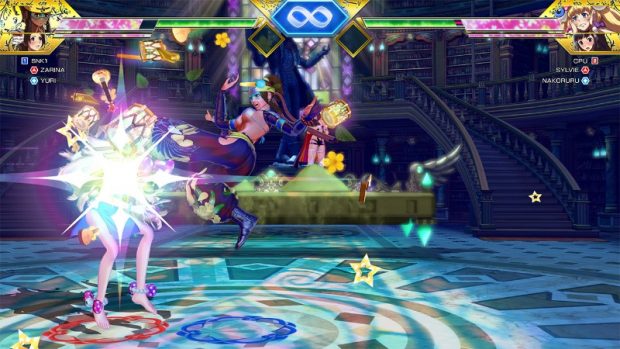 While the simplified fighting mechanics can be something that not all of you like, SNK HEROINES ~Tag Team Frenzy~ does something else that will draw a lot of attention: all fighters are featured in outfits that are a bit too small to be considered proper outfits at all. Since itâ€™s an all-female cast, I was sorta expecting a bit of fan service here and there, but the way the game is presented does at sometimes go too over the top, so this will definitely not be for everyone.

We both had fun with SNK HEROINES ~Tag Team Frenzy~ and its simplified set up for special moves, and we did also like how the health bar and the special moves bar are directly related, affecting how much energy you have for special moves as you receive more damage. But we both feel that the costumes for the all-female cast and how they’re presented is a bit too heavy on the fan service. But if that’s something that doesn’t bother you and you want to try a fighting game that does a handful of things differently to stand out in its genre, then you can certainly check this one out!

[Beyond PlayStation] State of Anarchy: Master of Mayhem Review