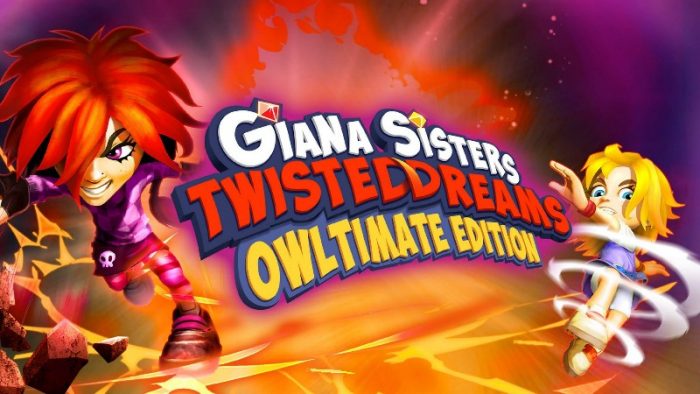 Black Forest took the game, then known as Project Giana, to Kickstarter to try and secure the funded needed for its development. This was way back in 2012, which is ancient history in the Kickstarter world â€“ to give you an idea of how far back this was the game had a stretch goal for an Ouya port. Yes, that Ouya. Itâ€™s interesting that the game is now on Nintendo Switch (and that it was released on the Nintendo Wii U before this new port) since the Giana Sisters pretty much began their life as a Super Mario Bros. clone. Yes, that Super Mario Bros. Oh, and thereâ€™s also a Giana Sisters game on the Nintendo DS that was released. Weird twist, huh? 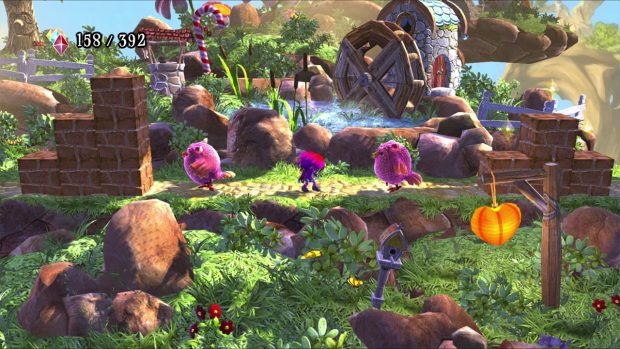 In Giana Sisters: Twisted Dreams – Owltimate Edition you play as the titular Giana who must go into a magical vortex that has ended up taking away her sister Maria. The vortex will take you to a faraway and unknown magical land where you will need to make the most of your platforming skills to save the day. A few minutes into the game you will find Maria, but not before a large and scaly dragon grabs her and swallows her hole. Your mission will then require you to chase the dragon so that you can rescue your sister and return to a normal life. 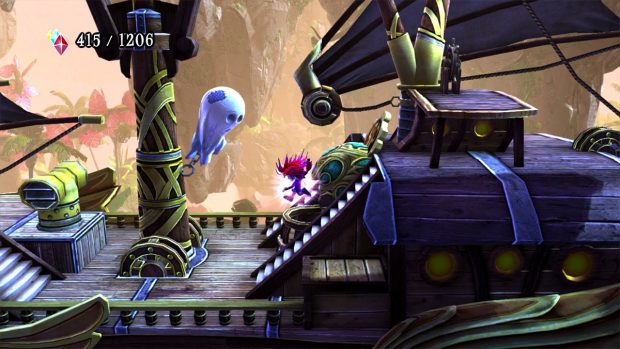 The game features a main story campaign which you can play in Normal or in Hard. Normal offers levels that are less dangerous and that offer more checkpoints from which to respawn, while Hard is harder but unlocks every level you finish so that you can play it in the other modes. The extra modes are Score Attack in which you try to collect gems as quickly as possible as you defeat enemies on the side, Time Attack that allows you to try and speedrun a level as you try to get from point A from point B â€“ the game suggests that you ignore crystals since time is what matters. Hardcore has no checkpoints, and to gain access to a chapter in hardcore you need to complete the chapterâ€™s boss fight while playing on hard.

And if youâ€™re still looking for a bigger challenge after playing Hardcore, you can give Ãœber Hardcore mode a try. For this particular mode, if you die â€“ for any reason whatsoever â€“ you will have to restart from level one. This is a tall order, which is why youâ€™ll first need to prove that youâ€™re up for the challenge by first completing each level in the game while playing on Hardcore mode.

The controls do get a bit of getting used to because of how your actions will affect the world around you. You will move around with either the left analog stick or the D-Pad, with your jump being assigned to the B button. You can also wall jump on some surfaces by hugging a wall and pressing the B button. You can only take one hit, so you should always grab the pink shield gems that grant you an extra hit. Most enemies can be defeated by jumping on their heads, but you do need to watch out for those of a spiky variety that will damage you. Giana can hold her breath indefinitely while underwater so that you can explore each area at your own pace. Water is blue and is OK. But if you see a green or purple liquid, that one is going to be deadly! 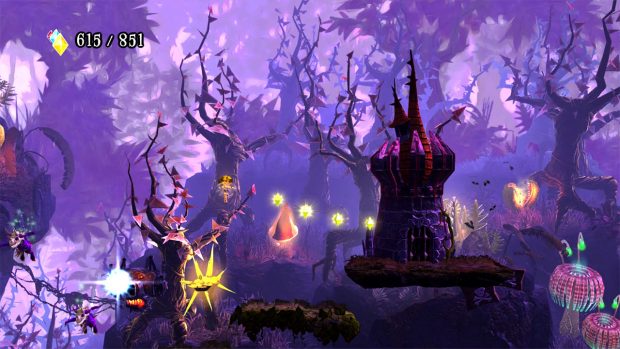 As you explore each stage, youâ€™ll get to collect gems to increase your grade for the level when you complete it. Blue crystals can be collected without issue, but if you find yellow and red crystals you will only be able to collect them while youâ€™re playing as the right version of Giana â€“ yellow crystals can be collected by her regular self while red crystals can be collected by her punk self. You can change around by pressing the ZR button, but you can also sometimes change versions when dashing with the Y button or when twirling with the X button â€“ this is because the game will change you to the â€œcorrectâ€ version of your main character so that you can carry on with your adventure and remove any obstacles on your path. 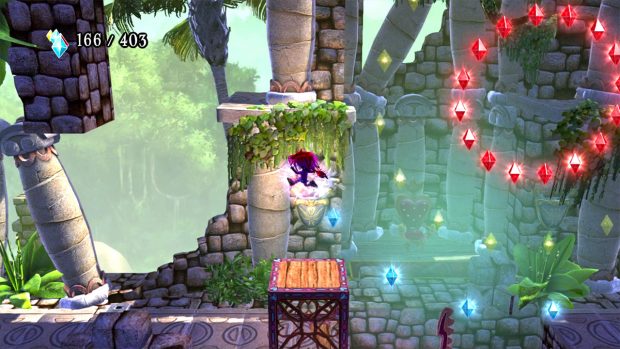 Twirling with the X button is very helpful since it will allow you to hover down to safety at a slow but steady pace. If you defeat an enemy while in the air you will be able to dash or twirl once again, removing the need to touch the ground to reset your skills. Dashing is a very useful skill since it will allow you to target and defeat airborne, thus allowing you to dash or twirl again as you aim at landing at a specific platform in one single motion. Youâ€™ll probably die a bit as you play the game since youâ€™ll need to learn which sections are best played with one or the other version of Giana since enemies change, and so does the environment. Some platforms will also move only when you are playing as a specific version. 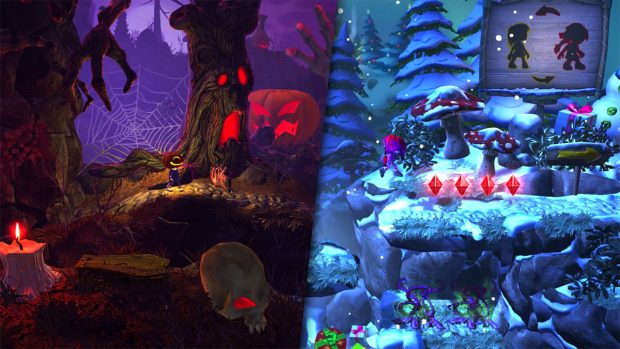 If youâ€™re the type of gamer who likes to 100% a game, then youâ€™re going to spend a while playing this one because it requires a lot of trial and error and patience as you search high and low in all stages for all available crystals while also trying to stay alive and in one piece. Why? Because at the end of a level you will be graded with one to three stars depending on how many crystals youâ€™ve collected from the total number of available crystals, and if you want to get the full five star rating for a stage you will need to finish it without dying more than five times in total. There are also large crystals to collect as well that will unlock images in the gallery for you to enjoy. 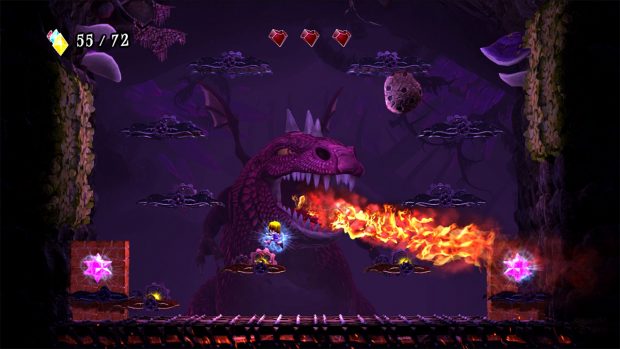 So, what makes this the Owltimate Edition? The game is available at 1080p at 60 fps, includes all previously available levels as well as five extra levels. There are special levels based on either a Halloween or a Christmas theme, so youâ€™ll get to play a Halloween Special, and a Christmas Special from 2012, as well as a Halloween Special and a Christmas Special for 2013, but the Halloween level for 2013 is available either as a normal or a hard stage. I also suggest that you give the tutorial stage in the Extras menu a go since itâ€™s not that long and it will teach you everything you need to know.

Giana Sisters: Twisted Dreams is a fun, colorful and challenging action platformer that has now found its way to the Nintendo Switch. This being the Owltimate Edition means that itâ€™s the most packed version of the game with 40 levels in total and plenty of collectibles to find in each one. Go give it a try!

Disclaimer
This Giana Sisters: Twisted Dreams – Owltimate Edition review is based on a Nintendo Switch copy provided by THQ Nordic.