[PlayStation 4] My Time At Portia Review

My Time at Portia was born following a successful Kickstarter in 2017. Developed by Chinese studio Pathea games an published by Team17, famous for the Worms and Overcooked! franchise. In this game, you land in Portia and must build your fame as a crafter following on your dad’s footsteps. Learn more in our My Time at Portia review!

Arriving in the enchanting town of Portia, youâ€™ll be able to start a new life and set to work restoring your Pa’s neglected workshop to its former glory. Armed with your Pa’s workshop handbook and workbench, you must gather, mine and craft your way to being crowned the number one workshop in the whole of Portia!

As well as crafting and building thereâ€™s plenty more to do and discover in Portia including growing crops, raising animals, befriending the towns quirky inhabitants and uncovering the mysteries this charming post-apocalyptic land has forgotten. How will you spend your time at Portia?

My Time at Portia isn’t a game that can be done in a few hours or rushed, and it gets clear as the game starts and you are invited to create the avatar you’ll be following for a good while. You can choose if its a boy or girl, and there are a lot of customizations available. If you can’t wait to get into the action, a random avatar can be generated for you.

Once the game begins, you are greeted by a quote, that quite honestly summarizes the experience you’re about “Start a new life in the enchanting town of Portia! Restore your Paâ€™s neglected workshop to its former glory by fulfilling commissions, growing crops, raising animals, and befriending the quirky inhabitants of this charming post-apocalyptic land.“. My Time at Portia is set in the far future, where an advanced civilization collapsed, and you can see those magnificent ruins in the horizon, akin to Final Fantasy X and Zanarkand. 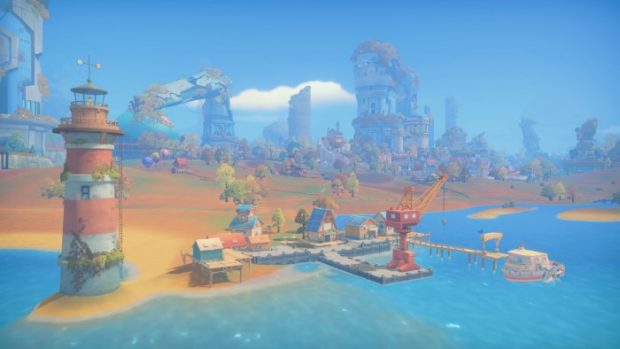 You arrive in a boat in Portia, which feels like a very remote place given the amount of green land and crops this island has. As you know by now, your goal will be reviving your father’s crafting shop and bringing back the fame it once had. As you visit the neighboring city, you’ll notice that most people know your father, which made me care for the people living there, as each one has its own story and doesn’t feel like mindless NPCs.

Now onto the gameplay. I found my first hours to be VERY confusing in My Time at Portia, until I found the wiki that details the different characters, their relations to you and most importantly, the first steps to begin in this game. After a few hours, once I’d gotten the hang of this game, I was honestly amazed how good it was, even though there are some issues with the gameplay, which I’ll get back to in a little while. 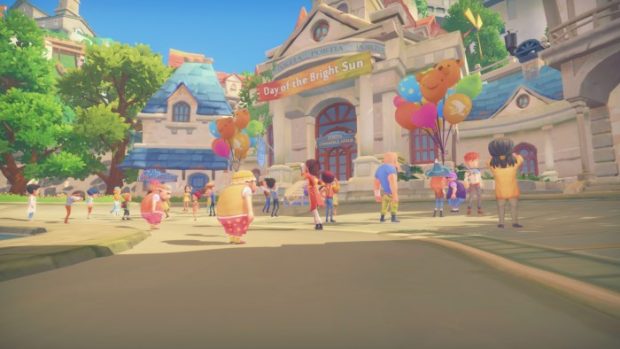 You start with chucking wood, repairing basic stuff, then you can go to the more complex item crafting, then you’ll build yourself a furnace which will let you smelt stuff, and then even more complex machinery to help you with your daily needs. As you progress, the requested tasks don’t become that much harder, but they require more steps to achieve, and there’s no direct rush on you to deliver crafted item at the time so most of your time you can go at your own pace.

Speaking of time, the game is split on different days starting at 7 a.m. and ending on 3 a.m. at most, because if you’re still up at that time, you’ll collapse from exhaustion and wake up in your bed – without consequences mind you. The time of day is coherent, and shops will be closed outside their business hours, people will be found at the coffee shop early in the morning. The whole basis of the game is based on that timing, which I thought was awfully well implemented, and realistic since each character has his own schedule.

Now that I’ve mentioned the different gameplay elements, I need to talk about the different issues that I encountered while playing. In the “minor” annoyances ranges, I need to mention that most of the text is written on a semi-transparent text bubble, which wasn’t opaque enough, so in some cases, it was painfully hard to read through. Another minor annoyance is that the main character CAN’T get near the water and if his toes touch it, the screen goes blank while it loads I imagine, then you’re back a few feet behind.

Another issue is about the time I mentioned earlier: nearly every item required in the game is processed from the raw materials found on the field or in caverns using the different machines built. Processing those items takes time, so your best bet is to load the machines before doing something else. I’d have liked a fast-forward feature which would have allowed me to warp directly to when the items are done, trading off a few in-game hours in favor of the realism of waiting. I already mentioned that you collapse from exhaustion at 3 a.m., and since the world is huge, I often used this feature to spawn back at my house instead of slowly walking back there. 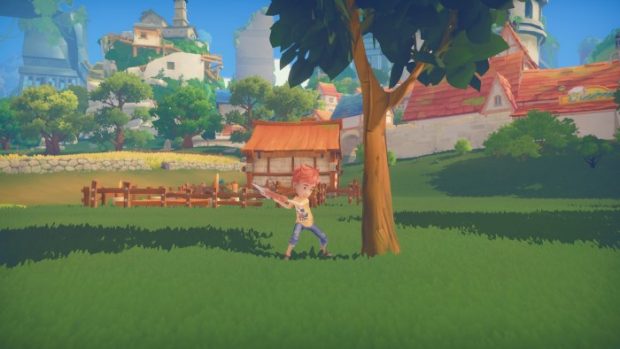 My first major issue I had with My Time at Portia is sadly one that was done this way by design: the painful inventory management. The game makes it clear that you start with an anemic stash of only a few items wide, and even when purchasing your first wooden chest, it’s still a lot to manage because the item has to be in your hands when crafting, instead of just taking it in your inventory. This means that every time you want to craft something, you’ll open the blueprint, start crafting the item, realize you’re missing one, go to your chest to retrieve it, realize you don’t have free space in your chest to drop an item from your hand, and so on. It’s as painful as I just wrote, and doesn’t get better until later when you can buy expensive additional in-hand slots, and by then, I was already way beyond annoyed with it. To add to the frustration, there’s also a slight loading time when the inventory is opening.

The second major issue I had with this game was when fighting enemies. The camera is awful, and the gameplay is horrible. It tried to do something like a western RPG where you fight and defend but failed miserably, and the combat became one of my most hated segments. It wasn’t that bad until at the 6-7 hours mark, we get into a dungeon and must fight many monsters at once to reach resources farther in. I ended my gaming session rage quitting.

As for the presentation, I was very impressed by the world in itself: it is gorgeous, huge and the old civilization taken over by vegetation was amazing to look at. On a standard PlayStation 4 console, there are also some rather long loading times. Each time you enter a house, shop, or cavern, the loading times are high (at least 30 seconds at a time), but coming back to the overworld, the loading times are close to the minute, and are enough to make your eyes roll while you’re complaining to yourself because you accidentally entered a house. 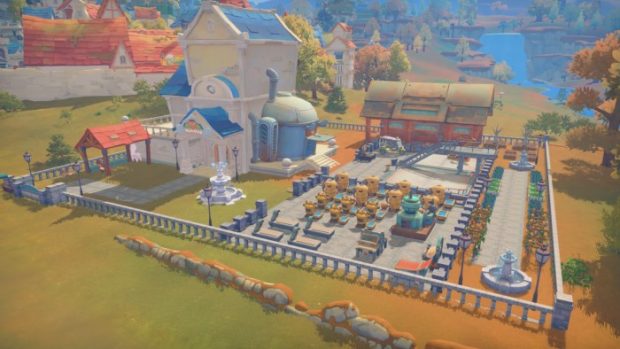 Final Thoughts
My Time at Portia is a huge and gorgeous release that can easily fill a few weeks of your real-life time by the amount of things that can be done in it, if you can manage to get over the different issues you’ll encounter through the campaign. This is a game that could be updated in future updates, but as of now, there were certainly some issues that kept me from carrying on with it.

Disclaimer
This My Time at Portia review is based on a PlayStation 4 copy provided by Team17 Software.

Good basis for a new franchise, but this one could use some extra polish