Deathâ€™s Gambit on PS4 brings a mix of Souls-like combat with a Metroidvania twist. Now that a physical edition has been released it’s time to revisit the game. Learn more in our Death’s Gambit review!

The story kicks off with you seemingly waking up from what you thought was your death, with demon Vrael telling you that it’s only the cowards that survive. Around you is a scene of desolation, as you realize that your men have died since Vrael summons you to go to the town of Vados to honor their families. On your way you’ll meet Death, who has you sign a contract that will set you under its service, but will also allow you to be resurrected should you die. From there, the story will evolve through bits of information you’ll get, mostly after dying.

Even before learning the first details of the story, the first thing you’ll do is choose from one of seven classes for your character. Each comes with different statistics that will affect things such as strength, health, or stamina. There are classic classes such as the Wizard, who’ll be weak in health but able to cast long-range spells, or the Soldier who relies on pure brute strength, as well as some more unconventional classes such as the Blood Knight who can recover its health, or the Acolyte of Death that wields a giant scythe. For the purpose of this review, the last one is the class I spent the majority of my time with. 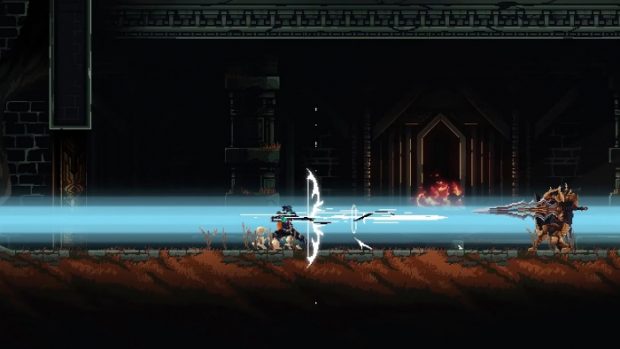 After selecting your class, you can also pick a gift, an item that will kickstart your adventure. There’s a selection from seven items, either stat-boosting equipment pieces such as a shield or limited use items like bombs that deal a lot of damage. My personal choice was a helmet that boosts vitality since I am not an expert when it comes to difficult combat.

This brings us to the combat aspect of the game, which is where most of the fun is. The system shares a lot of similarities to the Souls series, where your every move consumes a bit of your stamina, and once it’s depleted, the only thing to do is to avoid being hit since enemies deal some considerable damage. Whether it is your attacks or a dodge roll to avoid being hit, you have to plan and time them just right, which means that every enemy you encounter will be a new experience… and most likely a new death. 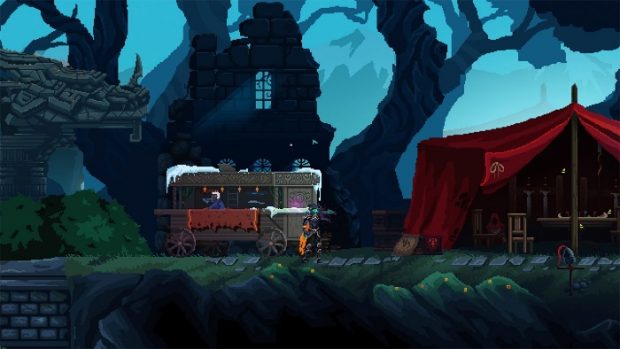 When you die, you’ll drop one of your plumes that serve as healing items, and the only way to get it back will be to go back to where you died to pick it up or regain them by sacrificing your hard-earned shards at the Death statues. Speaking of said statues, you’ll encounter them every now and then, as they serve as resting/saving points as well as upgrade hubs where you can level up your stats.

As far as the visuals are concerned, the game has a nice retro pixelated look that reminded me a lot of the good old Castlevania games. There’s a lot of pretty things to look at, both in the characters’ details as well as in the backgrounds for the areas you will visit, which provide an excellent atmosphere for the game. 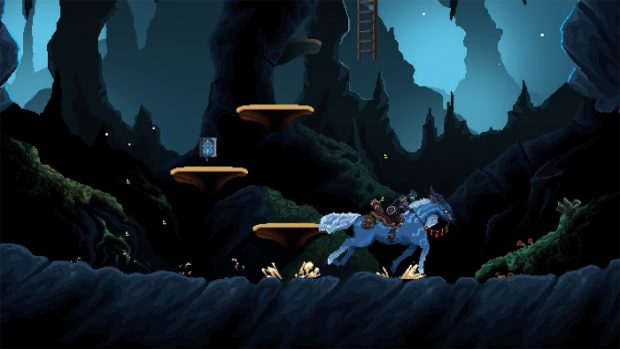 While I’m not generally a fan of Souls-like games, I found myself quickly picking up this game’s play style and death system, trying to make my way deeper into its world. One thing I truly enjoyed was the fact that you were not starting over from the beginning when you die, at least if you had recently visited a Death statue.

I also really liked the selection you have for the different classes. Not only does it give a lot of replay value if you decide to try them all, but there’s also a bigger chance to find a class that will fit your playing style. You also have access to a skill tree that grants different passive skills for your character, that you can have evolved in many different ways, again making for some different character build. 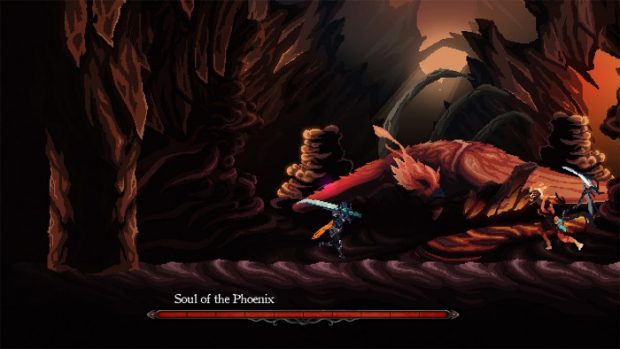 The one thing I didn’t really like was the story or rather the absence of one. You don’t get much about it apart from some extra stuff here and there when you die, so it’s hard to feel engaged in whatever mission you have that has Death bringing you back every time you die. It was a good thing that the world you explore and the battles are interesting, or else the story wouldn’t be a selling point for me.

As for the trophies, you’re in for a real challenge! Beating all the bosses will be one thing, but you’ll also have to beat their heroic version, which is a powered-up version that becomes available when you revisit each one after defeating them the first time. Apart from that, you’ll need things like upgrading your feathers and unlocking 14 talents, but the biggest challenge will be a single trophy that requires you to kill the final boss in under four hours, without quitting the game and without leveling up. If you can achieve all those incredible feats, a shiny new Platinum will be yours!

Final Thoughts
Even a year after its original release, Deathâ€™s Gambit still stands as a great Metroidvania Souls-like game on PlayStation 4, as a great part of a batch of excellent Metroidvania games such as Guacamelee! 2 and Dead Cells. Death’s Gambit is a hardcore experience that will provide you with a lot of fun for your buck.

Disclaimer
This Death’s Gambit Review is based on a PlayStation 4 copy provided by
Skybound Games.