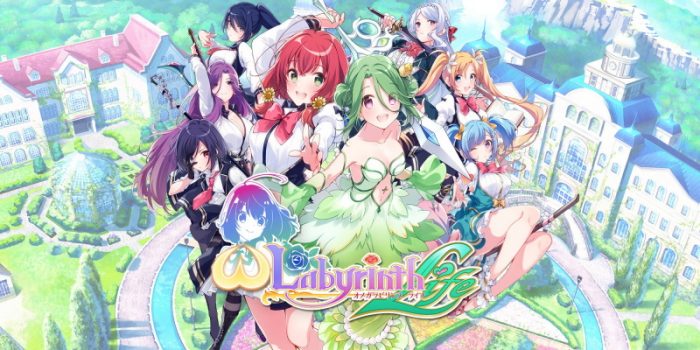 In Omega Labyrinth Life, your adventure will begin in Belles Fleurs Academy. Youâ€™re in control of Hinata Akatsuki, the first-ever transfer student to be accepted at this institution. Youâ€™ll be welcomed with open arms, and Berune Orenji, one of the students at Belles Fleurs Academy, will even start referring to you as Hina â€“ which, as you can see, is short for Hinata â€“ as a way of showing her affection. There is nothing that could possibly go wrong at Belles Fleurs Academyâ€¦ right?

A few seconds after you start to play Omega Labyrinth Life, the game will throw you right into a tutorial dungeon. In here, you will learn about being able to do a short dash by pressing and holding the B button, and that you can attack the space in front of you by pressing the A button. Since enemies move when you move or attack, you can press the A and B buttons at the same time to basically â€œskip a turn,â€ which will make enemies move â€“ or attack if theyâ€™re near you â€“ while you recover your HP and recover from status effects. Because of this, you should use this option when youâ€™ve cleared a room of all enemies.

As you walk around a dungeon and attack enemies, your belly will grow hungrier. You will see an orange bar below your level and hit points bars, and this will display how full your belly is. There is also a handy percentage marker so that you can quickly know exactly how hungry your character is, so be sure to pay attention to this so that you can consume food and drinks as needed to keep it as full as possible. If at any point, your belly is completely empty, you will start to lose some hit points (HP) slowly, so always have something to eat! 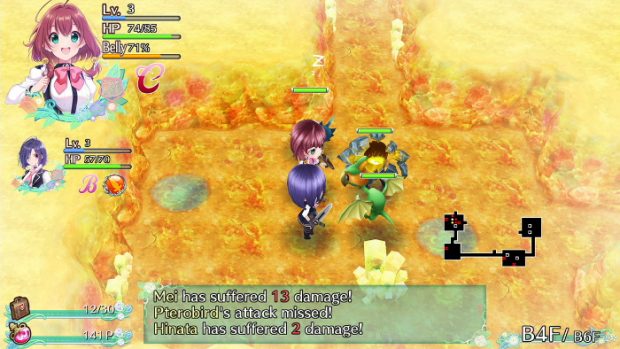 Along with food items, as you explore each dungeon, you will also find various equipment and other items, just lying on the floor. Walk over them, and they will be collected, so that you can make good use of them. You start the game with nothing on you, so when you pick up a sword and shield during the tutorial dungeon, they will make a big difference in your characterâ€™s attack and defense stats once youâ€™ve equipped them. While before your attacks with your bare hands dealt some damage to enemies, having a sword in your hand will make it possible to defeat some enemies in one swing

Something else youâ€™ll learn about the game is how a characterâ€™s overall strength is related to that characterâ€™s breast size. Yes, you read that right: their breast size. It is then that you start to notice how some of the gameâ€™s elements take it into fan service territory. It turns out that as you defeat enemies, you release some Omega Power – mystical energy. Characterâ€™s breasts absorb this power, hence growing in size. This is only valid for the dungeon youâ€™re currently exploring, so once youâ€™ve exited the location, your characterâ€™s breast will return to normal, forcing you to obtain more Omega Power at the next dungeon to boost all your stats while recovering your health at â€œlevel up.â€

The dungeons are not the only gameplay sections for the game, as you will also get to walk around Belles Fleurs Academy. For these sections, you will investigate as you visit and interact with the people that with a speech bubble â€“ especially those that display an exclamation mark – you can do this by pressing the A button. By pressing the R button, you will get to expand the camera view over the institution so that you can easily spot who you can talk to or where you should visit. There are different locations to explore, but these will be opened up for you to make use of what they offer – as is the case of the Item Shop, as you progress through the game. 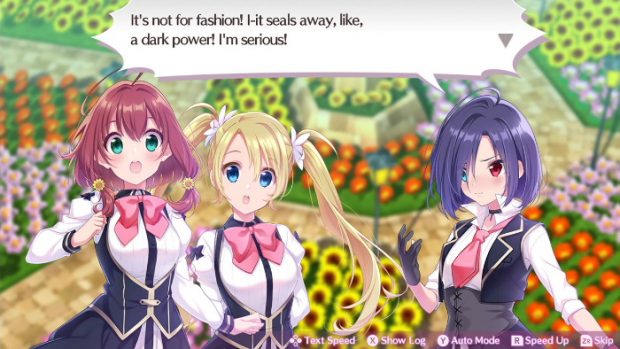 The Academyâ€™s Grand Garden, which had never had a single issue, ends up being covered by a bizarre black mist that makes every single flower wither away and die. Some of the girls start to panic and blame Hinata for this since there had been no problems until she transferred to the school. The Holy Blossom, the most important flower of them all, has also gone missing, and Hinata volunteers to go into the new garden dungeon to explore and try and find it. Berune will join her as well, and the two set out on a new quest.

Now that you have a partner, you will need to issue some commands so that she can act accordingly during the dungeon. You can have your partner follow you around, support your main character without attacking, have her not use any skills, have her follow right behind you without joining in on combat â€“ useful for when one of your partners has been injured and does not have many hit points -, or just remain in her position and not move at all. The first couple of dungeons donâ€™t have many enemies for you to worry about, but after the starting sections, you will need to make good use of the partner menu if you want to stay alive. You can also complete missions for each dungeon you visit, and completing all missions will reward you with an item.

And now, letâ€™s talk about a pair of gameplay mechanics that are certainly going to rub some people the wrong way. Youâ€™ll find Nem, a fairy, inside of the garden dungeon, and she will help you understand a new gameplay mechanic: Size Up. You can give them Omega Power to help them take shape. You know, the same Omega Power that is being stored in your charactersâ€™ breasts. To transfer Omega Power to Ambiguity Crystals, a character will need to place it between her breasts and have players interact with them to grind the item they hold between them. 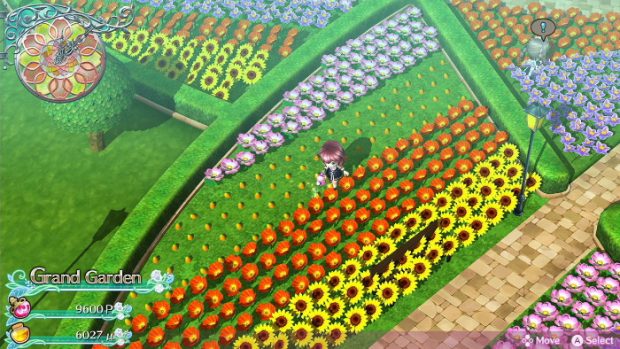 You will need to touch the symbols on the screen to try and feel a characterâ€™s breasts so that they can make the unappraised item change shape. You can do this either with the left analog stick for the left breast and the right analog stick for the right one, or you can use the Nintendo Switchâ€™s touchscreen when playing in Portable or Tabletop mode. The more you do this, the easier it will be for the unappraised item to grow, until you can finally complete the mini-game and get a new item for your inventory.

Next is a gameplay mechanic tied to how you tend to the flower bed when at Belles Fleurs Academy. Once youâ€™ve planted new seeds, they will bloom in a set amount of time, but you can make them grow stronger by watering them. Makes a lot of sense, right? The flowers that are watered will be better at proving you with Nectar. Nectar is used to augment by Blooming, and this is done by touching a characterâ€™s hearts to make a Rosette mark pop up on a girlâ€™s body so that you can continue to hit the hearts to make that character feel better and better. This will start to change that character into a more fan service-y and relaxed look. Once Honey Spots pop up, youâ€™ll be able to make that girl very happy, and will thus sweat a lot. The sweat, it seems, can be used in the garden to water the seeds to become even stronger flowers.

Augmenting your character by blooming will reward you with new skills that you can use in the dungeon to gain the upper hand. For example, if you do things right, Hinata will gain her first skill after the first Blooming session: Blossom Flare. What this does is deal damage to enemies in the eight surrounding squares, with double damage dealt when Hinata is at 50% or less HP. The more Nectar you harvest from the flowers in the Grand Garden, the more you can try to augment a character. This is another one of the gameplay mechanics that is not going to be to everyoneâ€™s liking, so your mileage will vary. You can also skip the mini-game and have the game assign the augmentation increase. 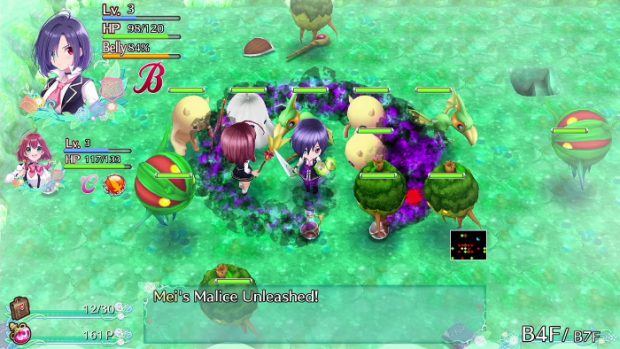 Since this is a dungeon crawler roguelike RPG, you can review a lot of different stats and things under the Gallery section, which you can access from the menu you open with the X button. In here, you can review the profile for all characters, learning more about their story, their personality, and their drive. There is also an Album section where you can check for how long youâ€™ve played the game, how many times youâ€™ve played it, the max level youâ€™ve reached in a dungeon, the total Omega Power youâ€™ve obtained, how many enemies youâ€™ve defeated, the floors and dungeons youâ€™ve cleared, how many items youâ€™ve collected, and more. 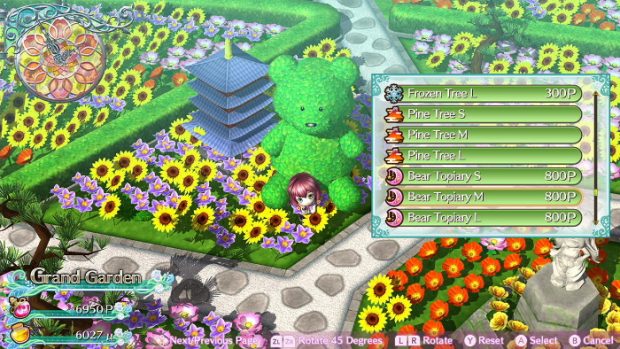 Thereâ€™s also an extensive Codex where you can check out the weapons, shields, long-range items, tomes, potions, and food items youâ€™ve collected to review some info as well as their rarity and stats, the monsters youâ€™ve battled in dungeons â€“ as well as a percentage in the upper right corner to signal how close you are to completing the list -, a list of the items youâ€™ve obtained that you can place in the Grand Garden for decoration, or information on all the flowers added to the garden, to name some examples. 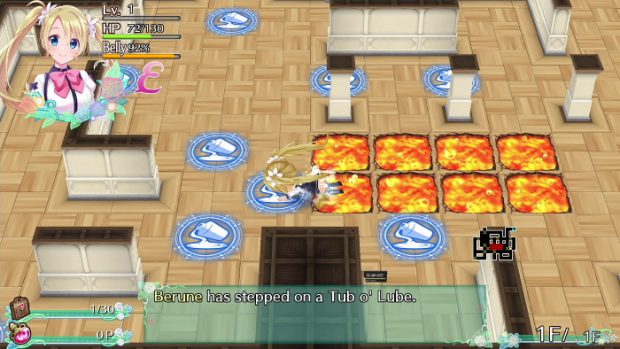 Omega Labyrinth Life is a fun dungeon crawler roguelike RPG on Nintendo Switch with a good difficulty curve that will ease you into things as you explore more and more dungeons. Thereâ€™s a ton of weapons, equipment, and items to collect, many to appraise, missions to finish in dungeons, some fun side-quests to complete at the Belles Fleurs Academy, a large garden to tend to, and a big adventure that will keep you busy for dozens of hours. The fan service heavy mini-games are not going to be everyoneâ€™s cup of tea, but since you can skip them and have the game set the bonuses on its own, you could play the game without having to take on them.

Disclaimer
This Omega Labyrinth Life is based on a Nintendo Switch copy provided by D3 Publisher.