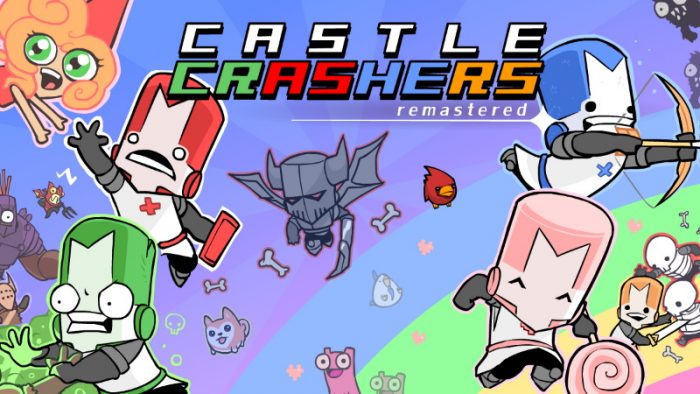 2D beat â€˜em up Castle Crashers was originally released way back in 2008 on the Xbox 360 as part of the Xbox Live Arcade program. Two years later, that version finally landed on the PlayStation 3. An improved and revamped version called Castle Crashers Remastered was later launched on the Xbox One back in 2015, featuring better hi-res graphics, a framerate set at 60 fps, and other bells and whistles. Itâ€™s now 2019, and itâ€™s finally time for the game to shine on the Nintendo Switch. As expected, along with everything Iâ€™ve mentioned, the game can also be played at home or on the go thanks to the hybrid nature of the Nintendo Switch, or played on the go if youâ€™re one of the owners of the recently released Nintendo Switch Lite. 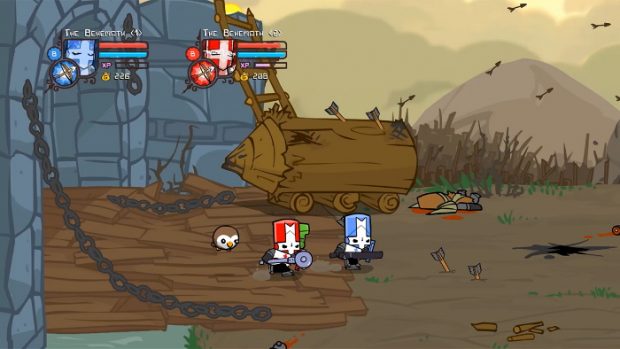 Castle Crashers is a side-scrolling beat â€˜em up that pays homage to the old-school classics â€“ your Final Fights, Streets of Rage, and others â€“ while adding some RPG elements into the mix, presented in a colorful and bright package. Your journey begins â€“ either on your own, with some local friends, or by joining players from around the world thank to its online multiplayer component â€“ when an evil wizard decides now would be a good time to sweep in to steal the powerful and comically large magical gem that sits on top of the Kingâ€™s throne while, at the same time, figuring it would be a solid idea to also kidnap the Kingâ€™s four daughters. 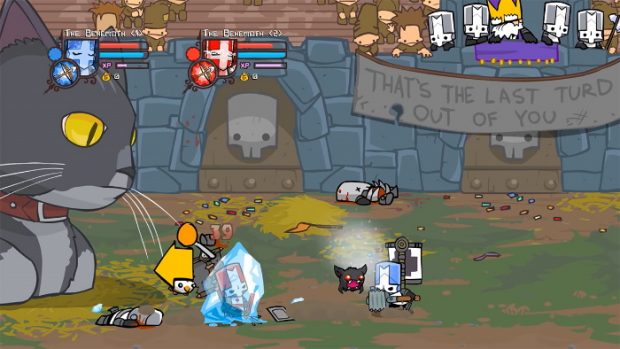 Controls are easy to get the hang of, as it should be for a beat â€˜em up. Youâ€™ll move your character around with the left analog stick or the D-Pad, attacking either with the Y or X buttons to launch your weak and strong attacks, respectively. You can jump with the B button, which is useful for when you want to escape from the madness for a bit. To block incoming attacks, use the ZL button. If you press and hold down the ZR button youâ€™ll be able to activate your magic, which can heal you unleash powerful skills when combined with other buttons, such as a magic missile by pressing the A button, or a magic jumping â€“ giant fist included â€“ by pressing the B button. Alternate between the items youâ€™ve collected by pressing the L and R buttons and use them with the A button. 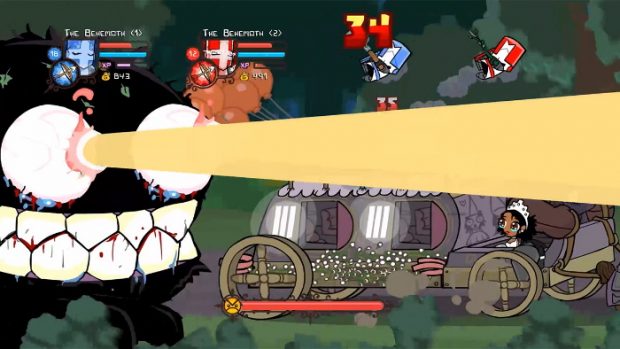 Alternating between the two attack buttons at a steady pace will allow you to unleash some solid combos that will help with crowd control when thereâ€™s more than one enemy to take care. Press the Y button three times in a row, and youâ€™ll deal a fast attack combo. Press the Y button followed by up by the X button, and youâ€™ll do an uppercut that will launch your opponent in the air, allowing you to jump and carry on with your attacks while airborne. Want to do more combos? Then youâ€™ll need to level up your character!

Every enemy you defeat will reward you with some experience points that will be added to your pink experience bar. Once youâ€™ve gained enough to fill up the bar, you will gain a level. As you level up you will receive skill points, which you can drop into one of four attributes: strength (how much damage you deal), defense (how good youâ€™re at taking a punch or ten), magic (unlocking new magical abilities and lowering the recharge time for them), and agility (an attribute represented by a bunny, which probably means you can be cuddly and nimble, right?). 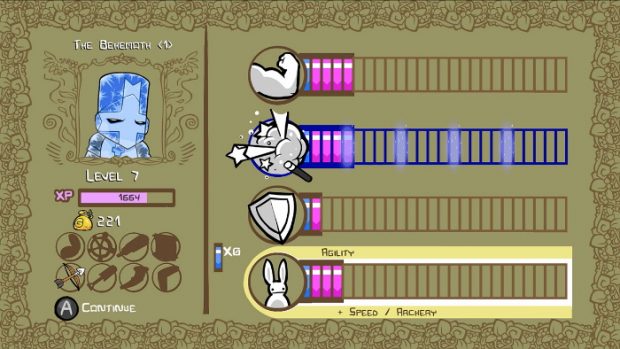 Beating enemies, defeating larger than life bosses, and opening any treasure chest within your reach will allow you to obtain valuable gold pieces that you can spend at the stores you visit to purchase items such as weapons to boost your stats (as long as you have reached the level required to equip it), potions to heal your wounds, animal orbs that unlock a floating animal that will accompany you on this adventure, providing you with bonuses and enhancements â€“ which you can select at the animal ark which hosts all the animal orbs youâ€™ve obtained -, and more.

Castle Crashers Remastered features online leaderboards for you to compare your performance with players from around the world in the main Castle Crashers adventure, in the Arena – in which you fight against wave after wave of enemies -, or in the Back Off Barbarian mini-game, in which your character is presented as a piece on a board-game style grid where youâ€™ll try to keep other players from stomping on you while you try to stomp on them. Can you make it to the top of each list? 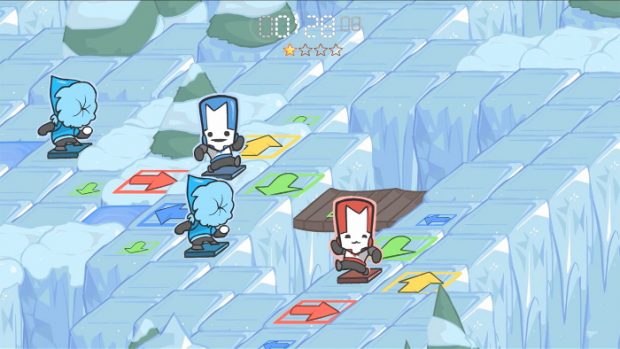 On top of the leaderboards, this one offers an in-game achievements system which matches the trophies youâ€™ll find in the PlayStation 4 version. These include completing objectives such as completing the game with any character, defeating a boss by playing with one of its minions â€“ from the extra characters you can unlock in the game -, flinging a knight with maximum power from a catapult, collecting all animal orbs, winning 40 online area matches, surviving until the 2:30 minutes mark in Back Off Barbarian, and more. 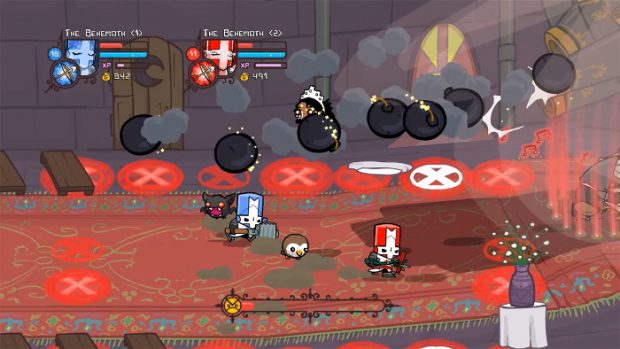 Castle Crashers Remastered is a fun and hectic beat â€˜em up that feels right at home on Nintendo Switch. It has a ton of content to offer which you can enjoy offline on your own, offline with friends for some fun local co-op, or online as you enlist the help of players from around the world. Itâ€™s available for a budget $14.99 and is a must-have for beat â€˜em up fans.

Disclaimer
This Castle Crashers Remastered review is based on a Nintendo Switch copy provided by The Behemot.

A great beat 'em up game, back for a new round 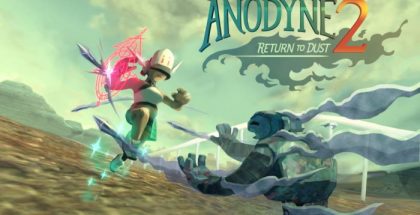 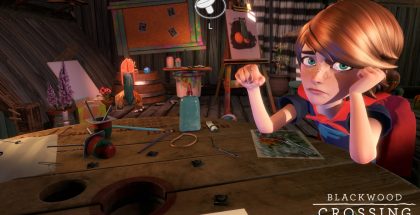