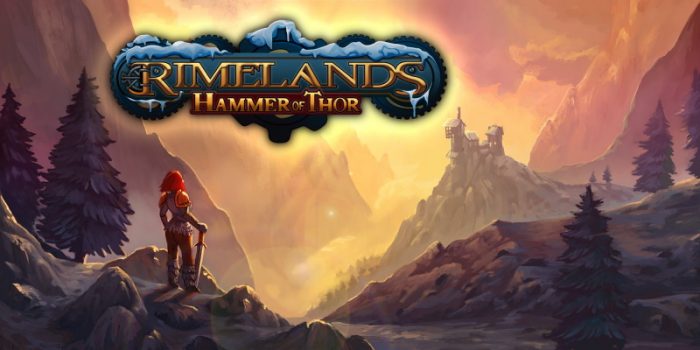 In Rimelands: Hammer of Thor, you take on the role of treasure hunter Rose Cristo in a world that mixes fantasy and technology. Rose will be using weapons, like the ever trusty and classic sword, as well as magical spells to take things to the next level. Rose is looking for the Jottun bracers, a treasure that might help to shed some light on what happened to Rose’s family. She quickly realizes that there’s more at play, and that there’s a much bigger threat looming on the horizon.

The game is turn-based, and that means youâ€™ll need to make the most of your turn to perform the right actions necessary to succeed. You can move, attack, use a skill, or rest, as well as open up doors or treasure chests, read books or interact with other characters, drink potions to aid you, or even change your equipment to make the most of whichever situation youâ€™ll be facing. The interesting twist is that the game shares some key elements with old-school tabletop roleplaying games. 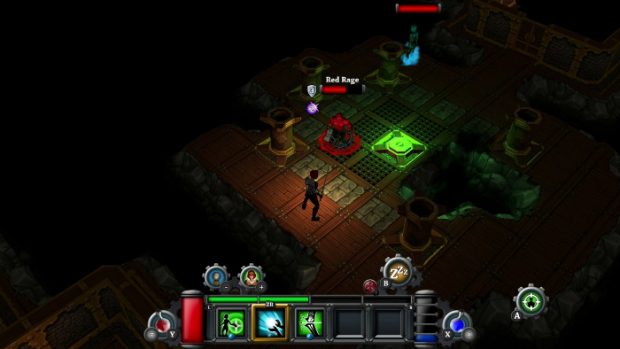 In Rimelands: Hammer of Thor, combat is centered on die rolls. The battle system is tied to a bit of a random number generator (RNG) element since it uses the roll of the dice to determine the outcome of battles. For each attack, there are two rolls, an attack roll, and a defense roll. The numbers for the die will depend on your overall stats, and as you attack, you will need to get in as many hits as possible, depending on the number of skulls you get. On the other hand, defense rolls are for shields, and these rolls will be to lower the damage youâ€™re about to receive. Your melee ranged, and magic stats will be used for your rolls.

Depending on your equipment and your skill, die rolls for attack or defense will be a bit different, and the final outcome of the battle will certainly be affected depending on your equipment loadout. Say, for example, that your character has a melee stat of 3 and a sword with an attack of +1 as a bonus. In this scenario, youâ€™d end up rolling four dice for your attack roll and four dice for a defense roll, based on the 3 of your melee stat for both, but with a bonus of +1 to your attack thanks to the mighty sword. 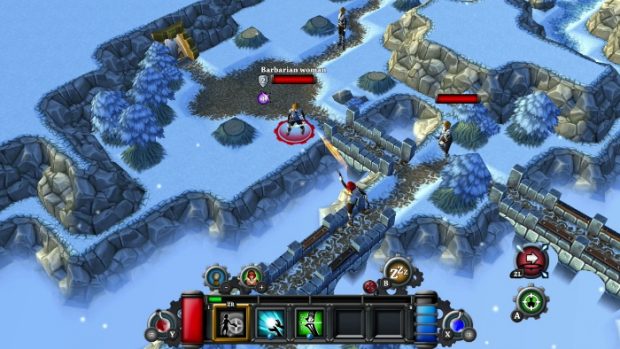 Since rolling the dice is pretty much a gamble, you have access to a re-roll. There is one re-roll available per turn, which you can use for your attack or your defense roll, so youâ€™ll need to decide if going all-in on your attack roll to try deal damage from which your enemy canâ€™t recover from is worth more than having a re-roll ready to go in case the dice do not favor your overall defense initiative. Re-rolls will use up mana, which is a very valuable resource in Rimelands. You can have up to five mana points – and no, you canâ€™t increase that total. What you can do is recover mana points by using mana potions or by resting for a return. The good news is that outside of combat, your mana will recover at a steady pace.

Your stats will also play a role in battle, with the most important of all being your health. Youâ€™ll notice a red bar on the screen, and this represents your total hit points â€“ how much damage you can sustain before you are defeated. To stay alive, you will need to make good use of healing potions to recover from any hits you might have received. You will also gain a boost to your health depending on the talents youâ€™ve unlocked in the corresponding tree, so be sure to keep an eye on your health as you battle stronger enemies to see if you need to give it an extra push towards a higher value. As is the case for mana, your health will also recover when youâ€™re not in combat. 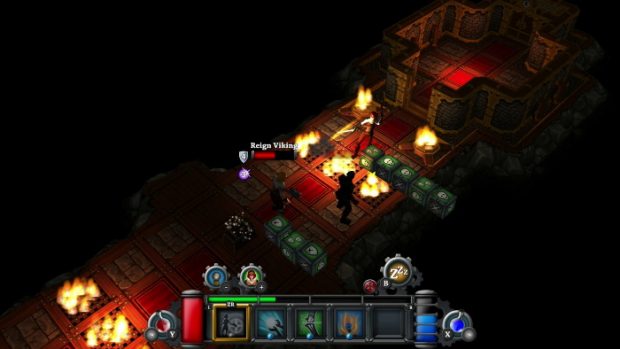 This being a turn-based RPG means that you can obtain experience points from the many enemies youâ€™ll defeat, as well as extra experience points from the quests you complete. Obtain enough experience points, and Rose will level up. Upon leveling up, youâ€™ll be able to select a path to take on the skill tree, unlocking some new talents for your arsenal. You can go down all three paths if you want to diversify, but being a jack of all trades is something that only experience players should try. The three paths are Barbarian, which focuses on melee attacks and a boost to your defense, Assassin, which specializes in ranged attacks, and Shaman, which will focus on magical attacks. 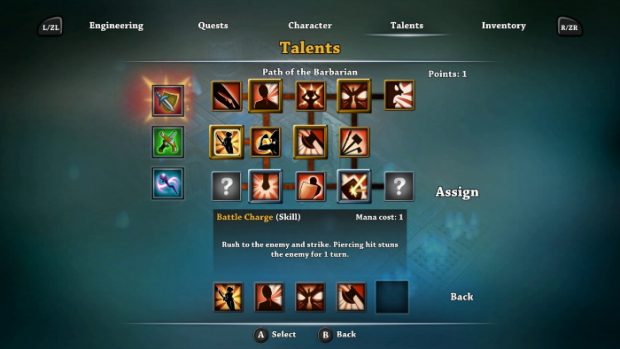 The talents youâ€™ll unlock are split into skills, passive talents, and boost to your character. Skills are active talents youâ€™ll be able to use in battle in exchange for some mana. Passive talents will always be active and will provide some good bonuses for Rose. Boosts, as the name suggests, will improve the power and potential of other talents, so you might want to keep an eye on these so that you can make the most of the other talents youâ€™ve unlocked. You can have up to five talents on your skill bar and can change them around at any time.

As you quest around each area, you will end up obtaining different items and pieces of equipment that will fall into one of four possible categories: Melee, Armor, Ranged, and Accessory. As for your equipment, you can only have an item of each category active in the corresponding slot, which is why itâ€™s a must that you change around your equipment as needed for each battle you take on. Unlike most games that offer the chance of changing your equipment in battle, doing so in Rimelands does not end your turn, so youâ€™re definitely encouraged â€“ and expected â€“ to do this to be able to survive. Items will provide boosts to your stats, aiding in how attack and defense rolls can play out. 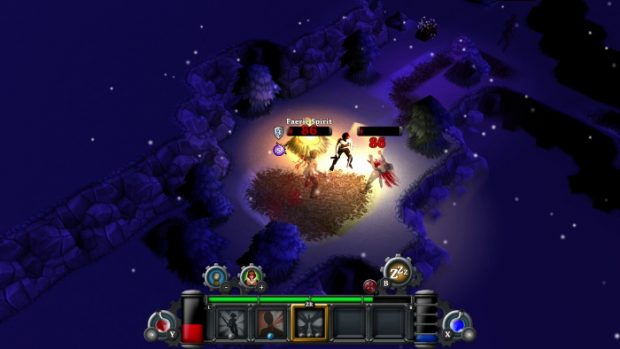 You can also loot resources during your adventure, and you can also dismantle items to obtain different types of resources. As long as you have the blueprint for an item, as well as the resources required for the process, you can engineer new items that will even include a special power to aid you on your journey. Just go into the Engineering tab on the character menu, and youâ€™ll be able to build some new items. Once you have selected the item you want to build, just press the A button, and youâ€™ll be good to go. 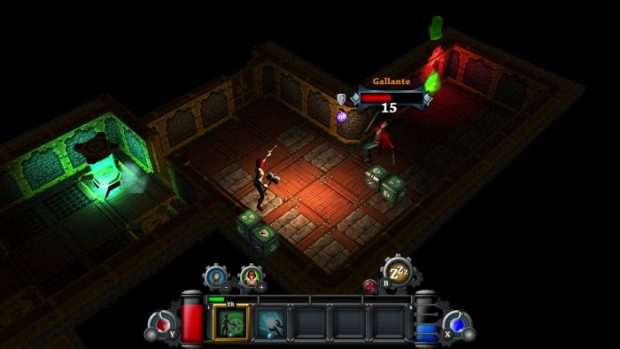 I had fun during my time with Rimelands: Hammer of Thor. Itâ€™s not going to win any awards for its looks, but itâ€™s certainly an entertaining and offers an interesting twist on turn-based battles thanks to the use of dice and how you can manipulate rolls to your advantage for attacking as well as defending. Rimelands: Hammer of Thor is available on Nintendo Switch for only $9.99.

Disclaimer
This Rimelands: Hammer of Thor review is based on a Nintendo Switch copy provided by QubicGames.

[Beyond PlayStation] The Bradwell Conspiracy Review