Game ReviewsThrough the Darkest of Times
No Comments

Through the Darkest of Times from HandyGames takes place during 1933 in Berlin, Germany. You will be the leader of a small resistance group in a strategy game setting. Your goal? To try and survive in a time when the 3rd Reich had everything under its oppressive controlâ€¦ all while trying to bring down the regime. Because of this, your life will always be in danger, because the Geheime Staatspolizei â€“ the Secret State Police, which you might know as the Gestapo â€“ is actively working towards squashing all opposition.

Sure, your group wonâ€™t be able to bring down the 3rd Reich on its own, but you can certainly do whatever you can to try and make a change here and there, right? Save one life today, and maybe in a few decades, that person could be crucial towards completing a discovery that can change the way humanity lives. You might send some of your operatives to gather information on some Nazi operations so that you can try and sabotage them, or perhaps they can write messages of protests on the walls to try and rally others to your cause. 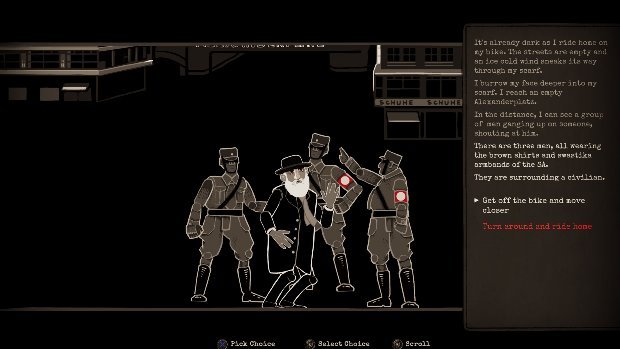 Your options for playing through the game are Resistance Mode and Story Mode. Resistance Mode is what you would call the hard difficulty setting in other games since you will need to watch your every step because the police â€“ and the Gestapo â€“ are going to be on high alert. There are no save games, so every decision you make will have an impact, and the members of your group are not a happy bunch, so theyâ€™re always one step away from leaving the movement. Story Mode, on the other hand, allows you to explore the gameâ€™s story at a steady pace, with an overall more forgiving challenge. On top of this, every turn is saved, so that you can slowly but surely make some progress.

The next step will be to select the character youâ€™ll be playing as. The game will give you a randomly generated character to get you started, but you can change this so that you can have a character that feels right for you. By pressing the Square button, you can roll a new character. You canâ€™t select its gender on your own, so youâ€™ll have to roll to get a male of female character first. From there, you can adjust the characterâ€™s hair, eyes, shape of face, nose, mouth, beard (for male characters), accessories, and clothes.

Thereâ€™s going to be a ton of text to read in this adventure. The dialogue choices you make will dictate the twists and turns of the story youâ€™ll experience, as will the actions you take to try and stop the new regime. Once a scene ends, youâ€™ll have to establish your plan. The city map will allow you to send your group members into a variety of missions, as well as allow you to review your items, the number of supporters in your group, as well as the overall morale of those who are now part of the resistance. 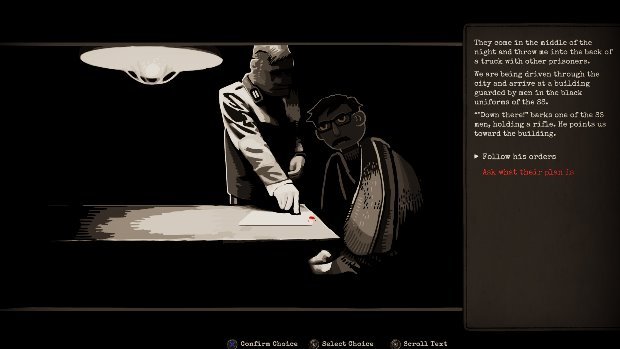 Each action that you intend to take will have some requirements to fulfill, as well as some extra information youâ€™ll need to consider. Say you want to talk to some workers to try and inform them of what is really going on. For this, youâ€™re going to need one to three members for that particular task, and must keep in mind which skills are required, as well as the risk youâ€™ll be putting the group in. Talk to the workers and succeed, and youâ€™ll add more people to your cause. If you instead decide to collect funds for your cause, you can add more money to your resources, which you can then use to add a new member to your group.

Once youâ€™ve decided on a mission youâ€™ll try to complete, youâ€™ll have to assign which members will be acting. You will need to review each memberâ€™s skills so that youâ€™re actually sending those that are more capable of getting the job done. You can also decide to add some optional items into the mix, in hopes of improving the potential outcome of the mission, or to help members escape from the mission in case something goes wrong. Going back to the aforementioned â€œtalk to some workersâ€ mission, if you send someone with a high empathy stat, things should go smoothly. 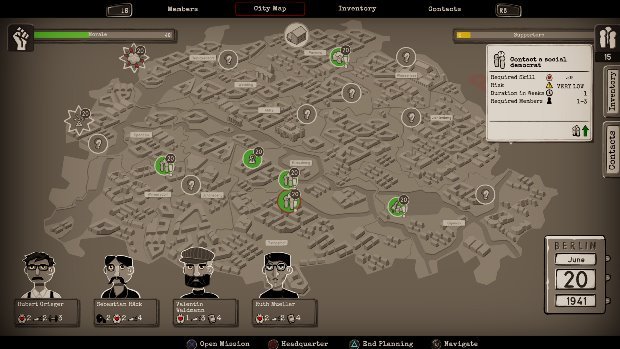 When youâ€™re done preparing for the different missions youâ€™ll take on, you can end the planning stage by pressing the Triangle button so that you can execute your plans. Youâ€™ll quickly get to learn more about the results for that weekâ€™s actions, which in my case allowed me to add five more people to support the cause, while also obtaining an extra two marks from supporters that value the work that the group was setting out to do. You will also get a more detailed view of what has happened during each mission.

Supporters are a must since theyâ€™re the backbone of the resistance. Supporters will provide your movement with much-needed funds, as well as bring forward new information, thus opening up new mission opportunities. Your groupâ€™s morale is also another important stat. Due to the overall situation and the constant stress from witnessing the cruel actions of the new regime, morale is going to be in a constant decline, so you should try to find ways of boosting it. If your morale is depleted, then your group will dissolve, and it will be game over.

Your groupâ€™s members will gain experience points based on their performance during each mission. Once someone gains enough experience points, it will level up. Leveling up is important since it willow them to improve their stats and abilities, which will, in turn, have an impact on how they perform in subsequent missions. Youâ€™ll need to take good care of the higher-ranked members of your group, because theyâ€™re always in danger of being arrested, or worse, dying during a mission that has gone terribly wrong.

As for the trophies, Through the Darkest of Times has a full trophy list with a Platinum trophy at the end of the road. There are over 20 trophies tied to progressing through the gameâ€™s four chapters, completing a variety of objectives along the way. There are also trophies for completing specific actions, such as managing to gain 20, 50, and 100, 500 supporters within the same chapter, for collecting 50, 250, and 500 Marks in donations to your cause within the same chapter, or for committing your first act of sabotage, to name some examples. 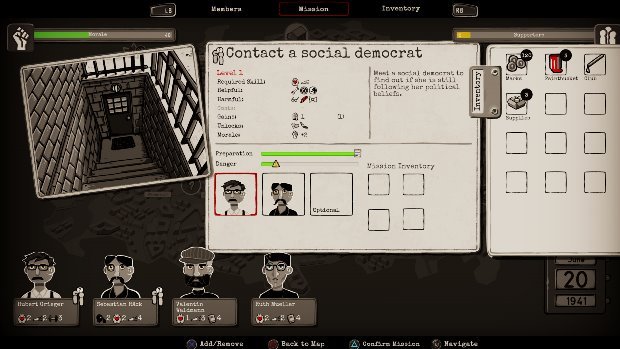 Through the Darkest of Times is a solid game that deals with a very serious topic, wrapped in an adventure game that will give you a glimpse into what people had to suffer through right after President Paul von Hinderburg appointed Adolf Hitler as chancellor of Germany back in 1933, and what followed soon after. Because of this, and the gameplay mechanics that involve a lot of planning – and a ton of reading â€“ this is one of those games that is not going to appeal to everyone. Through the Darkest of Times is out now on PlayStation 4 with a $14.99 asking price.

Disclaimer
This Through the Darkest of Times review is based on a PlayStation 4 copy provided by HandyGames.