Jet Set Knights from FobTi and Ratalaika Games is a 2D action platformer/tower defense game in which you must protect the princess at all costs. Check our Jet Set Knights review!

The king has gone away for a while, making the kingdom ripe for attack by the forces from the dark underworld. Princess Kitty and her subjects are now in danger!

As I started my time with Jet Set Knights, I noticed there were different knights available for this adventure, but I later realized this doesn’t change the core gameplay mechanics at all, so you can select the one that you like best. When you first start playing, the game might feel a bit confusing since there’s no tutorial to help you get used to things. As long as you press the Triangle button for the Help screen, you will get to learn a bit about the main controls and gameplay mechanics.

Your goal is to go from level to level as you protect the princess at the bottom of the screen by getting rid of every enemy that spawns in each wave. While doing this, you can also build reinforcements in a way similar to a tower defense game. Building a fortification or an attack tower requires some materials – either wood or iron. You start each level with a few resources, and extras will randomly spawn around the level at different intervals. Levels almost fit entirely on a single screen, giving this release a look an feel similar to the old-school arcade games from the 8-bit and 16-bit eras. 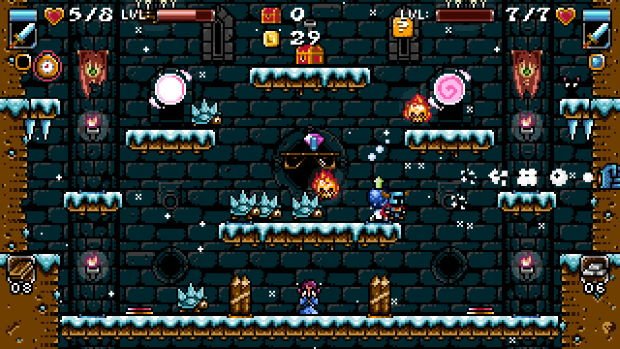 In each level, there are treasure chests that can give you access to better weapons, like arrows that will help you attack enemies from a safe distance, or a powerful lance that can be used to destroy opponents with ease. The princess also gives you random quests to complete, and when you fulfill her objects, you will get a large token for your efforts. These tokens are used in a slot machine bonus game, as well as on mini-games you unlock.

The presentation of this game has a classic look, and while some of the tracks on the soundtracks were catchy and got me fired up to take on the different monster waves, I definitively have to mention the background music for the candy land level, which has a really annoying song. A local multiplayer mode is also offered if you’re looking to play this game with a friend. 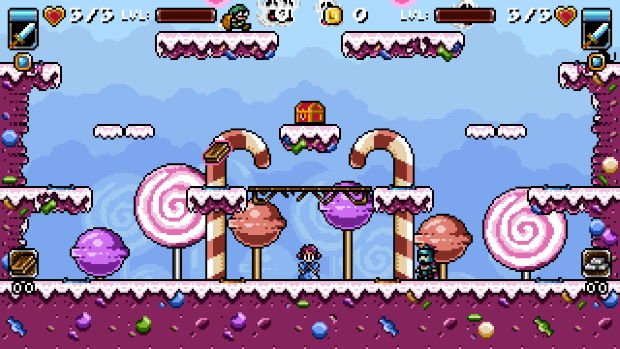 Being a Ratalaika release, a quick and easy Platinum trophy is to be expected. You are required to defeat each of the bosses the game has to offer, which is where most of your time will be spent, since this will require a bit of trial and error. There are also trophies awarded for launching a ton of arrows and defeating many regular enemies. By the time you beat the last boss on the list, you’ll probably have to play for a bit more to unlock the trophy for firing hundreds of fire arrows. Once thing I noticed is that there is once again a typo for a trophy, and this time it is for the Platinum, which is called “Platinum Knigh. 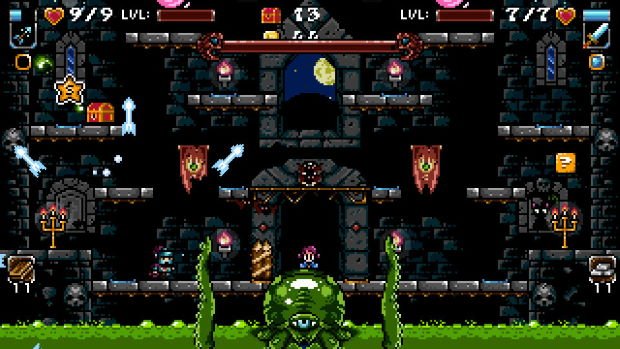 Jet Set Knights is a fun old-school style 2D action platformer with tower defense gameplay mechanics. It’s not an amazing adventure, but it’s a fun bite-sized an entertaining experience with a Platinum trophy that should take you an hour to unlock.

Here’s a Trophy guide to help you with this game, in case you need it!

Disclaimer
This Jet Set Knights review is based on a PlayStation 4 copy provided by Ratalaika Games.