Spectacle blends with addictive simplicity in One Finger Death Punch 2, a two-button brawler that bleeds style with every kung-fu inspired flurry. Surrounded and outnumbered, you’ll need to use any weapon you can get your hands on to take down waves of relentless opponents. Learn a huge variety of skills to unleash with frenetic speed and precision. Attack left or right, survive the onslaught and emerge victorious!

This game’s controls are by far as simple as they can get. Your character is in the center of the screen, and enemies come at you from either the left or right. There’s a blue zone at the left of your character and a red one at the right, which represents the reach of your attacks. Once an enemy comes into either zone, you just have to press the Square button for the left and the Circle button for the right to attack them. Each enemy has bars under them that represent the number of hits required to defeat them, as well as some arrows – eventually – for the ones that can switch sides as you attack them.

Some enemies will eventually carry weapons that will randomly be picked up by your character when you kill said enemy, making for some more bloody effects, but the controls will remain the same. The same goes for weapons that are thrown at you, which can be either blocked, caught, deflected, or dodged depending on the projectile type, again with the same controls. While that might sound incredibly simple, and it is, it all comes down to the fact that each level will have hundreds of enemies coming at you, and the better you are, the faster they will come. 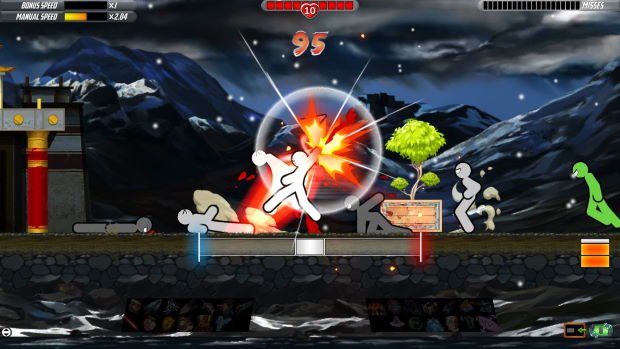 The visuals of the game are great to watch, with some nice background environments that sometimes double up with special effects, like a train crushing your foes. The character design is pretty much the same for all with some color swaps, which is great in the sense that you don’t see them around for long before they are crushed, destroyed, or decapitated. There’s a lot of blood and gore in the game’s cartoonish style, but it can be turned off if you would rather not see it as much.

When you start the game, you are treated to a 16 level tutorial that explains all the differences in enemy types, with the ones that swap their direction, the ones carrying weapons, and all the little details that you have to watch for while playing. I was already hooked after the second or third of those levels! Then I got onto the game’s first map and saw that there was a lot of content in there. There are a few hundred levels in the game to beat, so there is more than enough to do in there. And if you manage to beat them all, there’s a Survival Mode that you can go visit to fight for as long as you can survive, giving you some extremely great replay value. 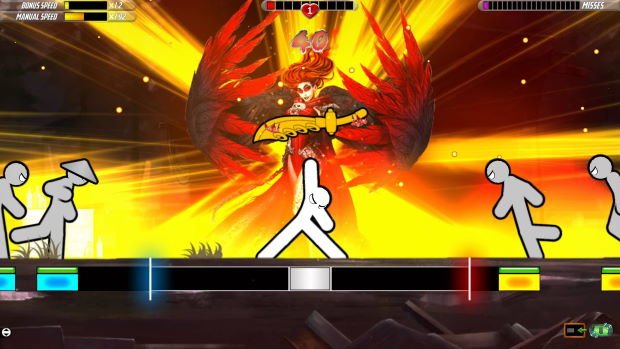 It’s worth noting, though, that it’s probably not a game you want to grind your way through. I played a lot of the game in one go, and it did feel a bit repetitive at the end of my first gaming session, mostly because, in the end, all you’re doing is pressing the same two buttons over and over again. But if played in smaller doses, it is pure fun that’s definitely worth coming back to.

As for the trophies, you can unlock them naturally as you take on each of the game’s levels since they’re mostly about playing the game. There’s a trophy for beating 150 levels, which just requires you to play for a while. There are also a few trophies for killing a certain amount of enemy types or for killing them with specific weapons, but if you play through to the end, they should all pop at some point without issues. 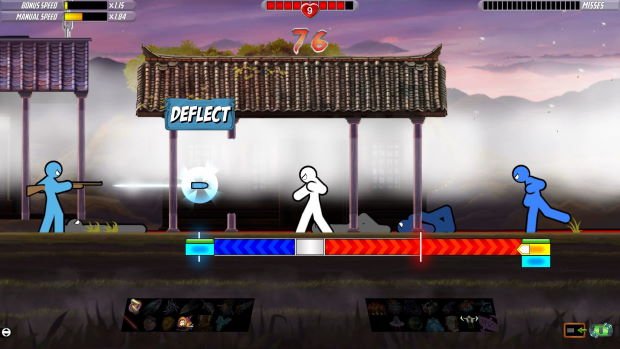 One Finger Death Punch 2 is one of those games that every fan of action, brawling, and kung fu should have. It’s simple to pick up and play, features a ton of levels and an endless Survival Mode, and, simply put, it is incredibly fun. It’s one of my best games of the year without a doubt.

Disclaimer
This One Finger Death Punch 2 review is based on a PlayStation 4 copy provided by EastAsiaSoft.