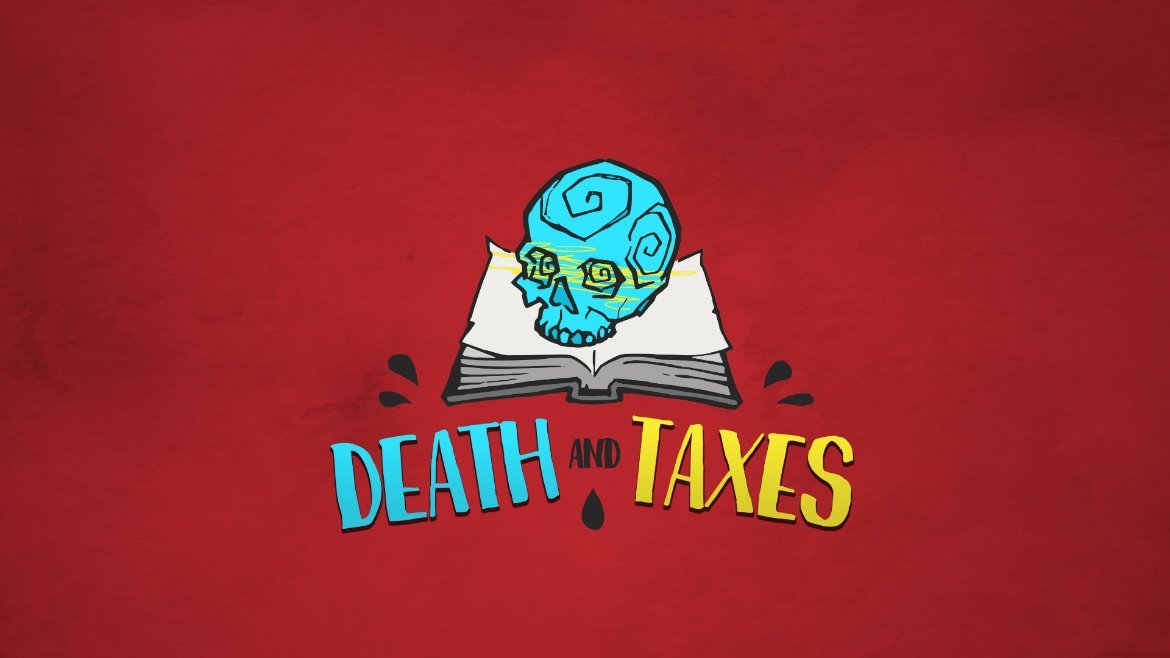 Death and Taxes from Pineapple Works and Placeholder Gameworks is a narrative-driven game in which you’ll decide people’s fate as the Grim Reaper. Learn more in our Death and Taxes review!

In Death and Taxes from Pineapple Works and Placeholder Gameworks, you’ll take the role of the Grim Reaper. As expected, your task will be to decide who lives and who dies. The twist? You will do this as an office job… behind a desk and everything! You’ll get to create your very own Grim Reaper as you decide how to shape the world around you, taking on the different branching story paths that Death and Taxes has to offer. It’s one that shares elements with games such as 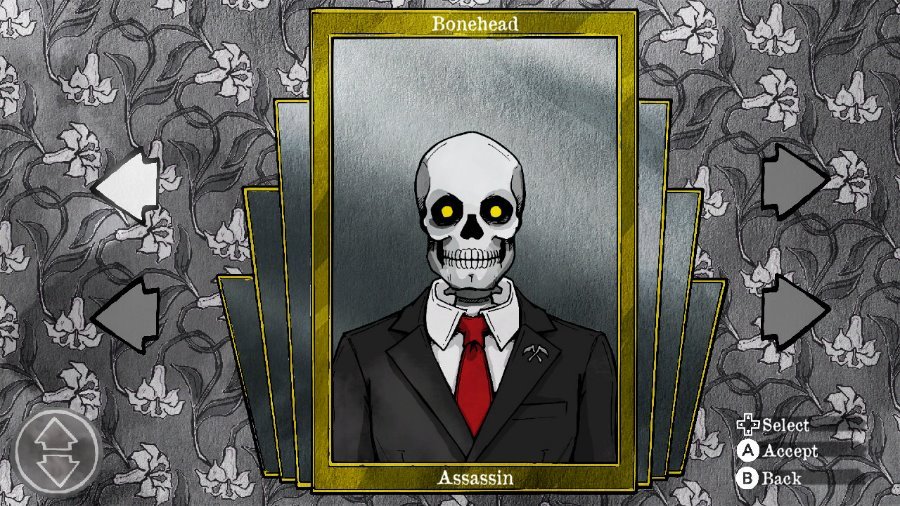 The first step in this new journey will be to select the look of your Grim Reaper. You will have different faces and suits to choose from, with more unlocking as you progress through the game – more on this in a bit. Once you’ve selected the right look for your character – using either the Nintendo Switch Joy-Cons or the console’s touchscreen when playing in Portable or Tabletop Mode, you’ll be ready to take on the first day of your new life, as you hold the future of humankind at your fingertips. 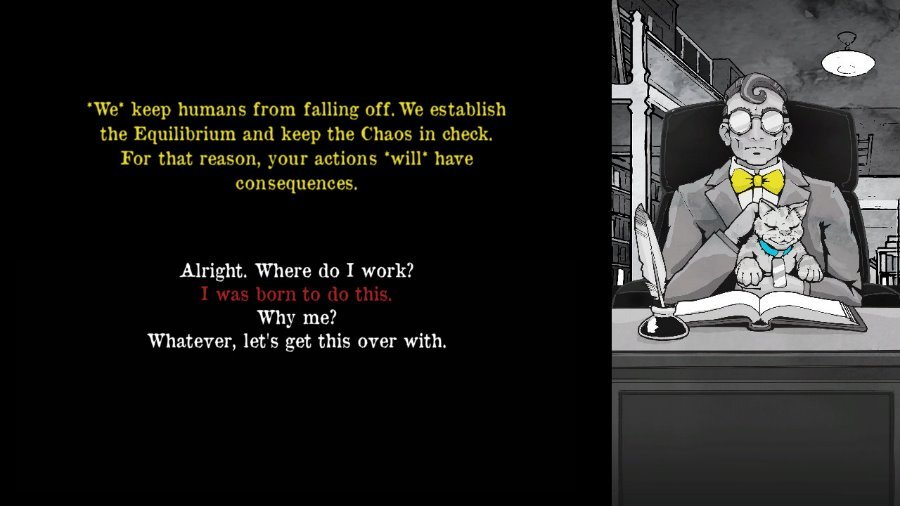 You’ll be greeted by Fate, keeper of world order, who will be your boss. You’ll be working at your new job as overseer of Cosmopolis City Subdivision #4. Choosing humans that have to die is a pretty standard gig. Humans are constantly marching towards the Great Dying but always end up teetering on the precipice, which only creates chaos. By establishing the equilibrium and keeping humans from falling off – when they don’t have to – you’ll be able to keep things rolling along at a steady pace, as they should. 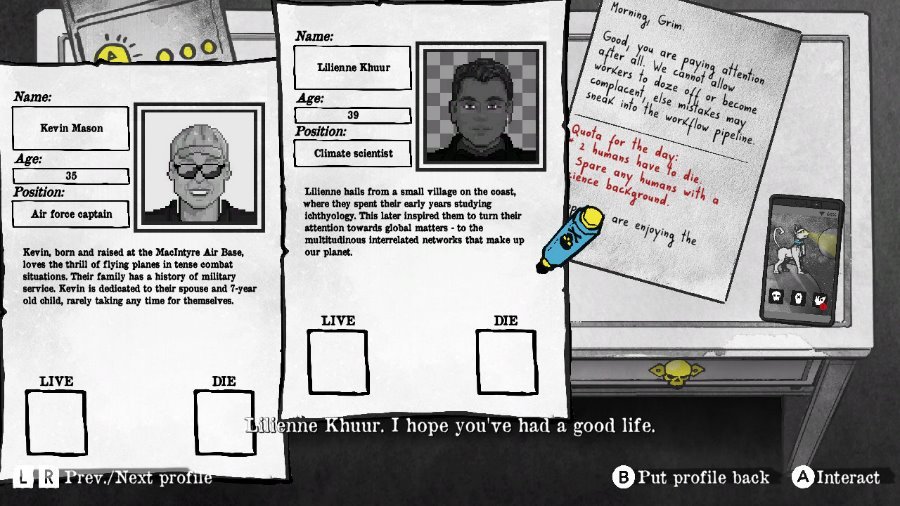 You’ll start your day by checking your instructions for the day. These could, for example, mention if there’s a quota for the day that needs to be met, which means X humans must die. These could also end up being a bit more specific, such as asking that a human with an engineering or an industrial background dies on that day. For this, you’ll need to review the profiles that end up on your desk, use the Marker of Death to select who lives and who dies, and send the documents in by way of the DEUS FAX MACHINA so that you can be done with your task for the day. You’ll also have a cellphone you can use to check the news so that you don’t end up bored to death on the job. 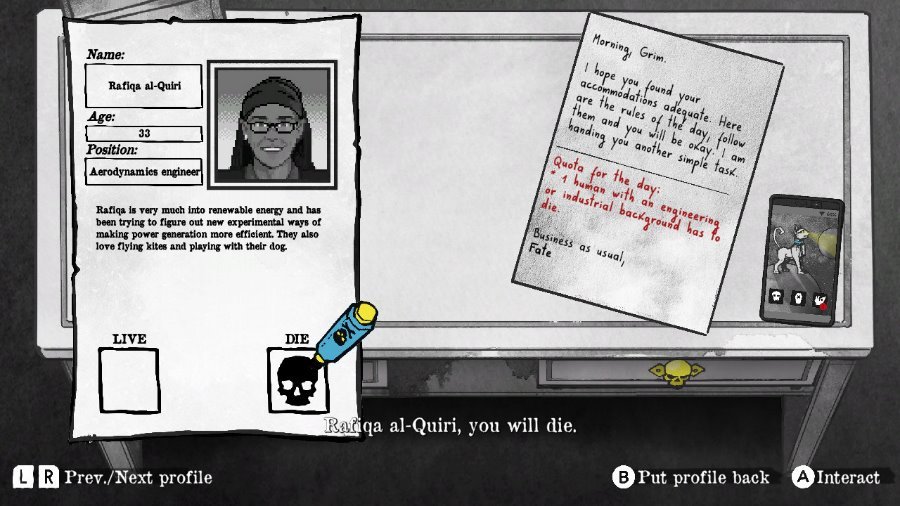 The money you earn from your hard work can be spent at Mortimer’s Plunder Emporium, where a nice variety of items – plundered by Mortimer himself – await you. There are items to decorate your space, such as Kaktos the cactus, the Threnody to Desolation, a glass globe that displays a storm that makes it hard to see the people in the middle of it all, or the Aethereal Resonator, which collates accelerated electromagnetic waves that travel through the aether, before blasting them to you. You could also purchase a piece of clothing for your character, such as a striking Grim Cape, which is always a classic, or a pair of sleek, stylish modern glasses. 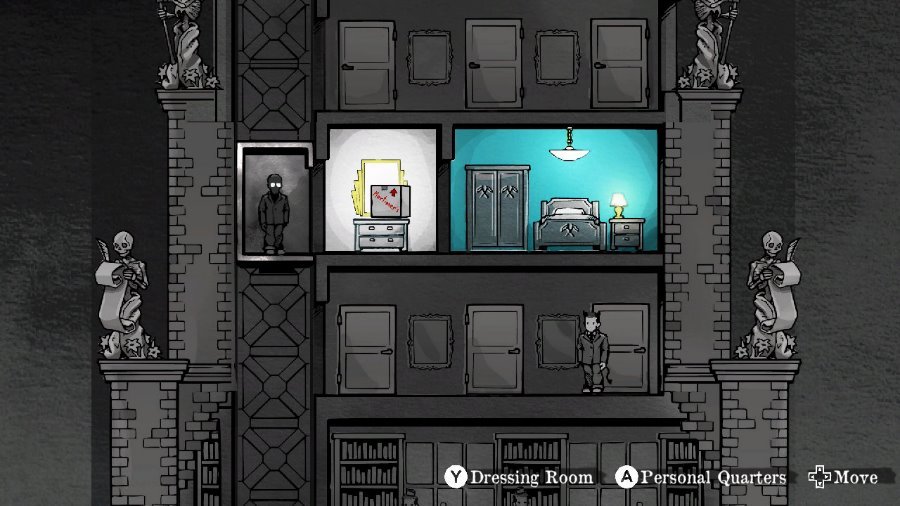 Death and Taxes is a short narrative-driven game that you should be able to complete in a couple of hours and change as you channel your best Grim Reaper, as you decide who lives and who dies with the might of your marker. The game does offer some replay value by offering different endings to unlock based on how you did during your time as the Grim Reaper, although subsequent runs might feel a bit repetitive for some. Death and Taxes is out on Nintendo Switch with a $12.99 asking price.

Disclaimer
This Death and Taxes review is based on a Nintendo Switch copy provided by Pineapple Works.

Narrative-driven game in which you're the Grim Reaper