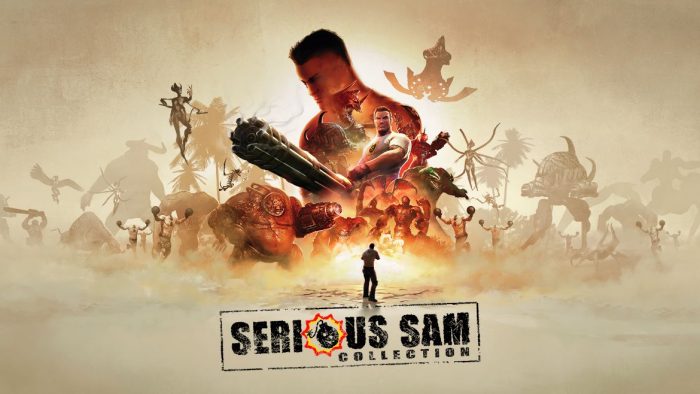 The Serious Sam Collection from Devolver Digital brings us three games in the long-running, action-packed first-person shooter series from Croteam, all wrapped together for you on the Nintendo Switch. You’ll be playing as Sam “Serious” Stone, a stereotypical buffed-up main character who is as powerful as you’d imagine a protagonist like him should be. There will be big guns, aliens, bizarre enemies with massive bodies and no heads, or bombs for hands, lots of blood and gore, and more. 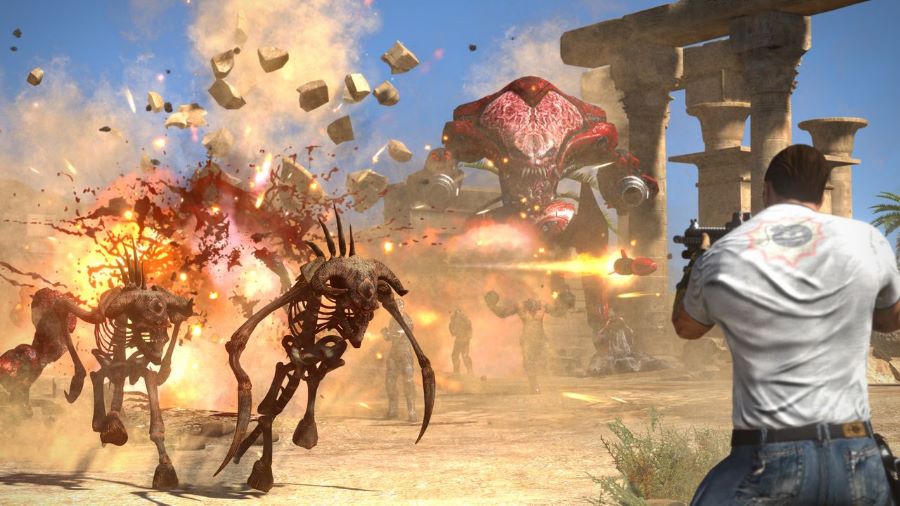 What’s included in the collection? Your purchase will get you Serious Sam HD: The First Encounter, Serious Sam HD: The Second Encounter, and Serious Sam 3: BFE, along with two expansions: The Legend of the Beast and Jewel of the Nile. What’s missing from this collection? Serious Sam 2, Serious Sam 4 – which so far has remained as a PC-only release – and any of the spin-off titles, such as Serious Sam: Next Encounter, which was released for the Nintendo Gamecube and the PlayStation 2. You can take on the Campaign for each of the included games – and DLC expansions – or go into an endless Survival Mode, playing on the multiplayer maps from each of the three games.

Your task is simple and to the point: kill all of the bad guys. You’ll be doing this with the many weapons you’ll collect as you kill anything that moves, collecting ammo for your weapons and extra powerful stuff such as grenades and bombs. Since this is a first-person shooter, you need to keep an eye on your health at all times because enemies do pack quite the punch. If you can pick up some armor, that can make it easier for you to survive for a bit longer. 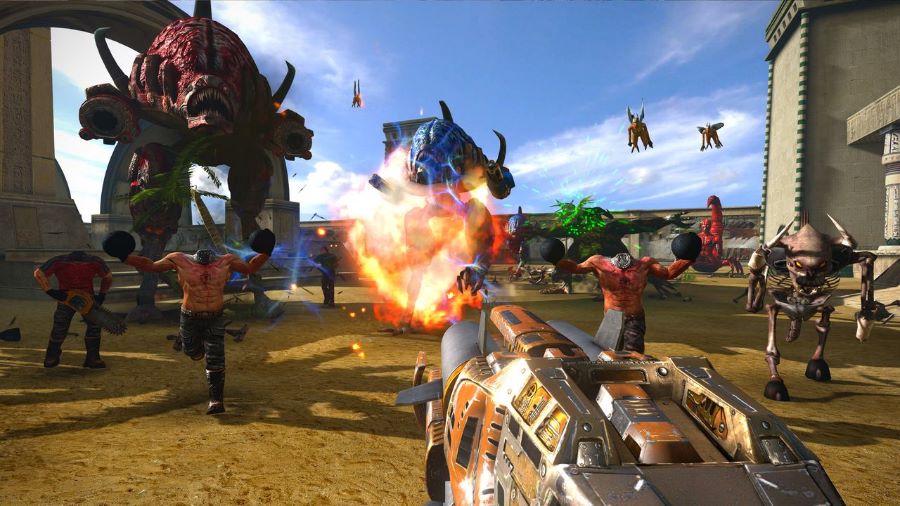 Speaking of staying alive, each of the games in this collection will offer a variety of difficulty settings so that gamers of all skill levels can have a chance to enjoy them. The higher the difficulty, the more points you can get, which can make it easier to land yourself higher on the online leaderboards, but the challenge will also be dialed up considerably, which will make it harder to live to see another day. The difficulties go from Tourist all the way up to Mental, and the higher you go, the higher the score multiplier will be. 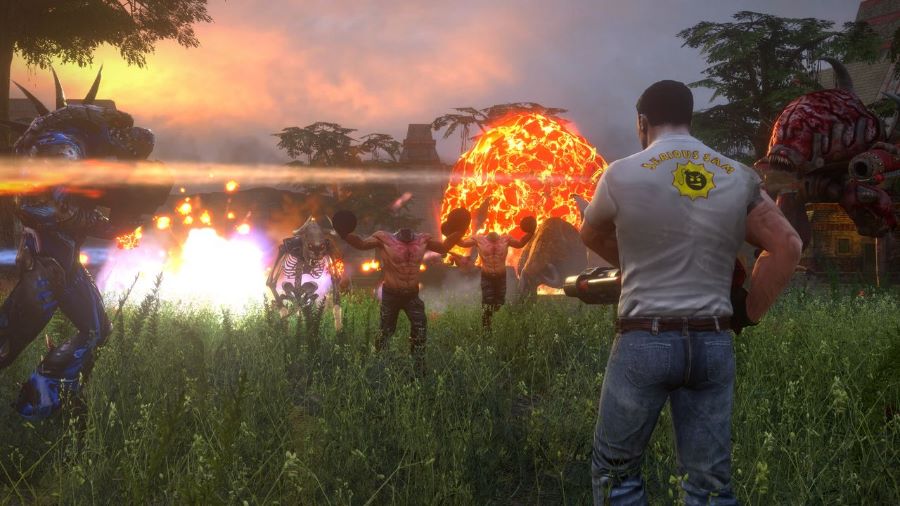 You’ll be moving around with the left analog stick, aiming with the right one as you shoot with the ZR button, reloading as needed with the Y button. The ZL button will be for your secondary fire option. You can toggle your sprint by pressing in on the left analog stick so that you can rush to safety or to avoid a pack of enemies so that you can get a better shot. Jumping will be crucial for your efforts, so press the B button every now and then to avoid attacks. You can switch between weapons with the L button to open up your weapon wheel, or you can press the R button to quickly switch to the last weapon you were using. If you want to change things up a bit, there’s also the option of playing from a third-person point of view, which can be activated by pressing down on the D-Pad. 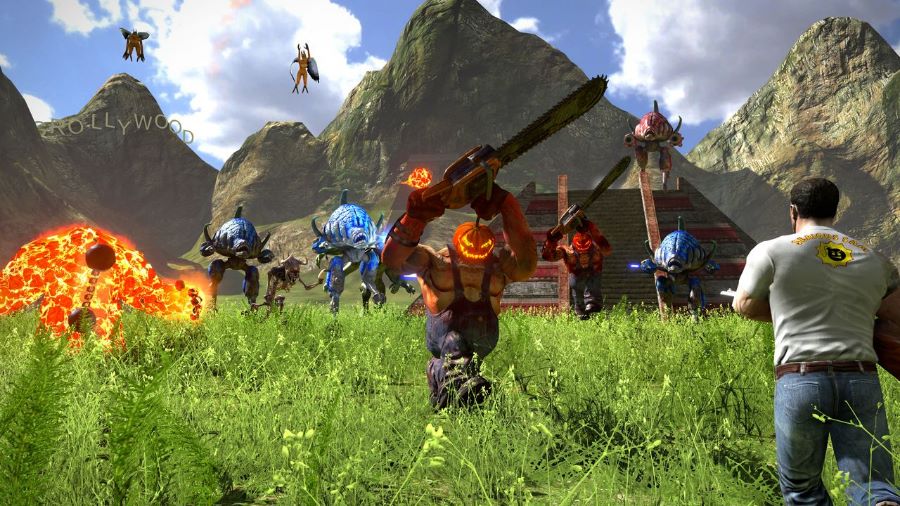 From the options menu, you’ll be able to customize your experience. You can change the color of blood and gore or remove it altogether, change your crosshair, activate subtitles, show hints, select between having the games optimized for the best graphics possible, or if you want to favor a smoother overall performance, changing the color scheme – the noir option definitely gives the game a very different feel -, as well as select from the seven different controller layout options.

The Serious Sam Collection is a good option for fans of the long-running series who want to take it for a spin on the Nintendo Switch. While the first two games in the collection run without issues, it’s easy to tell that the console has trouble with Serious Sam 3, with some serious dips in the framerate. It never got to a point that made the game unplayable, but it’s certainly noticeable – especially during cutscenes, which is certainly weird. The Serious Sam Collection is out on Nintendo Switch with a $29.99 asking price.

Disclaimer
This Serious Sam Collection review is based on a Nintendo Switch copy provided by Devolver Digital.