Game ReviewsWaves Out
No Comments 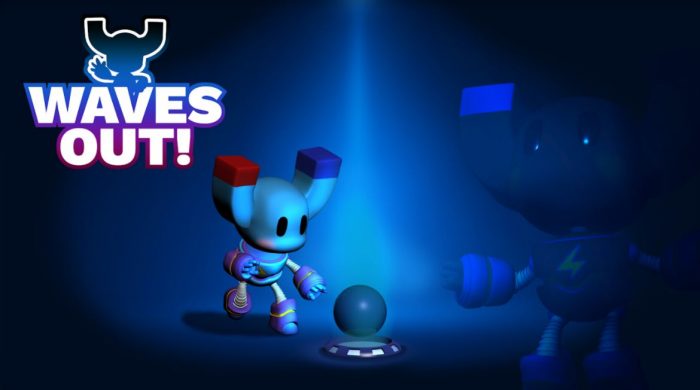 Waves Out! from Crevice and Sony Interactive Entertainment is an arcade-style game with a magnetic twist. Learn more in our Waves Out! review!

In Waves Out! from Sony Interactive Entertainment and Crevice, you’ll be taking on an arcade-style game in which the main character Magnetin will be sporting a pair of antlers in the shape of magnets. As is to be expected, this means it will have magnetic powers to attract metallic balls that will then start to glow with his energy, turning blue – or red when you’re playing against someone else in the local vs. mode. It sorta has a bit of a Hungry Hungry Hippos vibe going on for it.

You should definitely check out the tutorial for Waves Out! so that you can get the hang of things before you dive into the game. You’ll move your robot with the left analog stick, jumping and double jumping with the X button. You can attract balls by pressing the R1 button, improving your pull by picking up blue batteries. You will summon your minion with the R2 button, using it to paint balls your color. If you pick up yellow batteries, you can use the magnetic towers by using the right analog stick. You will need to bring a ball of your same color into a hole on the magnetic towers to score a point. 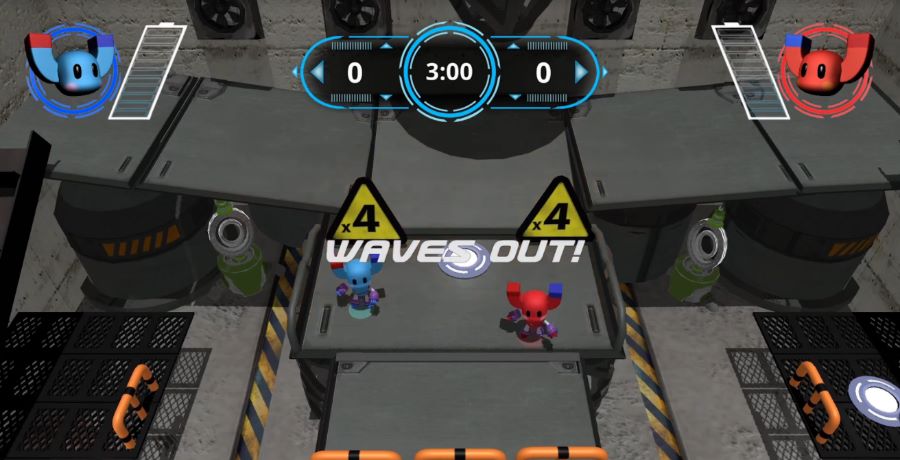 There are three modes to play in Waves Out: Single-player, 1 vs. 1, or Survival. The single-player will have you take on increasingly more difficult stages that add more elements to challenge you more and more. Take, for example, the forest stage. At first, all you need to worry about is to magnetize some balls to change them to your color as you take them to the hole on the right or up a hill to a hole that gives you twice as many points. For another variation on the level, there will be barriers you have to open with a floor switch before you can take the balls over to squares with arrows on them that will send them flying over the gap so that you can then jump over said gap to take them to the hole at the top.

1 vs. 1 will have you competing against another player locally to see who can win the most points as fast as possible, trying to change your opponent’s balls to your color so that you can steal some extra points. As for Survival, it will have you playing the available stages as you try to keep the timer going for as long as possible. Every ball that you change to your color and place inside of a hole will add one second to the timer, so you’ll have to constantly be on the move as you try to keep the timer as full as possible. Once the timer hits zero, it’s game over, and you’ll have to try again.

Based on your performance in the single-player mode, you’ll be awarded up to three stars. The more balls you manage to change to your color and send down the hole, the better your odds of getting three stars for that stage! Since stages will get harder and harder as you progress through each level type, odds are you won’t be able to get a three-star rating for all levels on your first try, but that’s not going to be a problem since you’ll be able to replay any stage as needed. 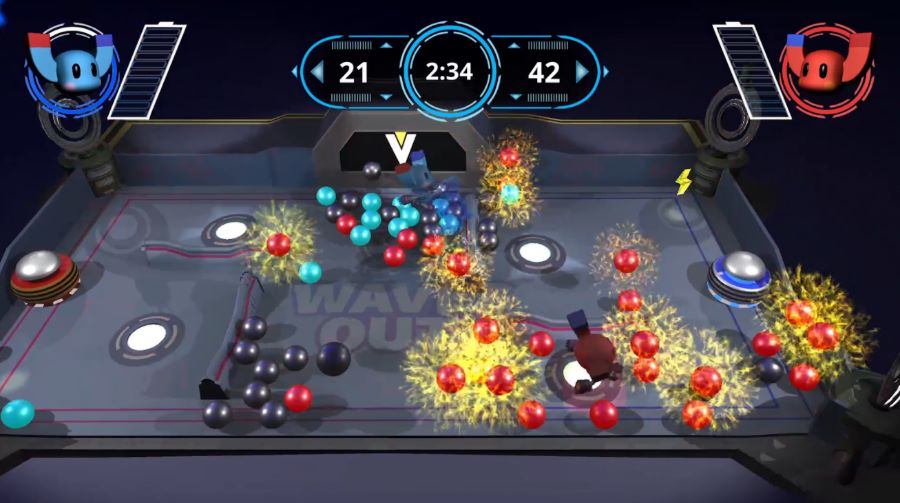 On the upper left side of the screen will be a pair of gauges that you need to pay attention to as you play. The one surrounding your character’s portrait will allow you to use your magnetic power to attract balls to change them to your color as you move them towards the hole where you can score some points. You can’t just keep the R1 button pressed non-stop since if the gauge runs out, your robot will short-circuit, ending up paralyzed for a few seconds. The other gauge will increase as you collect yellow batteries, establishing the pull of the magnetic towers.

As for the game’s trophies, this is one with a full trophy list that will reward you with a Platinum trophy once you’re done. There will be trophies tied to completing each set of stages in single-player, for getting a three-star rating on all said levels in single-player, for playing the 1 vs. 1 mode 100, 250, and 500 times, for using 100, 250, and 500 power-ups, and for earning 1,000, 2,500, and 5,000 points in total during all of the 1 vs. 1 matches you play. As you can tell from the list, this is going to be a very grindy game that will require a lot of time for you to Platinum!

Waves Out! has a good premise that, unfortunately, does not save it from becoming a repetitive experience. There’s some variety in how each of the available stages changes by adding new elements and hazards, but, in the end, it all feels the same. Add the extremely repetitive music that only features a few songs that play non-stop, as well as bugs that sometimes make your character fall through the floor or stick to a wall, and you have a game that is hard to recommend. Young kids might be able to look past all of this as you set them free on the 1 vs. 1 mode, but that’s about it. Waves Out! is available on PlayStation 4 with a $9.99 asking price.

Disclaimer
This Waves Out! review is based on a PlayStation 4 copy provided by Sony Interactive Entertainment.

An arcade-style game that misses its mark