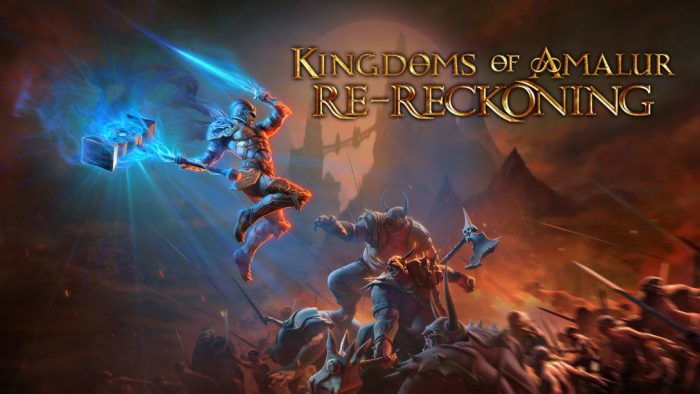 Kingdoms of Amalur: Reckoning is an ambitious action RPG that was developed by 38 Studios and Big Huge Games, published by Electronic Arts way back in 2012 on Sony’s PlayStation 3. Among the creators that worked on the game, we can find renowned author R.A. Salvatore, Spawn creator Todd McFarlane, as well as Elder Scrolls IV: Oblivion lead designer Ken Rolston, with fan-favorite Grant Kirkhope working on the musical score. The rights to the game were bought by THQ Nordic a few years ago – along with many other IP – which lead us to believe that a rerelease could certainly happen at some point. It’s now 2021, and after a PlayStation 4 release back in September, the game has now found its way to the Nintendo Switch! 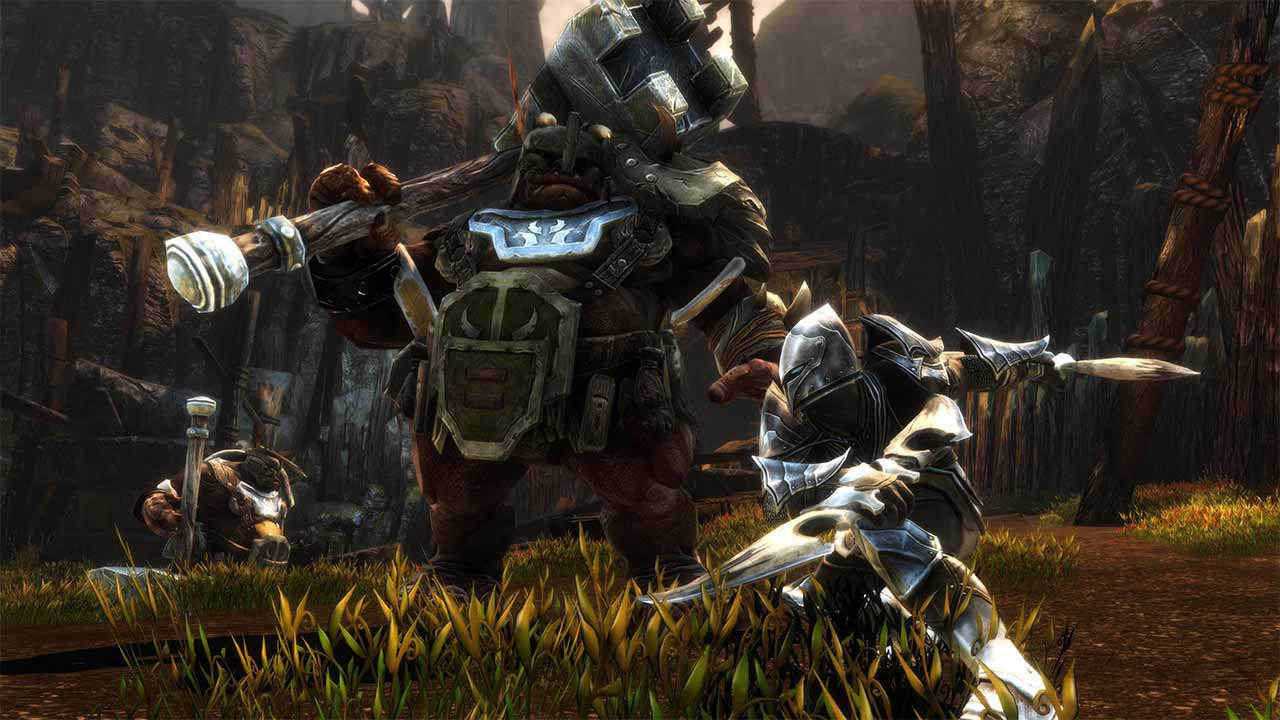 The version we’re getting on Nintendo’s console is presented as Kingdoms of Amalur: Re-Reckoning. Think of Kingdoms of Amalur: Re-Reckoning as a remixed take on the original game. It does not go as far as feeling like a full remake of the original game, nor does it set out to give this to gamers. Right from the start, the good news is that the Re-Reckoning version includes all previously released DLC rolled right into the main release. Can you tell that the game was originally released on PlayStation 3? Certainly… but so was Skyrim, and that game was also ported to the Nintendo Switch. Yes, Nintendo’s console is certainly not as powerful as, say, the PlayStation 4, so the graphical improvements when compared to that version – which the_nmac reviewed over at our sister site, are not going to make everything pop as much.

While the graphical boost presented for this game is not as big as, say, the jump for Spongebob: The Battle for Bikini Bottom – which was released on the PlayStation 2 and the Nintendo Gamecube – there’s definitely been some work done to this action RPG to give us the best version possible on Nintendo Switch. There have also been some quality-of-life improvements thrown into the mix since there are some things that someone playing a game in 2021 might expect from an action RPG.

In Kingdoms of Amalur: Re-Reckoning, the titular land has fallen into chaos. It is up to you, as the Fateless One, to use the power of the Reckoning in order to reshape the present of Amalur as you work towards building its future. You’ll wake up atop a pile of dead bodies – left for dead – with no memory at all of your past. You’ll get to customize your character’s gender, name, race, patron god, and physical look, picking from the hairstyle and color, eye color, skin tone, and other facial features.

The race you pick will have an effect on the general physical look of your character while also aiding to determine your base skills and abilities. There’s the Almain, a warlike and religious race that honors its traditions, which grants a bonus to your character’s alchemy, blacksmithing, and persuasion stats. The Varani are a race that makes the most of the high seas, making them shrewd merchants, thus boosting your lockpicking, mercantile, and detect hidden abilities. There’s also the Ljosalfar, a proud and ancient race from the northern frozen lands that lean on magic, which is why your character will have a bonus to its alchemy, sagecraft, and dispelling stats. The last race is the Dokkalfar, who are renowned students of magic and diplomacy, which is why you will get a boost to stealth, persuasion, and sagecraft. 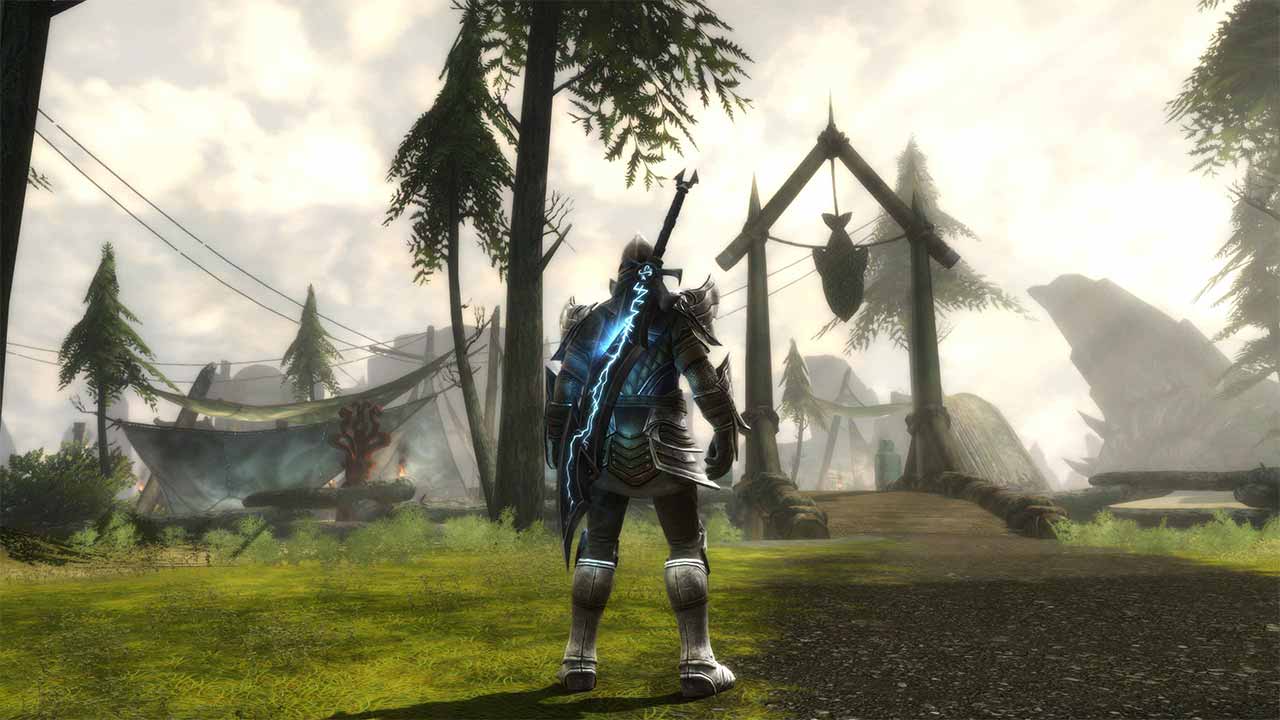 You start the game without a set Destiny, but once you speak with a Fateweaver, you’ll get to pick from three Destiny types: Brawler, Rogue, or Initiate. You will get to see the Destiny types in your adventure by the tarot cards used to represent them. Fateweavers can also be used to completely reset your character’s Skills and Abilities back to square one… that is, if you have enough gold to pay for this particular service. Every time you do this, the cost for the next reset will increase to keep gamers from exploiting it.

Going back a bit, allow me to talk about the Patron God you can select. Amalur has different gods that are worshipped by some of the races of this colorful and varied land. Depending on which Patron God you pick, your character will be blessed by said god. Blessings translate into bonuses that will help you through your journey. For example, the Varani and Dokkalfar can select Belen, God of Death, as their Patron God. Doing this will grant an 8% boost to critical hit damage, as well as a 1% extra chance to critical hit an enemy. The Ljosalfar and the Almain can pick Ynadon, God of Justice, for a 10% boost to overall health, which can really make a difference.

As you work your way through Amalur, you’ll need to keep an eye on the upper left corner of the screen since it’s there that you can check out your character’s health, fate energy, and mana. Health is represented by the red bar of the group, and it’s tied to the hit points for your character. Fate energy – the purple bar in the middle of the trio – will be obtained by using your special attacks and abilities, defeating enemies in the process. Once your Fate energy bar is full, you can go into Reckoning Mode, which will allow you to deal more damage while taking less damage, which is why you should make good use of it when battling against larger groups of enemies, or the deadly bosses in your adventure. Mana, as expected, is represented by a blue bar, and you’ll use mana for activating abilities.

As you’ve probably guessed by now, abilities are the ones you use during combat so that you can overcome even the worst survival odds – or at least die swinging. Abilities will be split into three ability trees: Might, Finesse, and Sorcery. You will see which are active abilities and which ones are passive, depending on their icon. If it’s a circular icon, then that means it’s an active ability, while a square icon means it’s a passive ability. Might abilities are melee-centric, while Finesse abilities will be best suited for someone who is aiming to boost its mana and health with each level up, favoring Rogue types. And then we have Sorcery abilities, which are magic-oriented, so you’ll have to favor mana over health to make the most of this path. 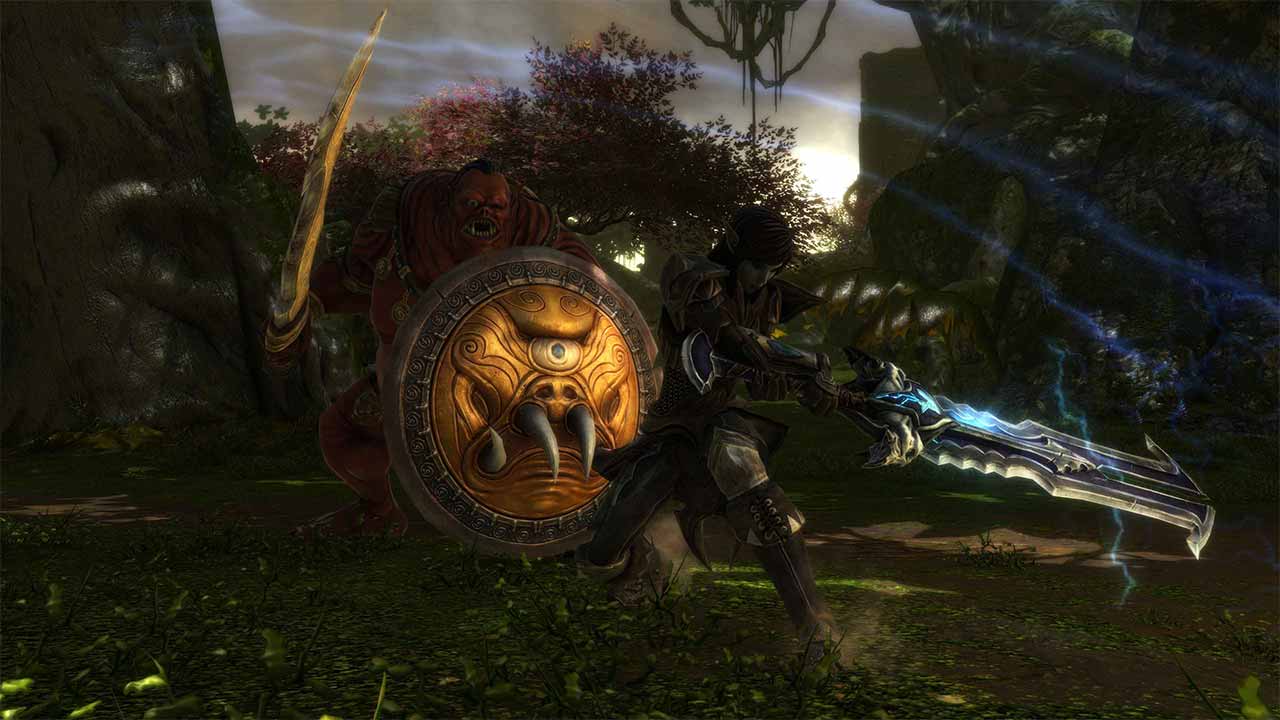 Skills are the special actions that your character can perform to add a twist here and there to your experience, depending on how many points you’ve assigned to each one. For example, alchemy will allow your character to create powerful arcane potions, while blacksmithing will allow you to repair or salvage your weapons or even create new ones! Lockpicking can be used to force your way through the locks you find on chests and doors – based on how many points you’ve dropped into said skill. Perhaps you want to sneak around undetected while obtaining combat bonuses when you manage to attack an enemy unseen.

The more enemies you defeat, the more experience points you’ll be able to obtain. Secure enough experience points, and your character will level up. You’ll go from zero to hero, with a max level of 40 as your ultimate goal. You will also gain experience points from completing quests, using skills, and exploring Amalur in full. The Re-Reckoning version you’ll be playing on Nintendo Switch will offer some rebalances here and there so that the game and the enemies you’ll face also grow as you level up. That way, you won’t feel like you’re walking over weaker enemies just from waving your weapon in their general direction, but it also won’t feel as if the game was being unfair.

Loot is a big part of the gameplay loop for Kingdoms of Amalur Re-Reckoning, and you’ll need to check everything you’re carrying in your inventory so that you can see how good of a loadout you’re actually able to set up. Items will vary in rarity, and the rarer an item, the more powerful it will be. Rarity will be shown right away to you based on the color of the title for said item, going from Common, Infrequent, Rare, Unique, and Set Items, depending on if their title is white, green, blue, purple, or gold, respectively. Out of all these, Set Items are obviously the most important ones, and the more items you have in a particular set, the more powerful each item on the set will become.

Another important part of this game is the many quests you can get for your character. Quests are split into five categories: Main, Faction, Side, Tasks, and Completed. Main quests are those that must be completed in order for you to move the story forward. Faction quests are given to you by the different factions in Amalur. Side quests, as the name suggests, are given to you by a variety of characters as you interact with them and are not mandatory. Tasks are simple quests to complete, sometimes offering you the chance to repeat them more than once. Completed quests are all of the quests you’ve already fulfilled so that you can see how much progress you’ve made. 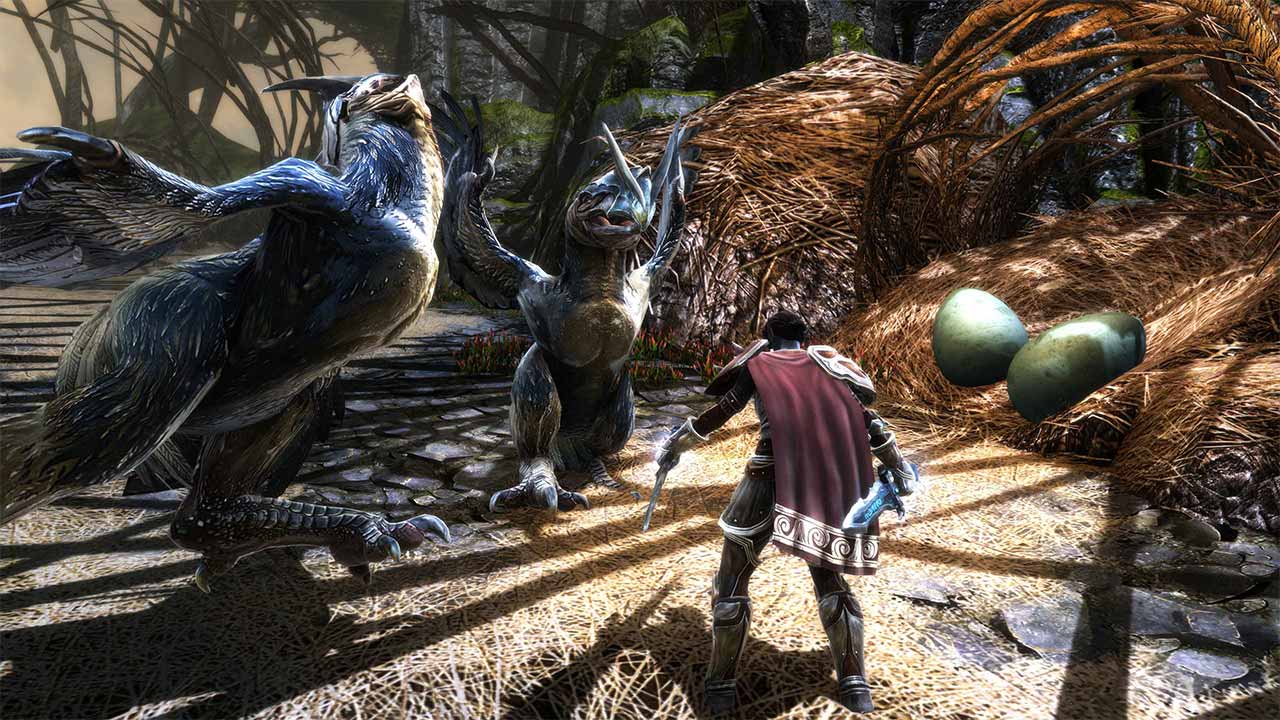 There’s so much to do and so much to see in Kingdoms of Amalur: Re-Reckoning, that you’ll be spending dozens of hours exploring every corner of the land. Add the extra DLC quest lines, items, and equipment that has been rolled into the main game, and it’s easy to recommend this classic action RPG on Nintendo Switch, especially at its $39.99 asking price. Sure, it doesn’t look as good as it does on PlayStation 4, and sure, there’s some slowdown here and there, but you’re trading a higher resolution and a higher framerate for being able to play this massive adventure at home or on the go in an instant.

Disclaimer
This Kingdoms of Amalur: Re-Reckoning review is based on a Nintendo Switch copy provided by THQ Nordic.

A fun action RPG with a ton of content