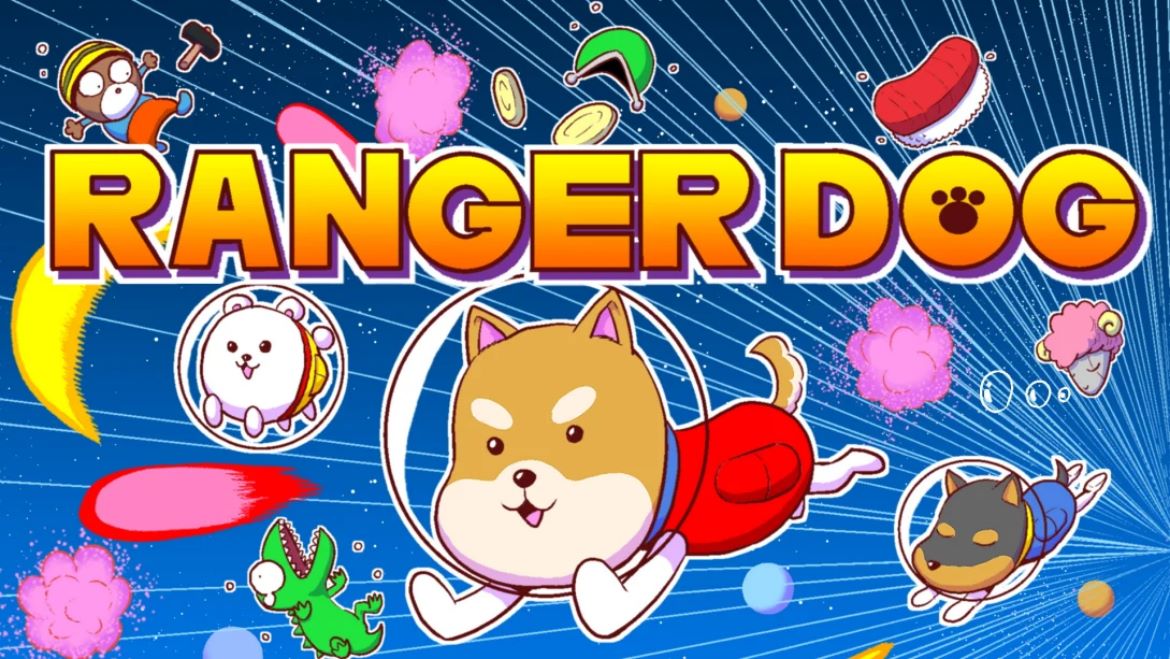 Colorful 2D side-scrolling shoot ‘em up Rangerdog from Hanaji Games and OOEGAMES is ready for you on Nintendo Switch. Learn more in our Rangerdog review!

In colorful 2D side-scrolling shoot ‘em Randerdog from Hanaji Games and OOEGAMES has you taking control of a ranger dog as you explore seven stages in one of three difficulty settings, as you take on larger than life bosses that will try to stop you. You’ll be able to select between three rangers, each one with its own attacks and missiles. There’s Kotetsu, who will gain access to a spreadshot and missiles that will home onto targets, making it the most balanced of the bunch. Riku will have a narrow attack and double missiles, but will be able to get additional, smaller rangers to aid him – as is the case for Maru. Maru will also have missiles that explode when they hit the ground, and can also shoot in two directions, before gaining access to a wide wave shot. All three rangers can also pick up barriers to protect them, as well as special bombs that will deal considerable damage to enemies. 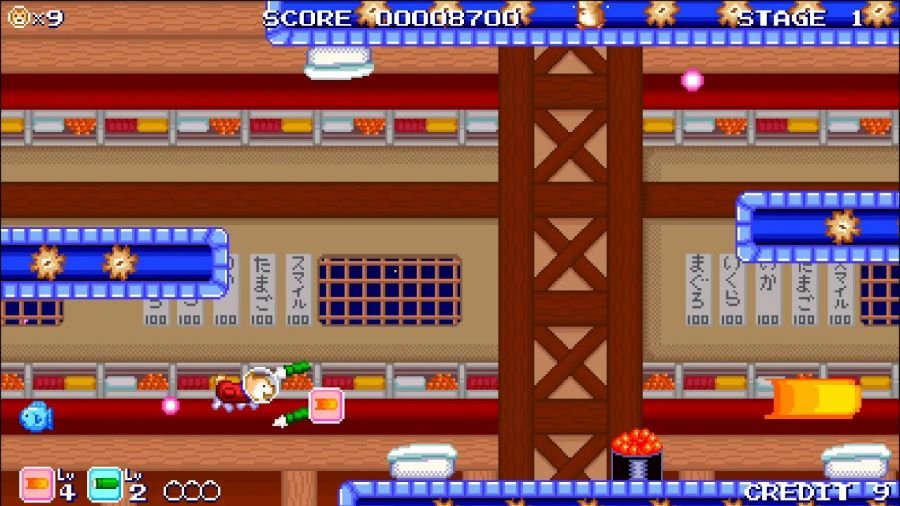 Given that this is a sidescrolling shoot ‘em up, the controls will be simple and to the point. You’ll move your rangerdog with the left analog stick or the D-Pad, shooting with the A button, which will launch your regular attack as well as your missiles at the same time. If you have a bomb in your stock, then you can press the B button to unleash a bomb to damage all enemies on the screen.

You’ll be able to collect power-ups with each of the rangerdogs, and you need to be aware of how picking up the same power-up over and over again will allow you to level it up. Pick two wave power-ups in a row with Maru, and her wave attack will jump up to level 2. The same will happen if you decide to pick two green exploding missiles power-ups in a row. If you grab a different missile power-up or a different attack power-up, then that will bring the new weapon or the new missile down to level 1. To make the most of this system, you can shoot at power-ups to change them into new ones. Be careful as you fly around controlling your rangerdog, because this is a shoot ‘em up of the old-school variety, which means that a single hit is all that is needed to destroy your character. 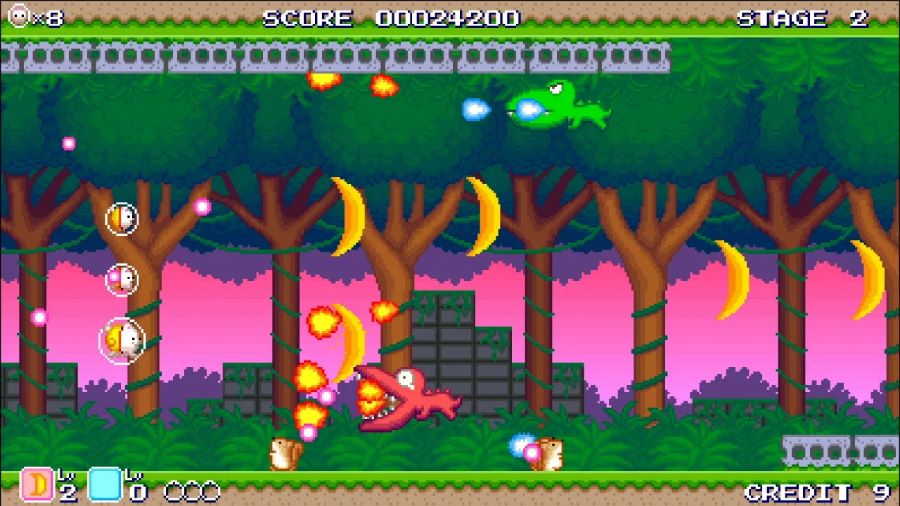 There’s a nice variety of enemies and bosses to defeat as you explore each of the seven levels that the game has to offer. There will be flying fish, pigs, sheep, and flowers to take care of, as well as the enemies that are based on the theme for the level you’re taking on. This includes, for example, conveyor belt sushi for the first level, or lots of slot machines for the fourth level, which will release coins when they’re destroyed. The bosses also go along with said themes, so the first level’s boss will be of the sushi variety, while the one for level 4 will be a small piggy bank you need to fill up with coins to make it grow until it explodes – which is why you’ll have to collect as many coins as possible during said level. 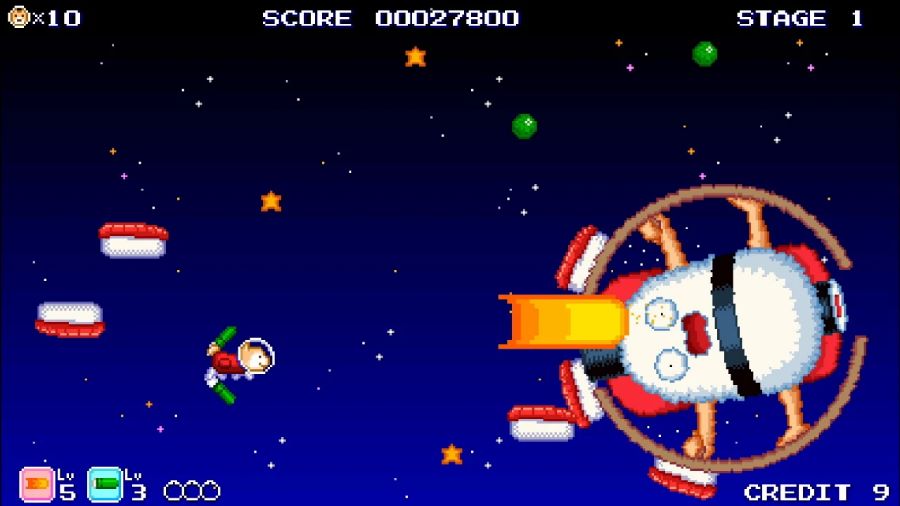 If you’re looking for a fun and colorful shoot ‘em up with space dogs, then this one is definitely going to scratch that itch. There are three dogs to choose from, each with two weapons and two missile types to power-up as you take on seven levels with themed enemies and bosses in a dogtastic experience. Rangerdog is out on Nintendo Switch with a low $5.99 asking price.

Disclaimer
This Rangerdog review is based on a Nintendo Switch copy provided by Hanaji Games.

A fun and colorful shoot 'em up with space dogs 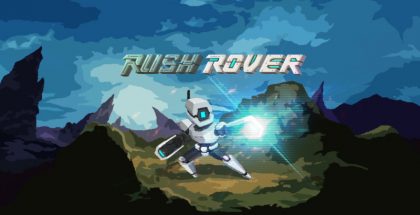