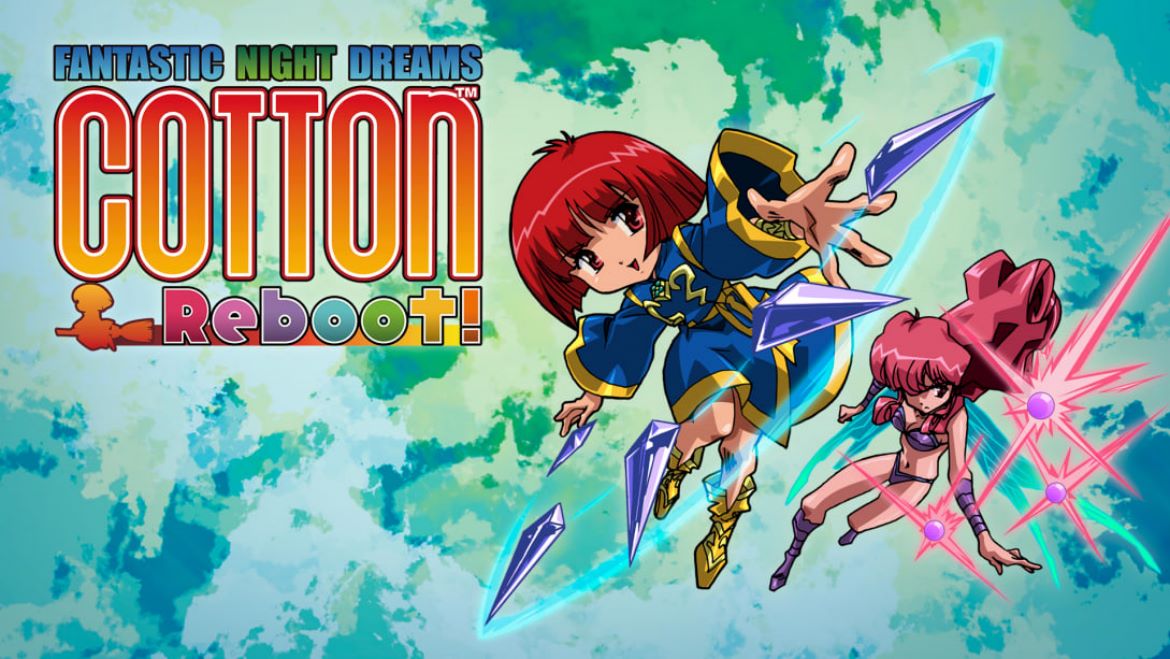 Cotton Reboot from ININ Games and BEEP is a new take on the shoot ‘em up classic for PS4. Check out our Cotton Reboot review!

Cotton Reboot from ININ Games and BEEP is a new take on the classic shoot ‘em up from Success on PlayStation 4. Cotton: Fantastic Night Dreams was originally released back in 1991 on Japanese arcades before getting ported to the TurboGrafx-CD and the X68000, and then later on to the PlayStation, the Neo Geo Pocket Color, and even to mobile. Other than the TurboGrafx-CD version, which did get a release in North America, all other versions were exclusive to the Japanese market. This includes the X68000 version, on which Cotton Reboot is based. 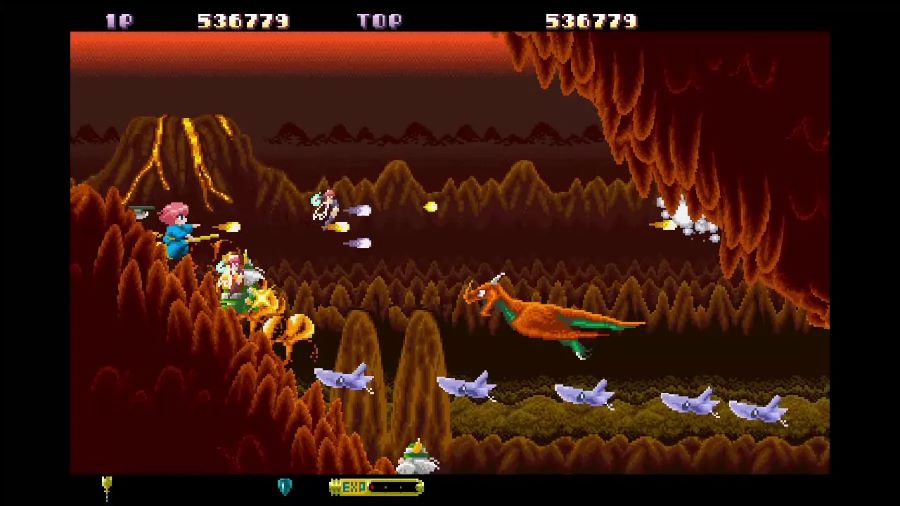 Because of this, you can play Cotton Reboot in one of three different modes. There’s the X68000 Mode, which is a direct port of the original version that was released way back in 1993. You can also dive into Rearrange Mode, which is a revamped take on the X68000 version with new HD graphics, a 16:9 presentation, some reworked gameplay, and other bells and whistles. There’s also a Time Attack Mode during which you can select either a two-minute or a five-minute limit to try and get as high a score as possible.

You can check the game’s manual to learn all of the basics and to get a better understanding of how the game works. Since this is a shoot ‘em up, it’s actually pretty simple! You’ll move young witch Nata de Cotton with the left analog stick or the D-Pad, shooting with the Square button. This button will also be used to launch bombs below you to attack enemies not within your reach. Silk, a fairy, will help you along the way, and you can rescue additional fairies along the way. You can also use magic spells with the X button. There’s also the option of activating Fever Mode with the Triangle button so that you can go high score crazy and boost your total as fast as possible. 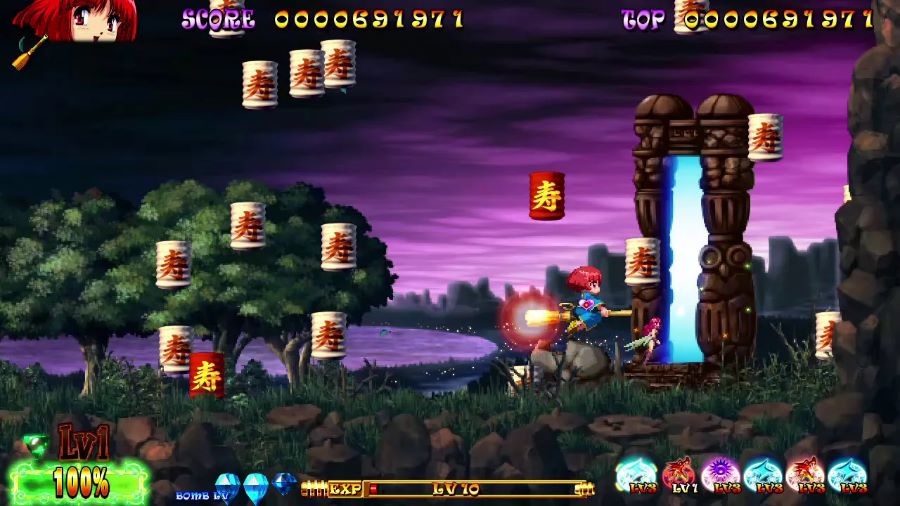 You will also get some power-ups to collect. These include bombs power-ups to boost their attack power or crystals you can shoot through to change your attack so that each shot deals more damage to enemies. Crystals also change color when you shoot them. While yellow crystals reward you with some experience points to increase the damage of your attacks, orange crystals will yield more experience points. You can check the experience gauge at the bottom of the screen to see how you’re doing.

Crystals can also power-up your magic based on their color. Red is for Fire Dragon, blue is for Lighting, Purple is for Bomber, Green is for Summon. You can see magic as a colorful icon on the bottom right of the screen, and you can have up to six of them. Magic can also level up, so the more crystals of the same color that you collect, the more powerful that magic spell will be! Oh, and each magic spell also has a sub-magic effect when you press and hold down the magic button for a bit before releasing it. 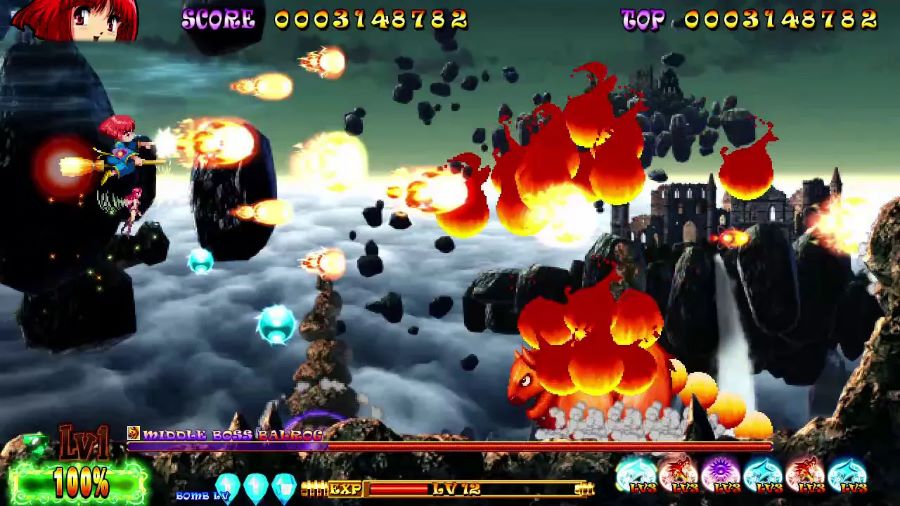 If you keep shooting at a crystal, it will end up turning black. Collecting this special crystal will reward you with 10,000 points, but if you continue to collect more and more black crystals, the score bonus will also increase. Defeating enemies by shooting through crystals will allow you to obtain items that will increase the combo counter so that you gain more points from the enemies you destroy, but if you’re hit, this counter will decrease, so if you want to boost your overall score, you need to pay attention at all times.

Trophy-wise, this one has a full trophy list with a Platinum trophy. It’s not a very long list, with eight Gold trophies and ten Silver trophies. As expected, there are going to be some trophies tied to completing the X68000 Mode and the Arrange Mode. The rest of the trophies will be awarded for beating a boss with a magic spell, for defeating a boss with a fairy, for destroying a black crystal, for beating a stage with six of any magic spells on you, getting the jewel counter to the max, pr for playing the two minutes and five minutes options for Time Attack Mode, to name some examples. It’s a fun list to work through before you can hear that Platinum trophy pop. 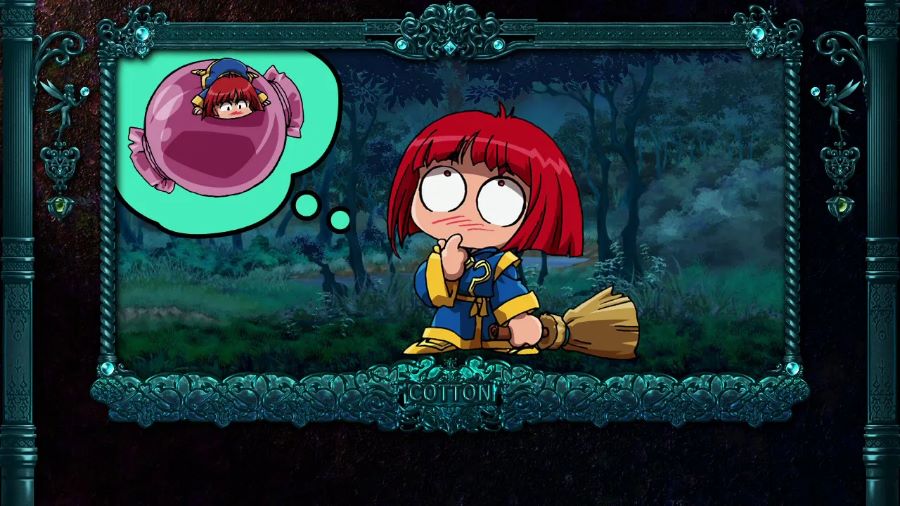 If you’re a shoot ‘em up fan, then you should definitely check out Cotton Reboot on PlayStation 4. It features the classic X68000 as well as a revamped version in the Arrange Mode, which between its HD graphics, remixed soundtrack, changes to some gameplay mechanics, and 16:9 presentation, almost feels like a completely different game. The two-minute and five-minute options of Time Attack mode are a nice addition, adding value to the overall package. Cotton Reboot is out tomorrow on PlayStation 4 with a $39.99 asking price. You can also get a physical edition of the game from Strictly Limited Games by clicking right here.

Disclaimer
This Cotton Reboot review is based on a PlayStation 4 copy provided by ININ Games. 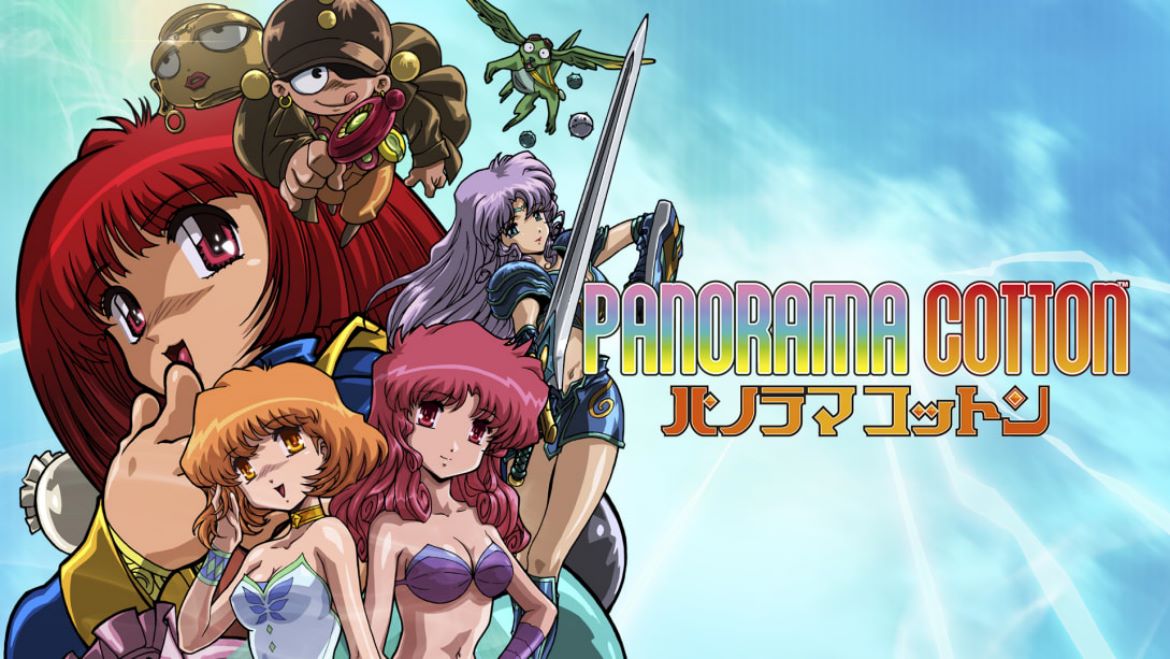