Trigger Witch from Rainbite and eastasiasoft is a fun top-down action game that pays homage to The Legend of Zelda series. Check out our Trigger Witch review!

Trigger Witch from Rainbite and eastasiasoft is a fun top-down action game that pays homage to The Legend of Zelda series. This is not a surprise since Rainbite previously gave us the very fun Reverie on PlayStation 4, PlayStation Vita, and Nintendo Switch. You’ll play as Colette, and your quest will begin in a very familiar way, as you’re woken up by your mother, Hilda, who reminds you that it’s a very important day since it’s when she’ll get to graduate from The Stock, which is why you must get up from bed immediately! 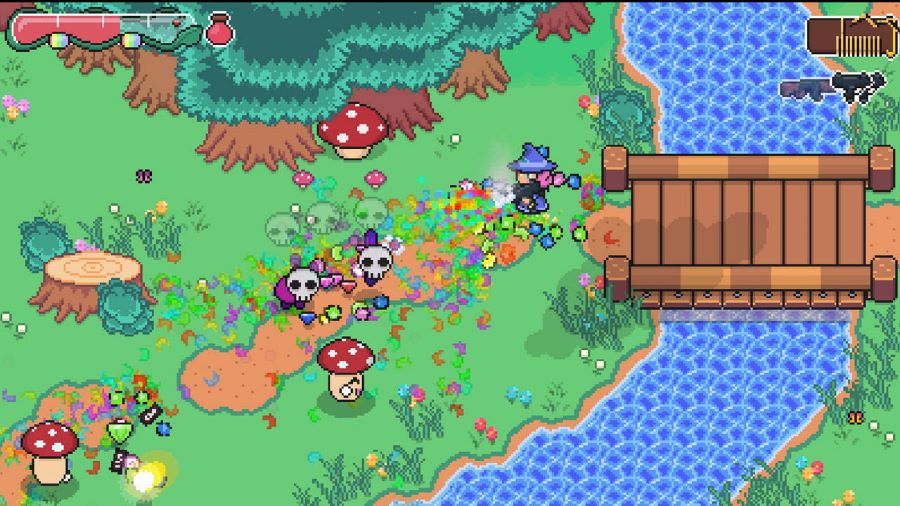 You can decide to play the game in one of six difficulty settings: Very Easy, Easy, Normal, Hard, Very Hard, and Custom. Going from Very Easy to Hard, you will deal more damage to enemies while taking less damage, but you will get fewer gems as you play the game. The opposite happens as you increase the difficulty since you’ll deal less damage, receive more damage, but will get a multiplier for how many gems you collect. There’s also the option of a Custom experience if you decide to move the bars independently, which will affect each of the three aforementioned parameters. You can also play the game in a two-player local co-op at any time, in case you have someone who wants to join the fun.

On her way to the final tests to become part of The Clip, she gains her weapon from the void so that she can take on the upcoming trial. Unfortunately, the portal is also how a mysterious man enters the realm, and he’s definitely up to no good! Once you complete the trial and are accepted as the latest member for The Clip, you’ll be tasked by Hilda with locating this mysterious man as you explore each area around the village and use your mighty Witchcraft and Triggery expertise to defeat the enemies and bosses you’ll meet. 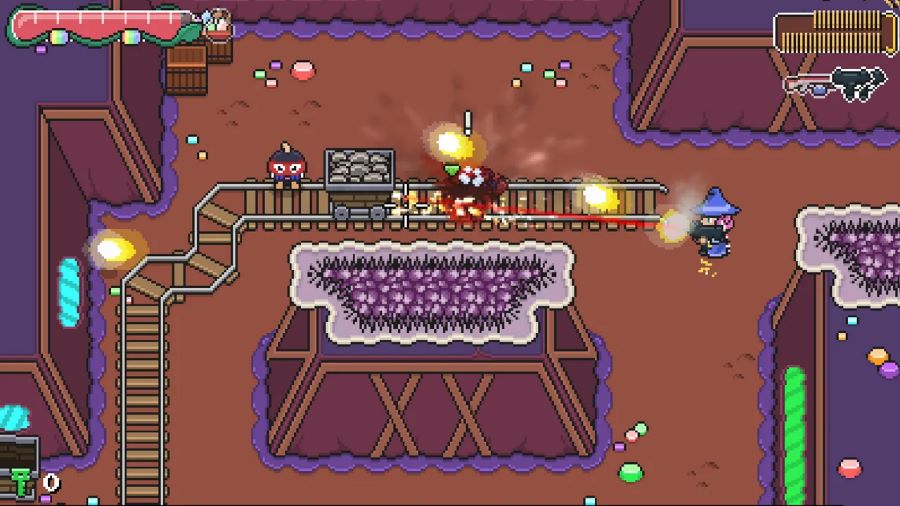 You’ll control your witch with the left analog stick as you aim with the right one as you shoot with the R2 button. You can change weapons with the L1 button and can reload with the R1 button. The L2 button will allow you to execute a quick dash, which will be useful for putting some distance between yourself and your enemies. If you have harvested enough energy from the enemies you defeat, you can recover some of your lost health by pressing the Triangle button. Actions are performed with the X button, which includes activating switches or interacting with other characters. Oh, and if you want to check your map, just press the Touchpad on the DualShock 4! If any of the buttons don’t click with you, there’s the option of remapping them as needed.

The gems you collect can be put to good use by visiting Carcana over at The Blue Cauldron. While there, you can use them to purchase a health upgrade that will permanently boost Colette’s maximum health or purchase maps that will reveal the secrets of the different areas that you’ll visit. You can also visit Litchfeld over at Barrel O’Parts, where you can upgrade your weapons in exchange for gems and old weapon parts. You can boost a weapon’s damage, rate of fire, overall ammo capacity, as well as reload speed. 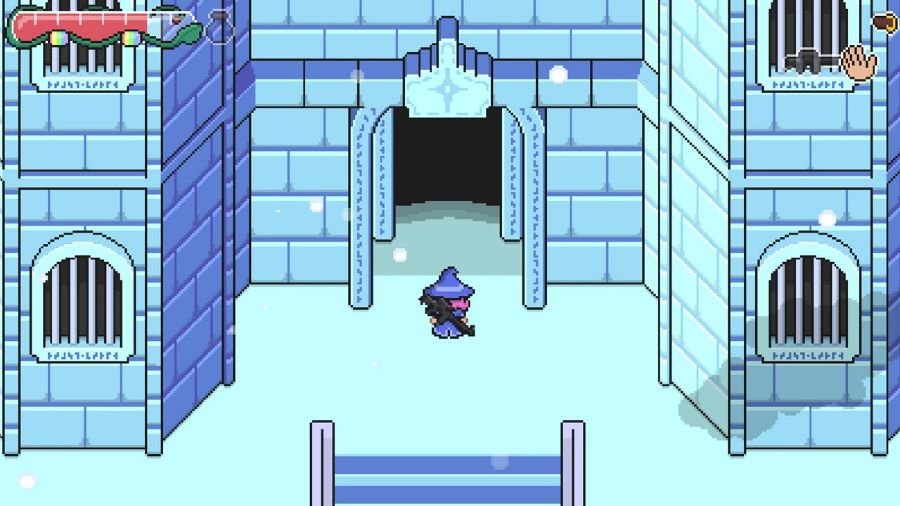 You’ll bullets can bounce on some surfaces, which means you’ll be using your arsenal not only to defeat all the different types of enemies you’ll find – of all shapes, colors, and sizes – but also to solve some puzzles! You’ll get an introduction to this early in the game when you enter an underground mine and must hit a switch to open a door on the bottom-right corner of the screen. Just stand on the bottom-left corner of the screen, aim at the shiny triangle above you, and fire away!

Trophy-wise, this is a game with a long, full trophy list with a Platinum trophy waiting for you at the end of the road. There are story-related trophies that will pop as you progress through Trigger Witch as well as when you obtain each new weapon, but some of them will require that you perform specific actions. These include shooting one of your weapons inside of your house, emptying an entire clip of the Dual Mini Blasters without missing hitting an enemy with each shot, defeating 10 enemies with a single clip from the Heavy Blaster, or beating the Stock Gauntlet time trial with more than 15 seconds left on the clock, to name some examples. There is technically only one missable trophy since it’s tied to opening a chest in the final dungeon, which you can’t revisit after defeating the final boss, but it’s a big chest that is hard to miss. 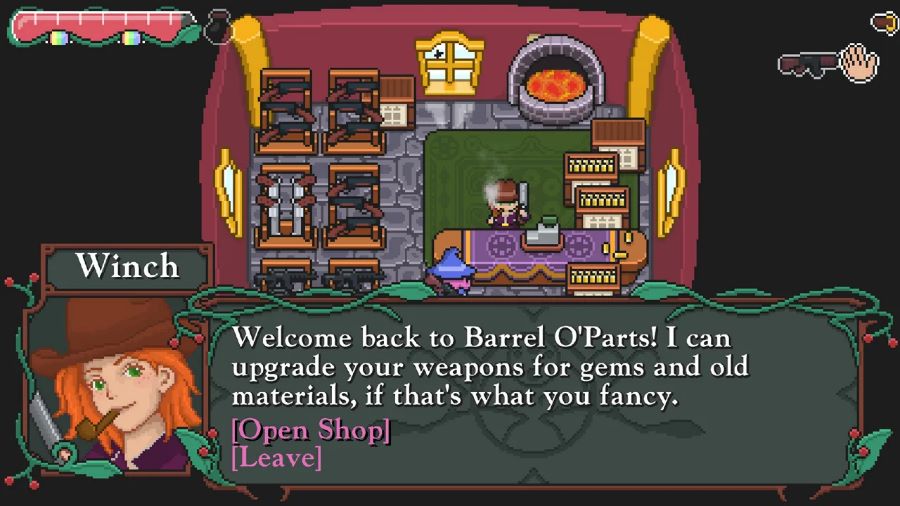 Reverie is a great game that pays homage to the beloved The Legend of Zelda series, and Rainbite has taken another stab at things with Trigger Witch by mixing Witchcraft and Triggery in an adventure that you can customize to your liking by lowering or increasing the difficulty level as needed, with the only penalty being how many gems you get from the enemies you defeat. Trigger Witch is out on PlayStation 4 with a $14.99 asking price, and as was the case with Reverie, it’s one you should definitely add to your collection!

Disclaimer
This Trigger Witch review is based on a PlayStation 4 copy provided by eastasiasoft.

A very fun homage to The Legend of Zelda, but with guns