Monster Train First Class from Good Shepherd Entertainment and Shiny Shoe is a roguelike deckbuilding strategy game with an interesting twist that makes it a must-play on Nintendo Switch. You’ll be playing the side of the monsters, who must protect the last piece of the Pyre that brings them life. This piece is now on the titular Monster Train, and since hell has literally frozen over and the forces from heaven, you must do whatever it takes to bring the Pyre back to its former glory.

You’ll have to power up the Pyre so that it can shine bright and help the demons recover their kingdom, and to do this, you must plan your route just right so that you’re ready for the challenges you’ll face along the way. With more than 280 cards to consider, more than 20 difficulty settings, six monster clans to choose from, being able to merge your units to create more powerful monsters, and having a champion to upgrade during each run, there’s a lot to do in Monster Train First Class.

Oh, right, you’re probably wondering what the twist I mentioned before is? During your time with Monster Train First Class, you won’t be defending only the floor in which the Pyre is located. No, that would be too easy. You will have to multitask as you battle on three vertical battlegrounds at the same time! When you add the roguelike nature of the game, Monster Train First Class is going to feel like a very different experience from anything else you’ve played on Nintendo Switch, as you try to survive through each wave of the evil forces of heaven. 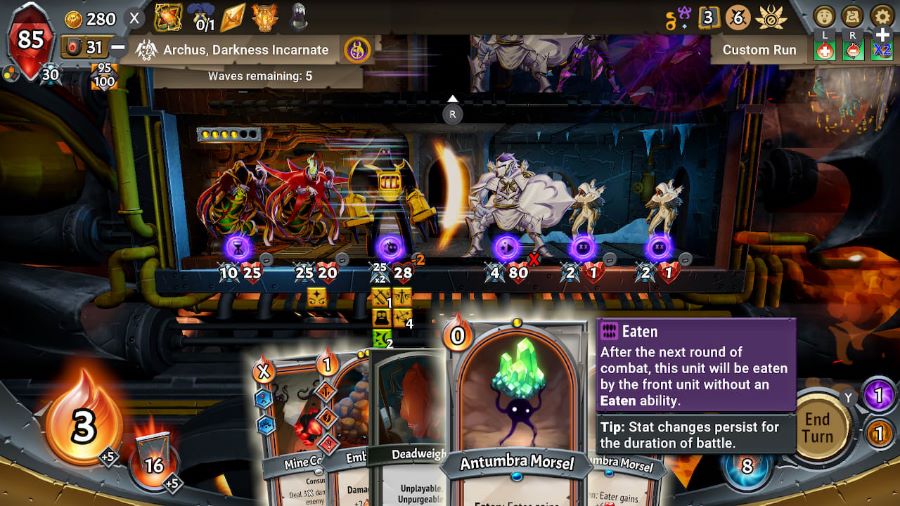 Enemies will board the train at the lowest level of the train, and they’ll move up one level at a time after every turn. If you’re too slow or make mistakes along the way, they’ll manage to reach the top level and damage the Pyre! As expected, if the Pyre is destroyed, that means it’s the end of your run. To avoid this, you’ll need to summon units from your hand to battle each opponent. You can only play each unit card once per battle, so you’ll need to always be planning one step ahead to be able to survive.

You will need to keep two things in mind when playing cards to summon units or to use abilities. Each floor on the train will have a limited capacity, so you must check how much space each unit will take by checking the number of yellow pips on the card. Cards can also have either no cost or have an Ember cost to be cast into play. For example, if you want to play a Torch card to deal two points of damage to an opponent, you’ll have to spend one Ember point. On the other hand, playing your champion – say, the Hornbreak Prince – might have a zero Ember cost, allowing you to plan accordingly.

Your units and your opponents might have a set armor value, shown by a shield below them, as well as a number of hit points for their health. Each point of armor will block one point of damage before being removed, so the better armored a unit, the more damage it can tank. Units will also have an attack stat that will let you know how much potential damage they can deal per hit, and some units will have a special ability that can be put into play to turn the tide of battle in one direction or the other. 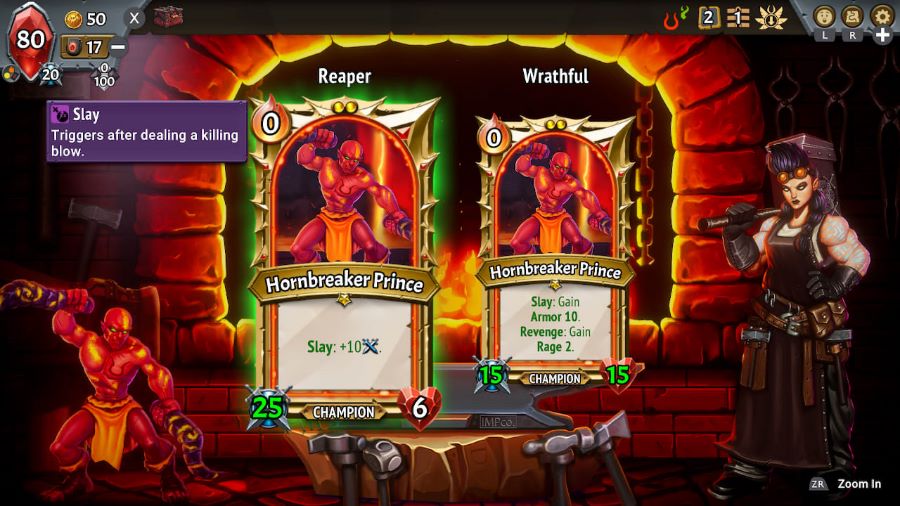 Take, for example, the Hornbreak Prince champion. It has a Multistrike 1 ability, which allows it to strike two times each turn! Since it can deal six points of base damage, that means it can end up dealing up to twelve points of damage in a single turn, as long as your opponents don’t have an armor value or use an ability to negate part of said damage. Every turn, you’ll have to plan for the enemies on each floor as they move up the train, so you’ll have to change floors with the right analog stick as you decide what units to play on what floor.

Your units and your opponents will automatically attack once you’re done summoning units or using abilities to attack enemies or heal the wounds of your group, so you can plan ahead and decide to summon a unit or two at the third floor if the first and second floor are already at capacity, just in case you make a mistake and forget to move to the third floor during your turn to keep a group of enemies from reaching the Pyre and dealing damage to the last shard of demonic hope.

The good news is that while your Pyre obviously can’t move, it will be immune to most spells and effects, and it does have a high hit point and attack value, so it will defend itself when in danger. This means that even if some enemies manage to get past your units and if your spells aren’t strong enough to defeat them along the way, there’s one final shot at your Pyre dealing just enough damage for it to shine bright for one more day. Just be sure to do whatever it takes to beat the boss during the final wave to win the battle! 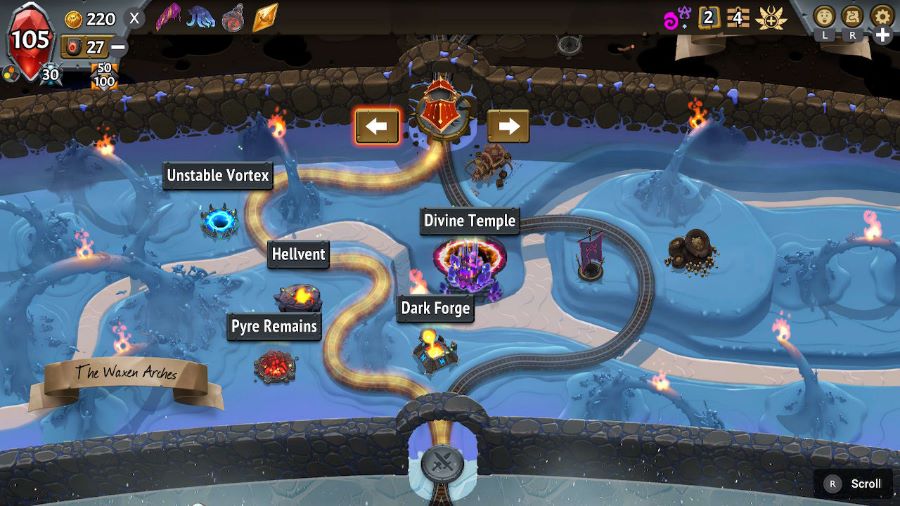 At the end of the battle, if you survive, you’ll get to collect the spoils! This includes some of the in-game currency – more on this in a bit – as well as pick new cards from the packs that you open up along the way – and no, there are no microtransactions in this one! You will get to pick from three cards per pack, and you’ll have to think of what can best help your current run so that you can overcome any shortcomings for your current deck.

The in-game currency can be spent with the merchants you’ll find along the way so that you can purchase some goods depending on the type of merchant you find. If you end up at one of a magical nature, then you can spend your money to upgrade a spell to add boosts, such as reducing its cost by one Ember, upgrading a spell to gain permafrost, or perhaps paying to remove a card from your deck that you feel is not helping you that much. You can also spend some coins to re-roll the available goods if you feel that nothing of what’s for sale is good enough. These magical boosts I mention will only apply to one card and not to all duplicates of said card on your deck.

Your Pyre will be damaged during your run because there’s no way you can prevent every single opponent from ever reaching the last floor. The good news is that you can find enchantments along the way that can heal the Pyre, and you can also find Pyre remains that will restore a good chunk of health to the Pyre on your train. This might mean that you’ll have to choose a route that, say, does not include the option of adding an extra unit to your group or finding some extra coins to use at the next merchant, but since keeping your Pyre in one piece is the main objective, when given the option, you should always take the route that has some Pyre remains.

Don’t get cocky and try to bite more than you can chew, or the game will make you pay for it! This applies to the option for activating trials during the battles you take on. When you activate a trial, that battle will be more difficult since enemies will have a buff or something extra to consider – such as, for example, enemy units entering the battle with an extra armor value, which will make it harder to defeat them. The good news is that the game will also grant extra rewards for you if you manage to win. 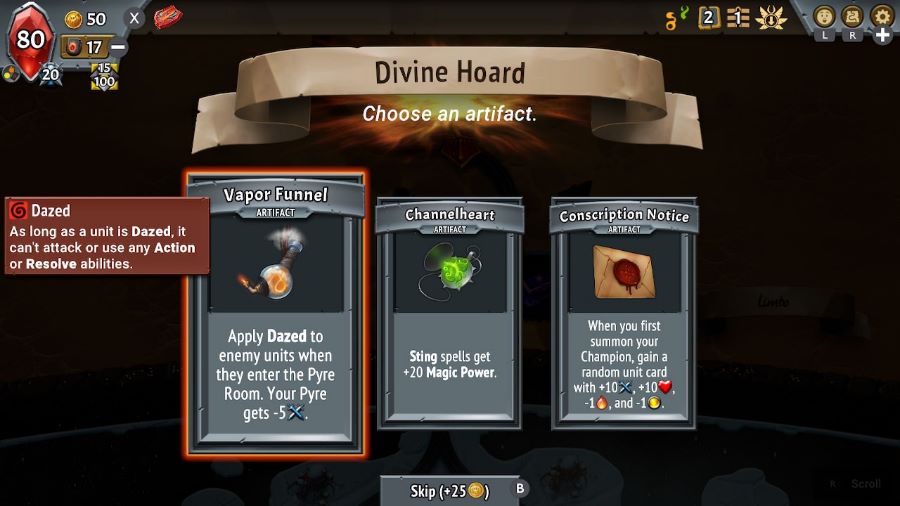 Monster Train First Class is a roguelike deckbuilding strategy game that is a must-play on Nintendo Switch. The game does a great job of teaching you all of the basics during your first run before you end up dying and doing it all over again from the start. You’ll learn from your mistakes, and maybe you will get some better cards during your second run. Or your third run. Or your tenth run. Or maybe your champion will be strong enough by the 20th run to bring you closer to defeating the Seraph and perhaps unlocking The Last Divinity battle. Monster Train First Class is an easy one to recommend on Nintendo Switch, and it’s out now with a $29.99 price.

Disclaimer
This Monster Train First Class review is based on a Nintendo Switch copy provided by Good Shepherd Entertainment. 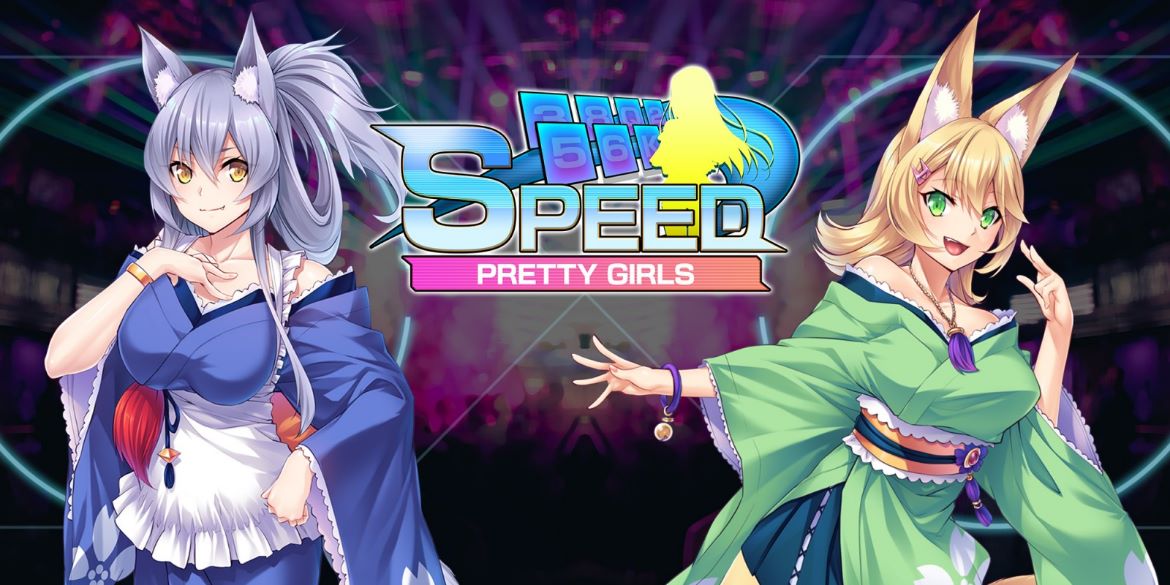 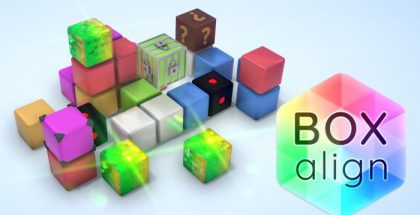 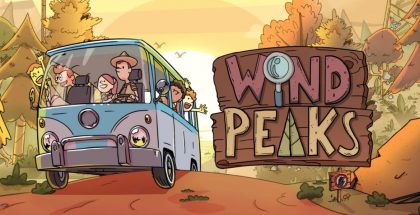 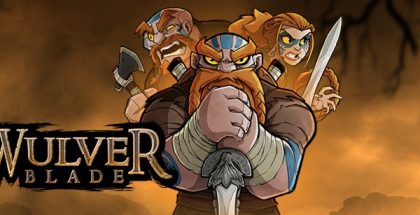