Fury of DraculaGame Reviews
No Comments 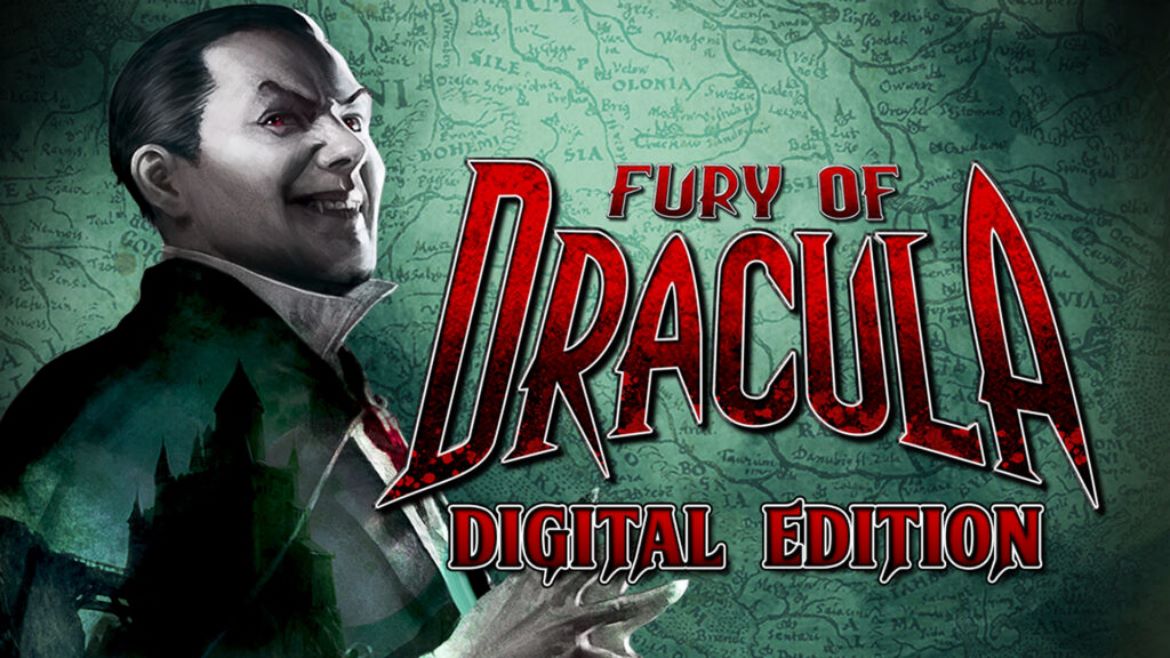 Fury of Dracula from Nomad Games and Dovetail Games is the digital adaptation of the beloved board game for PS4. Learn more in our Fury of Dracula review!

Fury of Dracula from Nomad Games and Dovetail Games is the digital adaptation of the beloved board game for PlayStation 4. The board game was first published by Games Workshop way back in 1987, and this digital edition is based on the 4th edition of the board game. As the title suggests, you’ll be playing either as Count Dracula as you try to rule Europe, slowly but surely boosting your influence over the land. Or perhaps you want to play as a team that includes Dr. Abraham Van Helsing, Dr. John Seward, Lord Arthur Godalming, and Mina Harker in an attempt to stop Count Dracula before it’s too late?

I’ve previously reviewed the excellent Talisman: Digital Edition, as well as the charming and addictive game Mystic Vale, so I was certainly ready to take Fury of Dracula for a spin on Sony’s console. It’s a one vs. many style of board game full of gothic horror and evil lurking around every corner. As Dracula, you’ll wreak havoc as you try to avoid the four vampire hunters. As the hunters, you must try to stay one step ahead of Dracula as you chase him around Europe in order to end his reign of terror. 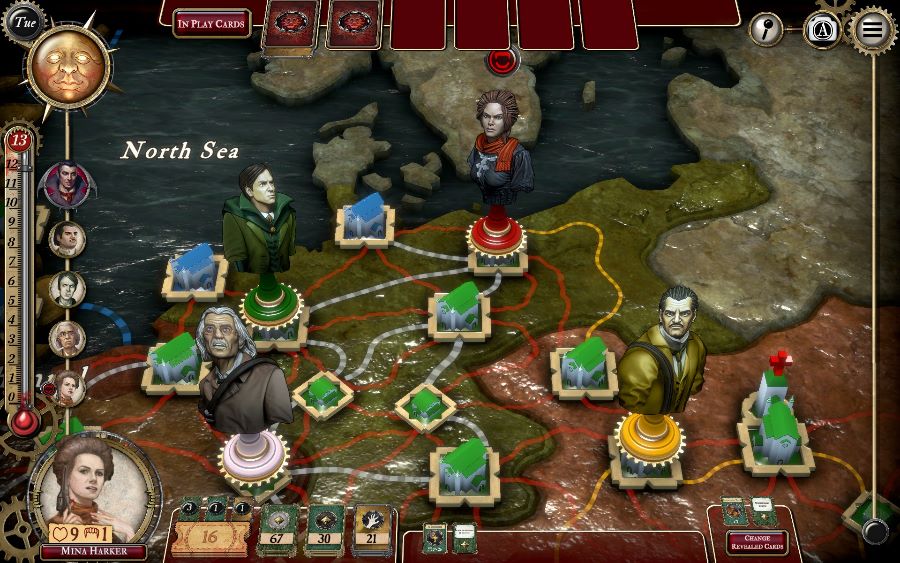 While the hunters have the advantage of being a group and having skills to use, Dracula has the possibility of using hidden movement to avoid them. On top of this, Dracula can also lay down some traps to lure the unsuspecting hunters. Oh, and, you know, he can also spawn new vampires along his trail, which is certainly bad news! As expected, to win, the hunters must find and destroy Dracula once and for all. How does Dracula win? By accumulating 13 influence points by spawning new vampires and by defeating the hunters.

Each turn in Fury of Dracula: Digital Edition will be composed of a hunter phase and a Dracula phase. During each hunter phase, there will be a day and night cycle, going from dawn to day to dusk to night. Based on this, the hunters can perform different actions. They can act during day and night but must fight Dracula if it’s dawn or dusk and Dracula has been revealed. Once the Dracula phase kicks in, Dracula can move around Europe while destroying everything – and everyone – on its path. Dracula leaves behind a trail, and it’s thanks to this that the hunters can try to catch up to him before it’s too late.

Hunters must make the most of their tools in order to survive, as well as of how the board is split into seven regions in total: Austro-Hungarian, Baltica, Brittanica, Germania, Iberia, and Italia. Each region will contain larger or small cities, with large ones having a square-shaped icon below them and small ones having a diamond shape. Cities are connected by roads, which are red lines, and by railways, which are white and yellow striped lines. If a city is on the coastline, they will act as ports and will have a blue roof on top. 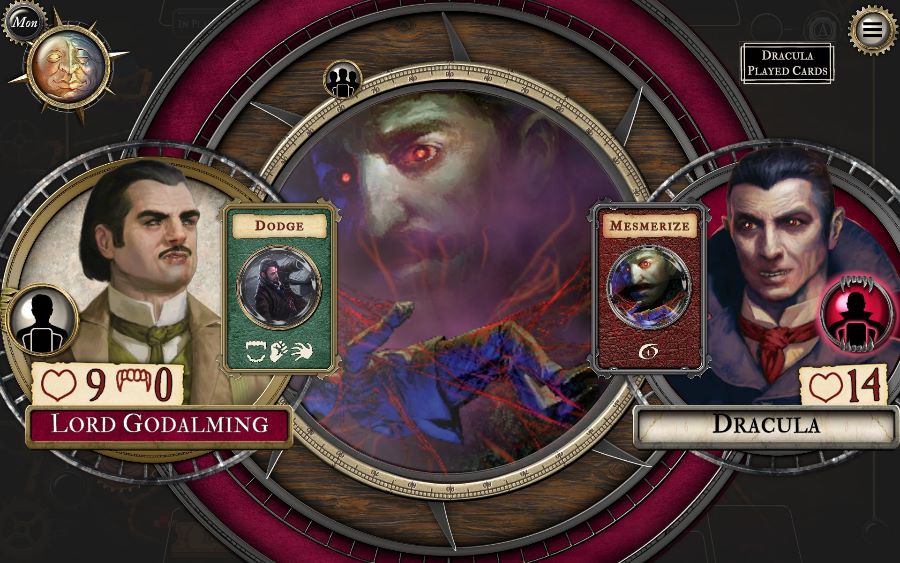 On the right side of the screen will be the actions that the hunters can perform. These include moving around the map by road, railway, or boat or selecting pass to end that hunter’s turn without taking any further actions. There’s also Reserve Ticket, which draws a train ticket that is needed to well ride the train. Rest allows you to remove a single point of damage from that hunter.

Search is a valuable skill since it will allow you to reveal an encounter card if the location you search is on Dracula’s trail. There’s also the Special action which activates that hunter’s special ability, using the cards on its hand – if they can do so. There’s also Supply, which draws Event and Items cards to use during your turn. The last available action on the right side of the screen is Trade, which allows you to trade items between hunters that are in the same location. 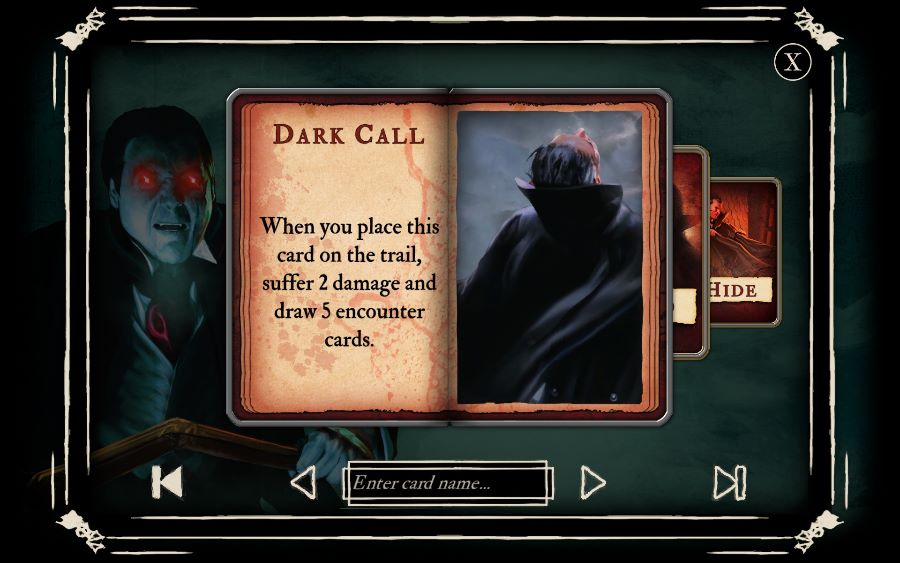 Each hunter will have its current hand at the bottom of the screen, which will contain the Event and Item cards it has collected, as well as any train tickets it has obtained. Item cards are useful since they allow to turn the balance in a hunter’s favor. Event cards represent events that will happen during the game as you hunt down Dracula. Hunters can hold a maximum of three Item cards and three Event cards in their hand, with the exception of Dr. John Seward, who has an ability that increases this to four cards max of each type.

Dracula can’t see what cards a hunter is holding unless said hunter has been bitten. If that is the case, then the hunter must reveal one card per active bite, thus lowering its advantage over the dark lord. One of the hunters, Mina Harker, has this as a disadvantage since she always has one bit, so she must, therefore, always have one of her cards revealed for Dracula to see. 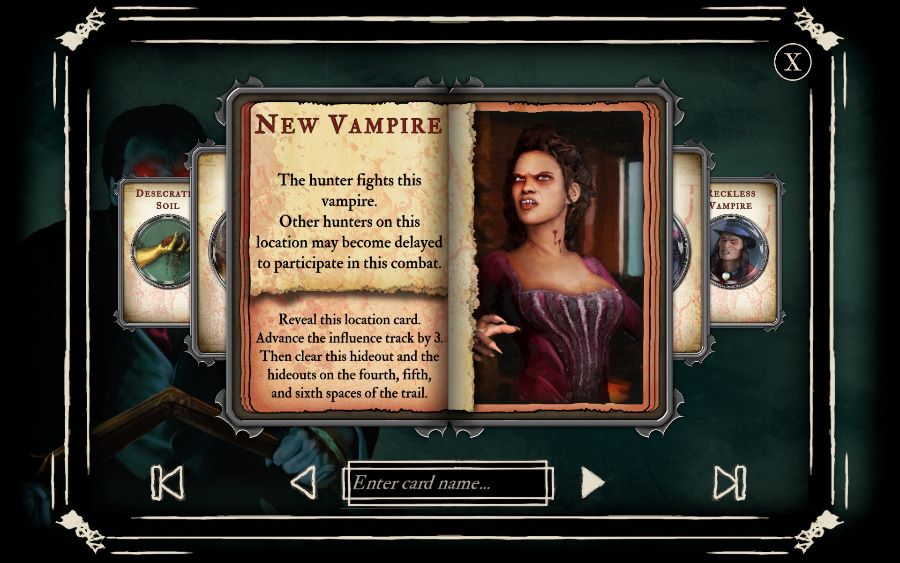 Before you can dive into a game of Fury of Dracula, you must set up the board! First up, hunters and Dracula are placed on the board. The characters are always placed in the following order: Lord Godalming, Dr. John Seward, Van Helsing, Mina Harker, and then Dracula at the end. You’ll place characters in one of the regions and then select which city they will begin at. After this, each turn will play out as needed, with hunters searching for Dracula and the dark lord sneaking around, setting up traps to defeat them.

But, what happens when a hunter does find Dracula? Then combat will begin! During combat, each character will be using a hand of cards that represent what actions they can take in battle. Hunters will always have dodge, punch, and escape as part of their combat cards. Any Item cards collected up to that point can then be used during combat. Dracula will then select the card to use in combat, and both cards will be placed face down. After this, both cards are revealed, and you’ll see if the card a hunter selected cancels out Dracula’s card – which happens if an icon on Dracula’s card matches the icon on the hunter’s card.

The game features a full trophy list with a Platinum trophy for you to add to your collection. The list includes 4 Bronze trophies, 16 Silver trophies, and 5 Gold trophies. There’s a lot to do in this one, and you’ll have to complete all core game tutorial segments, win a game as the hunters, win a game as Dracula, travel your first 500 miles by road, play an online multiplayer game, play as Dracula and heal yourself at Castle Dracula, bite 50 hunters across several matches, trade an item with another hunter, and more. 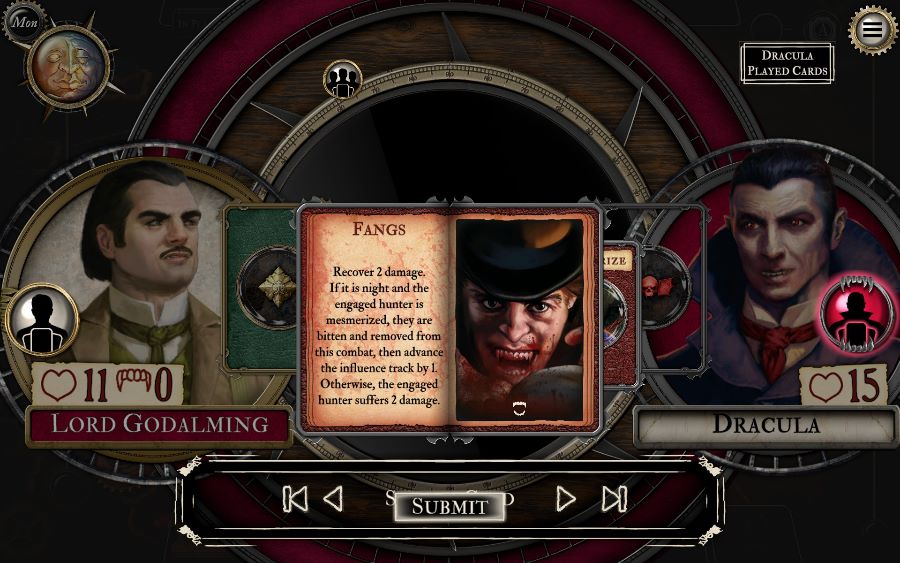 Fury of Dracula is an outstanding board game, and now thanks to Nomad Games and Dovetail Games, you can enjoy a digital version on PlayStation 4 that makes for an excellent way to enjoy this engaging experience. There’s a ton of replay value, since you can play as both the hunters and Dracula, play locally or online, and find new ways to succeed as you run and search for Dracula all over the continent or play as the dark lord as you leave behind a trail of chaos. Fury of Dracula is out on PlayStation 4 with a $19.99 price,

Disclaimer
This Fury of Dracula review is based on a PlayStation 4 copy provided by Dovetail Games.

Excellent digital version of an outstanding board game 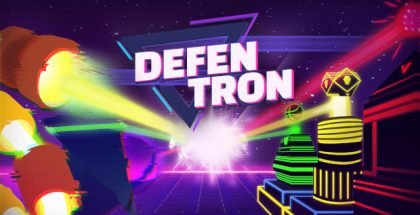 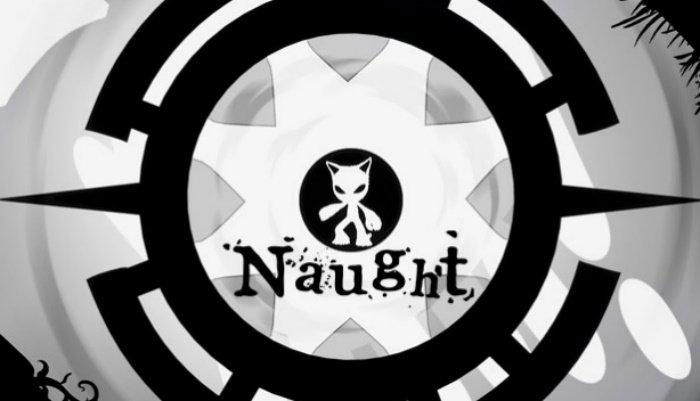