Highly customizable robot battle racing game Break Arts II from Mercury Studio and Playism is ready for action on PlayStation 4. The game was originally released on PC back in 2018, and it’s now on Sony’s PS4 console, for all PlayStation fans to enjoy the fast-paced and hectic cyber battle racing. You’ll get a chance to build your robot from a wide variety of parts, gaining access to more and more as you progress through the game. It’s a game that at times feels like if F-Zero and Wipeout had a baby, and it grew up to be a mech pilot. 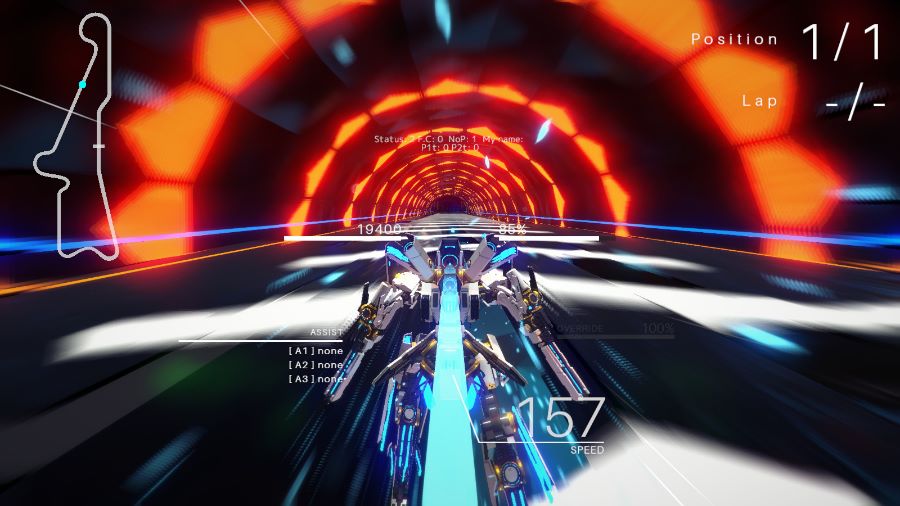 You can take on this one in one of three game modes: Single-Player Mode, Time Attack Mode, or Online Multiplayer Mode. As expected, you should definitely start to play in the Single-Player Mode before even considering diving into the other two since there’s a lot for you to learn as to what makes Break Arts II tick. Since each part that you can add to your robot can give provide you with new abilities, and because some parts can be folded, rotated, or separated, you can always find the right combination for your design goals and for that extra boost needed to win the next race. Oh, and once you’re satisfied with how your robot looks, you might want to take advantage of the Photo Mode to take some pictures of your mech while adding a variety of effects to each configuration!

Once you’ve customized your robot with the initially available parts, you’ll be sent straight into a race to get the hang of things. You’ll pilot your mech with the left analog stick, using the right one to aim around you. Acceleration is automatic, and you can brake by pressing down on the left analog stick. To activate your L and R attacks with the L1 and R1 buttons, you can boost with the L2 button and can side boost with the R2 button. Be careful since this will use up some of your energy! You have three assists to map to the Square, X, and Circle buttons. If you need to reposition your mech, you can do so by using the Touchpad on the DualShock 4. 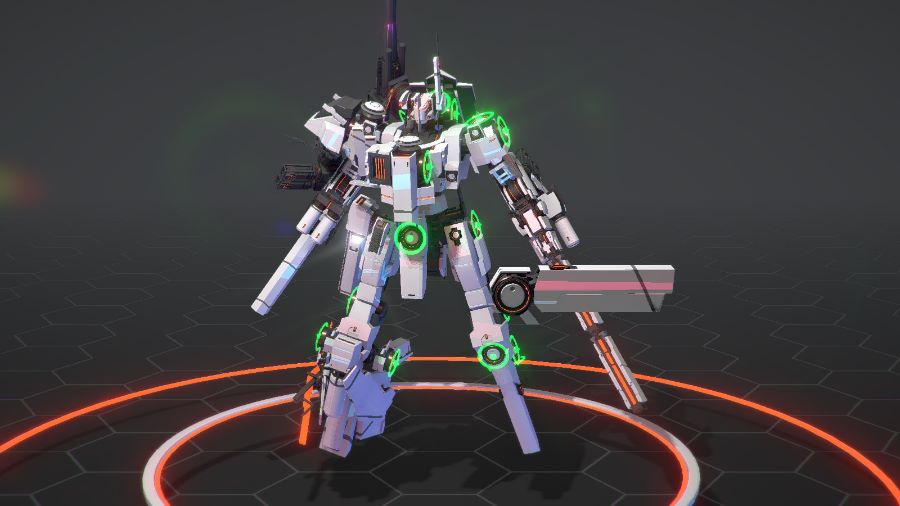 During a battle race, once your Override gauge reaches 100%, you can press the L3 button to activate it. When Override is on, your mech won’t break down, you’ll have unlimited energy, and all of your weapons will fire twice as fast! This is very important for when you’re in the lead since it will allow you to put some distance between yourself and your opponents, but it’s twice as important for when you’re lagging a bit behind since you can boost your way past enemies as you unleash a world of hurt.

When I said that this was a highly customizable robot battle racing game… I meant it! As you take on more and more races and improve your ranking, you’ll unlock new parts to customize now only how your mech looks but also how it performs on the track. When editing your robot, you’ll need to pay attention to how each new part affects its shield endurance, data load, speed, cornering, total energy, energy regeneration per second, boost acceleration, and boost energy consumption per second. And that’s only for your robot! 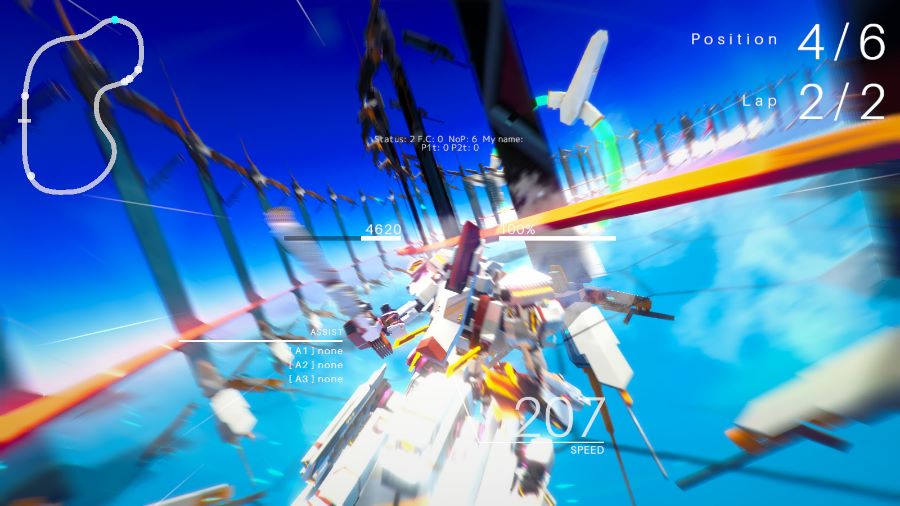 You can also customize the L and R weapons by adding modules, which will have a direct effect on a variety of stats: data load, shield endurance, attack power, shot power, recharge time, heat exhaust time, energy reserves, weapon type, and homing type for its attacks. Once you customize each weapon, you then equip them on your mech and can take the unit out for a spin to see if the choices you’ve made are worth it or not. You can always go back and edit your mech and its weapons between races, which you must certainly do whenever you unlock better equipment.

The game has a full trophy list with a Platinum trophy, and it will quickly reward you with one trophy as soon as you start to play! The full list includes 5 Bronze trophies, 6 Silver trophies, and 8 Gold trophies. As mentioned before, you’ll get a trophy just by starting the game. After that, you’ll unlock trophies by increasing your rank and unlocking additional pieces to customize your mech, for checking out the Time Attack Mode, for taking part in an Online Race, for spending 1, 10, 30, and 99 hours in the Machine Design section reaching a top speed of 500 in a race, and being #1 on all races – with the exception of extras – to name some examples. 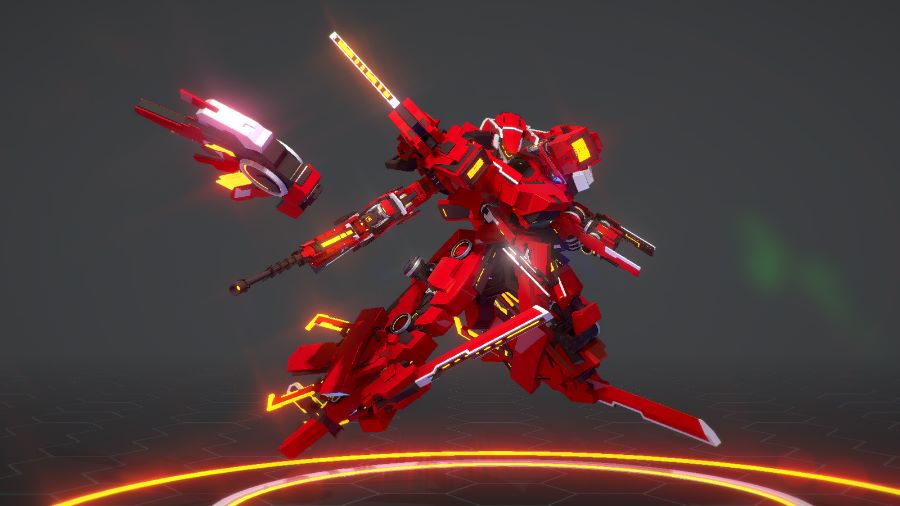 Break Arts II offers a deep mech customization system that allows you to build your robot just as you want it so that you can have the right one to take on each battle race track in your future. The customization side is excellent, but the racing side feels a bit all over the place. In order to keep the framerate manageable, there’s going to be a lot of pop-in during each race, which might rub some people the wrong way – and even with the pop-in, some of the more action-packed moments bring the game close to a halt. It’s also very hard to find any opponents online even if you switch around region in-game, and since one of the trophies requires that you play at least one online race, you’re probably going to have to find a boosting partner for it. Break Arts II is out on PlayStation 4 with a $19.99 asking price.

Disclaimer
This Break Arts II review is based on a PlayStation 4 code provided by Playism.