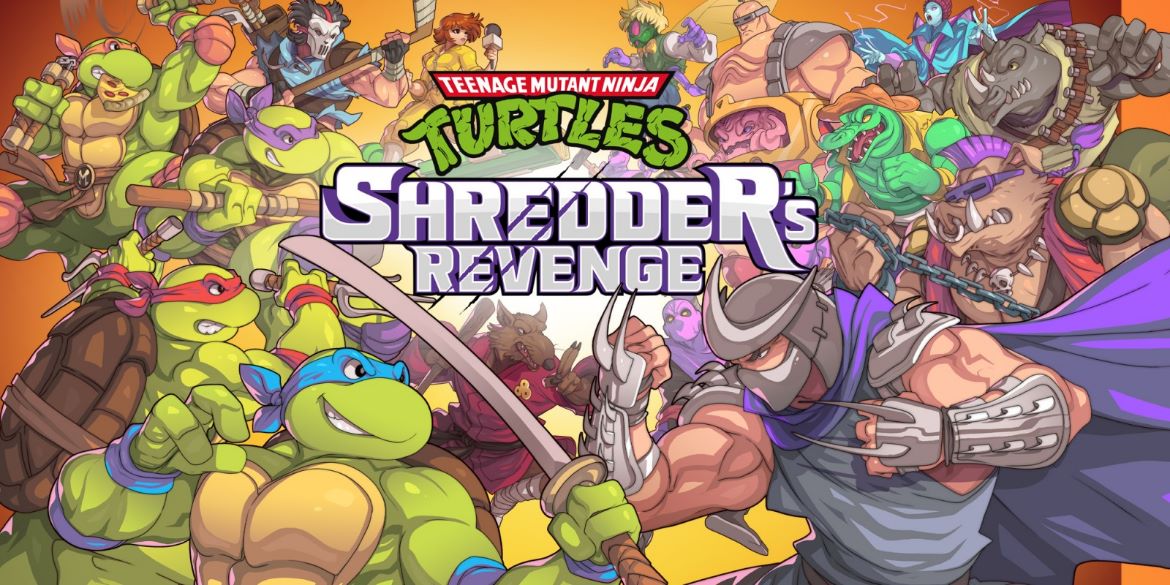 Teenage Mutant Ninja Turtles: Shredder’s Revenge from Dotemu and Tribute Games is an old-school infused beat ’em up that is a must-play on Nintendo Switch. After a most excellent animated intro that sets the mood for this new beat ’em up experience, your adventure will begin with an all-new story that pays homage to the 1980s Teenage Mutant Ninja Turtles TV show. This is why the turtles and the rest of the characters have a particular design and why their pixeltastic look works so well for this game.

You can play Teenage Mutant Ninja Turtles: Shredder’s Revenge in one of two options: Story Mode and Arcade Mode. There are also three difficulty settings available from the start: Chill, Okay, and Gnarly. For the Story Mode, you’ll be able to progress through the game at your own pace, as your progress is saved as you complete each stage or when you go back to the world map. You can also go back to the character selection screen and select another character to carry on with your run. Arcade Mode gives you a more classic arcade-style experience, with limited lives, no saved progression, and you will use the same character from start to finish. 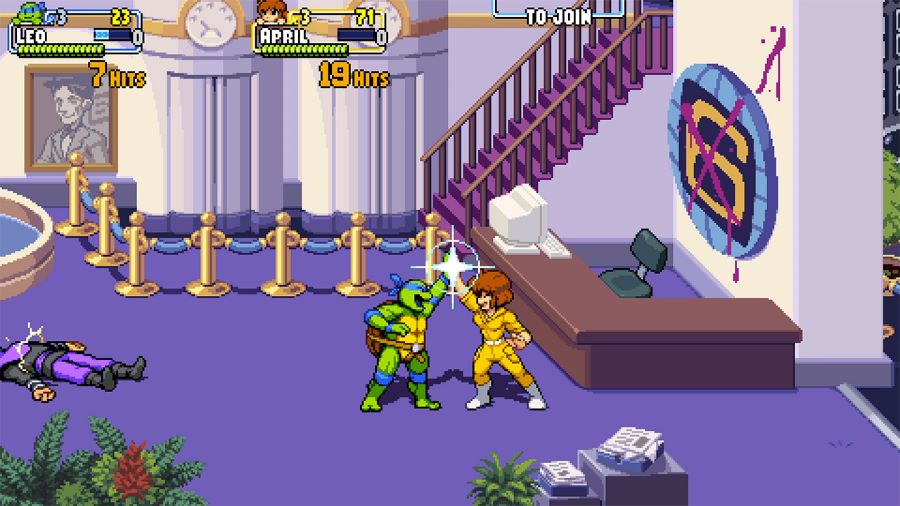 The story for this one has you rushing to save the people at Channel 6 since Bebop and Rocksteady are up to no good and are stealing super gnarly devices to aid in Krang and Shredder’s latest plan. You’re going to battle a ton of foot soldiers in this one, as well as take on a set of bosses that will bring you back to the 80s in an instant. Channel 6 is just the start since you’ll be traveling from Manhattan and Coney Island to the sky as you try to save the day before it’s too late. You’ll even get to visit Dimension X!

As for the characters you can select, they include the four Teenage Mutant Ninja Turtles – Leonardo, Raphael, Michelangelo, and Donatello – along with fan-favorites Master Splinter and April O’Neil. There’s also a bonus character to consider, which will unlock after you’ve completed the game once: Casey Jones! Each character will have different stat values for range, speed, and power for you to consider, so be sure to check them all out to see which one best suits your playing style.

As expected, Donatello has the best value for reach, while Master Splinter is the most powerful of the group. Leonardo offers an all-around balanced character. Raphael favors power over each. Michelangelo favors speed above everything else. As for April O’Neil, she excels at speed while also having a good range for her attacks. Since the game offers multiplayer for up to six gamers at once, things can get pretty crazy with a full group taking on the action! 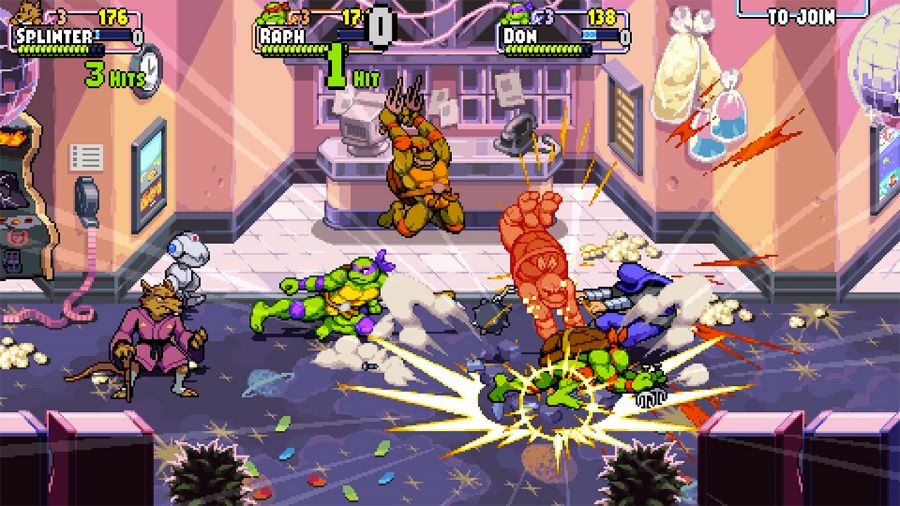 You’ll move your character with the left analog stick or the D-Pad as you attack with the Y button, unleashing combos as needed. You can jump with the B button and then press the Y button for a dive attack. If you press the Y and B buttons at the same time while on the floor, you’ll perform a rising attack. Press and hold down the Y button, and you’ll charge up a heavy swing. Get close to an enemy, and you’ll grab it, which will allow you to toss an enemy over the shoulder, slam it around for a bit, or throw it onto the screen.

Double-tap left or right on the left analog stick or the D-Pad, and then press the B button, and you’ll perform a slide attack, which is a great way of getting closer to enemies while dealing some damage. Press the B button twice and then use the Y button to do a somersault slice. The A button can be used to roll out of the way to escape from damage. If you’re thrown onto the ground, pressing the A button as you land will allow you to roll up right away. If you press the B button, you’ll flip back into action.

If playing with others, you can get close to an ally and press the L button to cheer them up, removing two of your hit points to give them a health boost. If an ally is downed, get close to them and press and hold down the L button to reanimate them. The R button can be used to taunt enemies, which will replenish your Ninja Power. Once you have a charge, you can use a super dive attack by pressing the X button when in mid-air. If you press the X button after a roll, you can unleash a super flying attack. And if you have max Ninja Power, pressing the R button will allow you to enter Radical Mode, which will greatly boost your attack power. 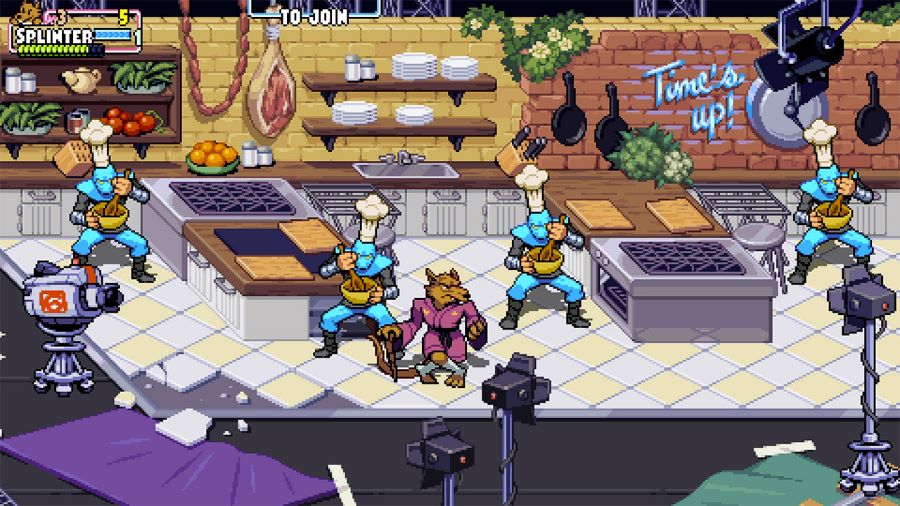 As you play through each level and defeat enemies, you can work on completing some challenges for bonus points. These include objectives such as defeating 10 Foot Soldiers using combo finishers, defeating a couple of them by using traps or completing a level without receiving any harm. You can level up as you progress through the game by adding points to your overall score based on your performance. Leveling up will increase your Power Level. This will allow you to increase your hit points, store more Ninja Power, gain an extra life, as well as unlock additional super attacks and Radical Mode. There are also secrets to be found in each stage. Some of these include finding special characters that will present you with collectible requests. Complete collectibles requests to be rewarded with bonus points to level up!

There’s also an in-game achievement for you to work your way through. These include some story-related achievements for completing this or that stage – no spoilers! There are also achievements for completing Story Mode, seeing all of the different endings in story Mode, completing Arcade Mode in multiplayer, completing Arcade Mode in the hardest difficulty, beating it with one credit (good luck with that one!), reviving a teammate in multiplayer, cheering up the same teammate three times in a single stage, destroying 200 breakable objects, completing all special requests in Story Mode, finishing a boss with a Super Attack, or performing a 250-hit combo string, to name some examples. 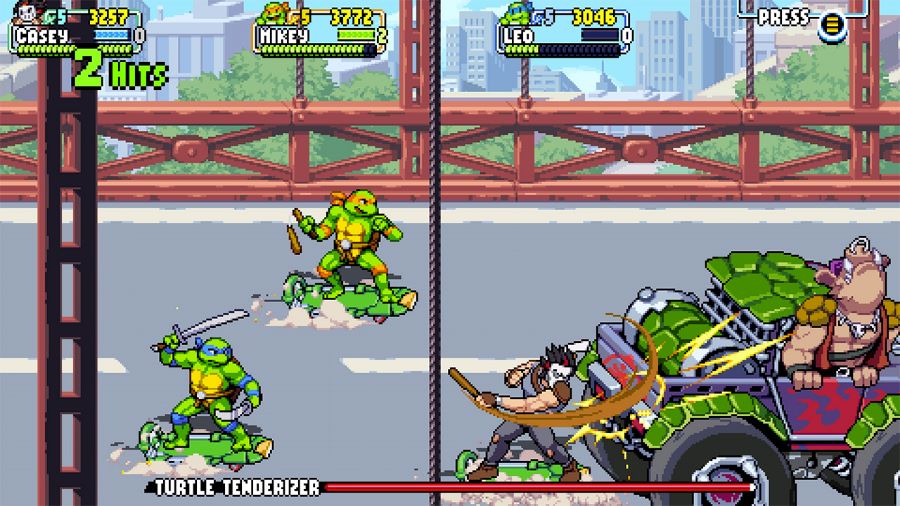 As a fan of beat ’em ups and of the Teenage Mutant Ninja Turtles, I was very much looking forward to playing Teenage Mutant Ninja Turtles: Shredder’s Revenge from the moment it was announced. I’m here to report that this is a gem of a beat ’em up that hits all of its marks, giving us exactly what we need, with a mix of a nostalgia trip and solid gameplay mechanics. The attention to detail is top-notch. Just on the first stage alone, you’ll find a Foot Soldier faking being on a call and taking notes, a group of Foot Soldiers sitting down at desks moving their fingers around as if they were typing, and Foot Soldiers cooking at the kitchen set in Channel 6 – gorgeous animations that are never used again in the game! Add a tubular soundtrack from Tee lopes – along with a song from Wu-Tang Clan’s Ghostface Killah and Raekwon – and you have a game that is easy to recommend for Nintendo’s console. Teenage Mutant Ninja Turtles: Shredder’s Revenge is out on Nintendo Switch with a $24.99 asking price, and it’s worth every penny.

Disclaimer
This Teenage Mutant Ninja Turtles: Shredder’s Revenge review is based on a Nintendo Switch copy provided by Dotemu.

A must-play beat 'em up on Nintendo Switch