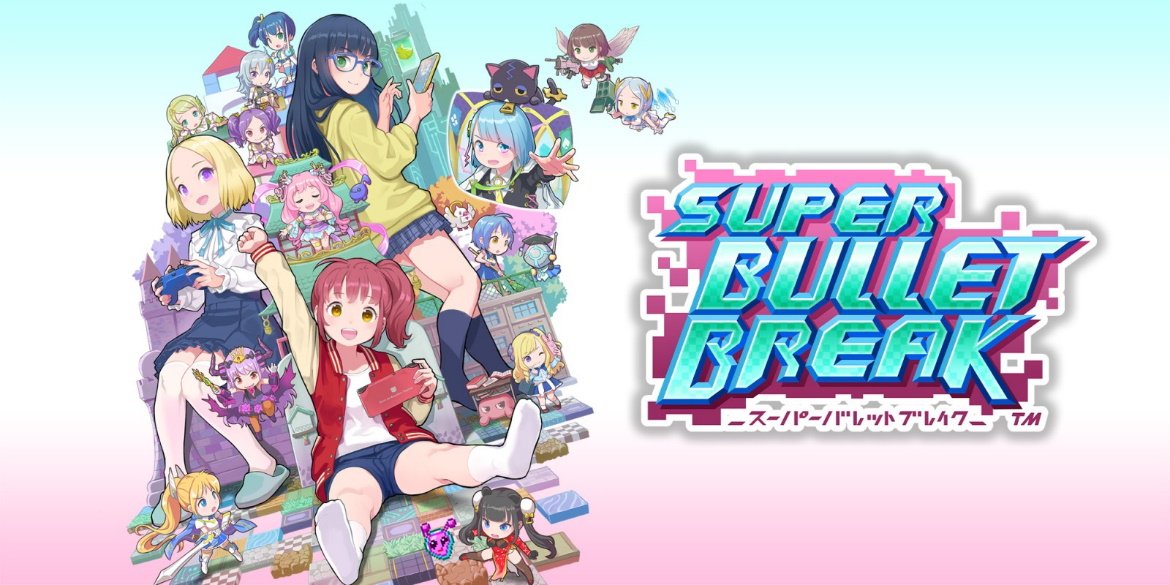 Super Bullet Break from PQube and BeXide is a deckbuilding roguelike with some gacha without microtransactions. In this one, your task will be to rescue online games in a world where online multiplayer games have been taken over by a rogue AI. Your journey begins on a day when all you’re trying to do is get your game on when you notice that all of your games seem to be corrupted. All you can do is check your messages, and it’s then that you get a message from Nayuta, who asks that you try to play through Monochrome Tactics to investigate the reason while these errors are happening… except you won’t be playing Monochrome Tactics.

Instead, Nayuta will have you playing through a retro game, Bullet Break. It seems that Monochrome Tactics and the other games are currently unplayable due to a Singulalady, a boss from Bullet Break. Singulaladies are self-aware AIs that use their minions – known as Buggos – to alter the systems and characters in other games to convert them into an alternate version of Bullet Break while also making the characters in said game self-aware, thus keeping the cycle going. Since all of your games have been altered, you need to find the root problem to fix everything.

You’ll be working alongside Blackcat, the protagonist of Bullet Break, as you collect more Bullets – female characters with a variety of stats and effects – that will act as your cards. Once you’re in the game, you’ll control a cursor with the left analog stick or the D-Pad as you make choices by pressing the A button. These include selecting one of the available nodes – more on these in a bit – as well as picking the Bullet that you’re going to play next to try and defeat the Buggos in your path that will lead up to the fight with a Singulalady.

As you play through each battle, Bullets will be pulled at random from your Magazine, which will contain the Bullets that can be added to your hand. The Bullets that have already been played will move onto the Graveyard, where they will remain until your Magazine is empty and all Bullets are shuffled back into the Magazine to keep the cycle going. Bullets can also be equipped with cartridges, which can influence the game in different ways. Cartridges can be common or legendary and can have active or passive effects. Active ones will only affect the Bullet it’s equipped to, while passive ones will affect everything.

Bullets come in a variety of shapes and sizes, and they will each have different stats, values, and rarity to consider. The rarer a Bullet, the more valuable it will be. Cost is how much energy needs to be spent in order to activate a Bullet. Attack power relates to how much damage a Bullet can deal, while attack range dictates, well, a Bullet’s attack range. And then you have a Bullets special ability, which can help to turn the tide of battle when you’re in trouble! The gacha element comes into play when you obtain new Bullets since you could have two Bullets that seem to be similar but have different values or abilities to consider. 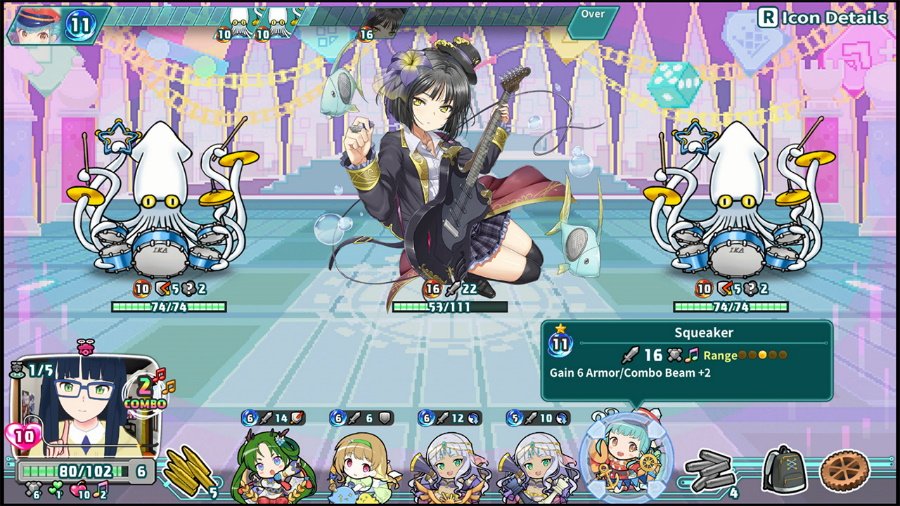 Once you’re ready to take on each of the currently corrupted games, you’ll start to move around an isometric map where there will be a variety of nodes for you to select as you move through each row. While the nodes you can find along the way are random, the last node for a game will always be a boss node, which will send you into a fight against a Singulalady. Defeating Buggos will reward you with Giga, which is the name of the in-game currency, which you can then spend to purchase items, Bullets, or tickets at the shop node. Tickets can then be used to try and earn Bullets of specific types.

The items that you can purchase include a potion that can help to heal 10 HP, a larger potion to heal 30 HP, a prophecy book that can be used to affect an enemy, a piece of Buggo amber to dispel all enemies – except for bosses -, a timecog that can inflict delay on all foes, a special item that will allow you to see the contents of treasures – see below -, a forbidden fruit that inflicts confusion on all foes, a dubious egg that inflicts bound on all enemies, or a very useful anti-armor charm that will inflict break on all of our opponents.

Other nodes you’ll find during your time with Super Bullet Break include battle blocks where you’ll fight against a regular or elite enemy depending on the number of stars for the node and an event block where various events will take place. A treasure block is a very important node since once you reach it, you’ll be rewarded with an item, Giga, or a Bullet. The last node type is the rest block, which will allow you to rest so that you can recover some of your lost HP or redraw cartridges. You can rest for free and recover 30% of your HP or spend 30 Giga for a casual rest session that will help you recover 50% of your max HP. Swapping cartridges might turn a common into a legendary… if you’re extra lucky! 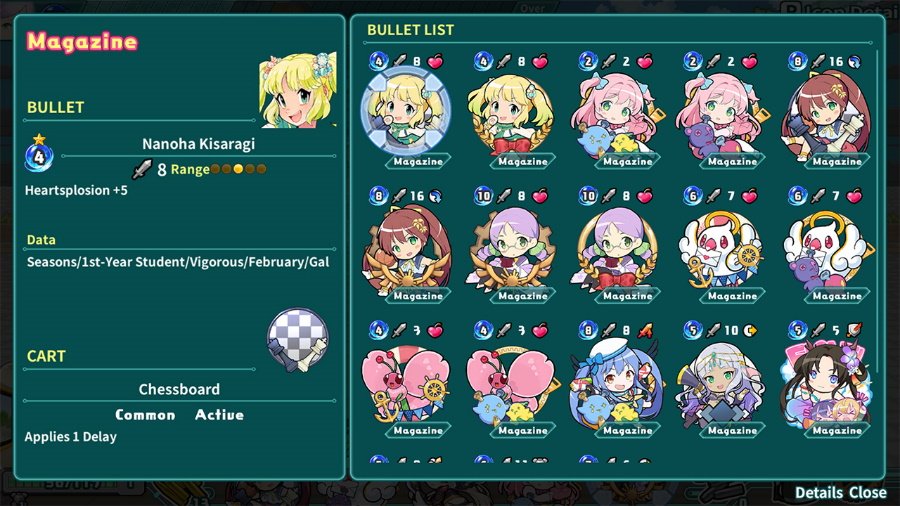 When fighting against enemies, you need to pay attention to their color. For enemies of the same type, blue enemies tend to be weaker than yellow enemies, which are weaker than red enemies. While defeating enemies is your main goal, you can’t go all in with guns blazing and expect to be victorious. You’ll have to plan your strategy just right and make the most of the shield and armor for your main character. Shield can be increased based on the Bullets you play and items you use, and it will prevent some damage from enemies for that turn, dropping to zero at the end of the turn. Armor will also protect you, but it will remain in effect until its value is depleted to zero.

You’ll have access to special abilities as you go deeper and deeper in the game. For example, Heartspolsion is a power available to Bullets from the Seasons of Love game. It will slowly charge up to 100, and once it does, it will explode and slow down enemies by ten while halving the cost of all Seasons of Love characters by half. The combo Beam is available for Bullets from The Aquarythm Deep. Once it’s charged up to 10, a random enemy will be damaged for 30 points! The last one is Drone, which is for Bullets from Phoenix Gunner. Up to 5 drones can be deployed at once, and each one will have a different effect depending on its type.

The effects of drones are activated either at the end of your turn or when they’re destroyed. Attack drones can deal three damage to a random enemy. Shield drones will provide three defense points for your character. Healing drones will restore 2 HP, which can end up saving you from defeat. Oh, and if five drones are already in play and a new drone is activated, then the oldest drone will be destroyed so that it can end up being replaced with the new one. 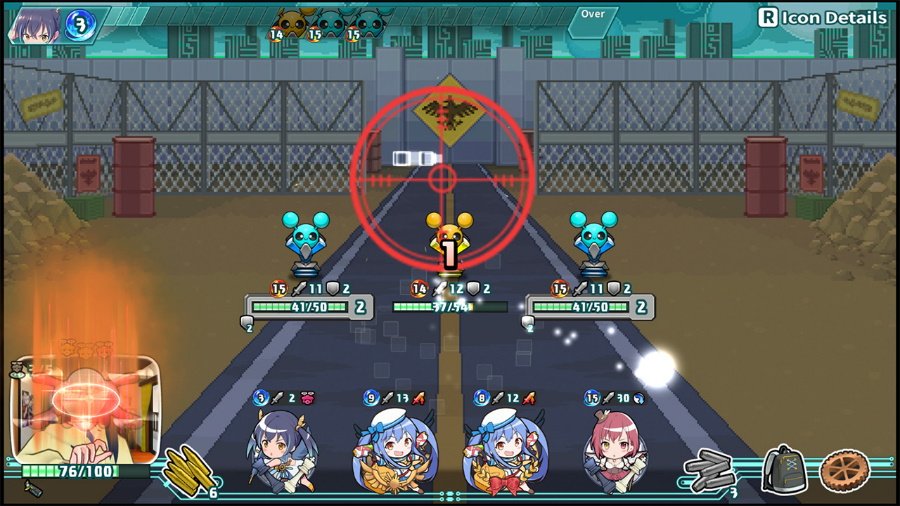 I love me some deckbuilding roguelike games, and Super Bullet Break does some interesting things within the genre – such as adding some gacha elements into the mix while removing microtransactions and giving each of your cards – a.k.a. Bullets – distinct personalities and traits. Sure, there’s a bit of fan service in some of the Bullet designs, but hopefully that doesn’t keep you from giving this fun experience a go. Super Bullet Break is out on Nintendo Switch with a $24.99 asking price, and it offers a ton of replay value.

Disclaimer
This Super Bullet Break review is based on a Nintendo Switch copy provided by PQube.

Solid deck-building roguelike gacha experience that is free of microtransactions