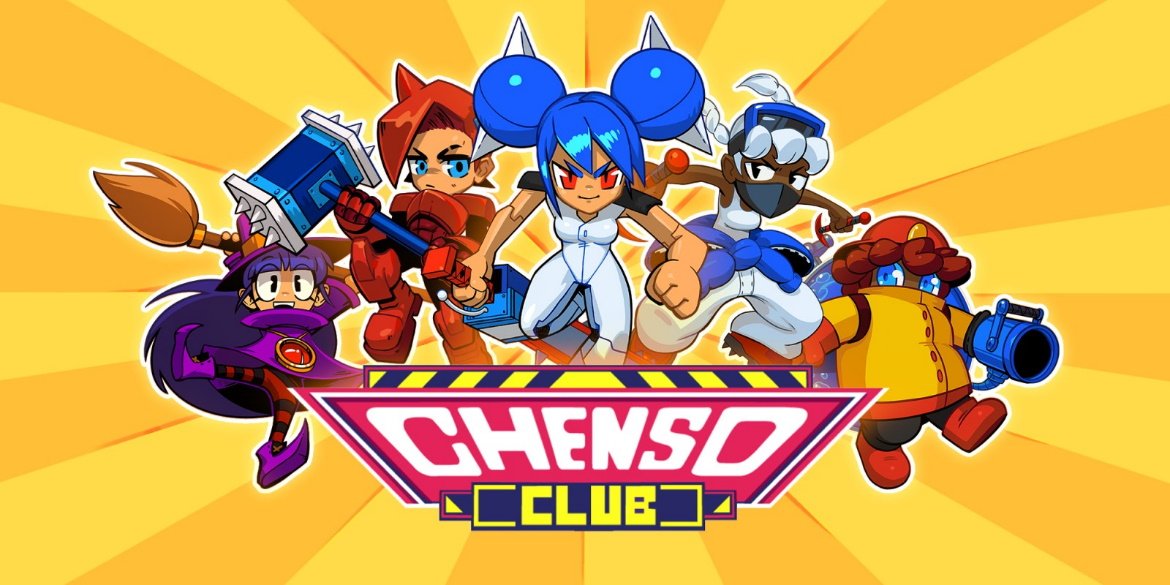 Chenso Club from Curve Digital and Pixadome will have you playing as a group of heroines out to save the world from an alien invasion. Check our Chenso Club review!

Chenso Club from Curve Digital and Pixadome will have you playing as a group of heroines out to save the world from an alien invasion. It’s a game with some roguelike elements, so you’ll be making some progress with every run, unlocking new stages and characters to play as. You’ll first be playing as Blue, a cyborg that was created to protect humanity. The story is presented by way of comic book-style panels. This is how you’ll learn about the alien invasion and how your character boots up and sprints into action after an alien teleports into her containment tube and dies, after which she absorbs its energy. 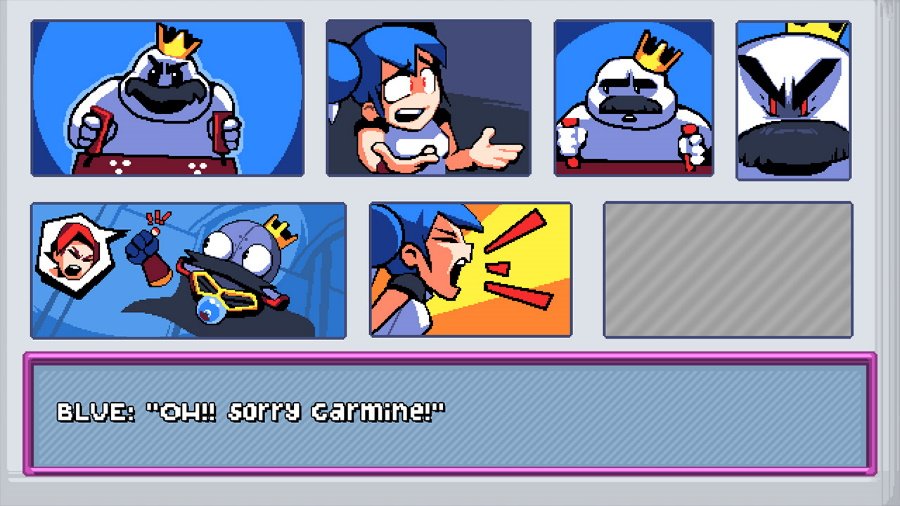 The game can be played in one of four difficulty settings: Story, Casual, Standard, and Insane. Story is for gamers who don’t want to face a big challenge and want to enjoy the story. Casual bumps things up a bit, but without overwhelming gamers. Standard offers an experience balanced for those who are familiar with action platformers. As for Insane, it’s reserved for gamers who like a hearty challenge, almost to the point of tormenting themselves.

Soon after booting up, you will go through a short tutorial that will teach you all of the basics. You’ll move around with the left analog stick or the D-Pad, jumping the X button. You can dash with the A button on the ground or while up in the air. Your character can dash in all four directions and will be invincible while doing so. To attack, press the Y button, which can allow you to pull off a swift combo. The X button will be for special attacks, combined with pressing up or down as needed. They’re slower than light attacks but will deal more damage. 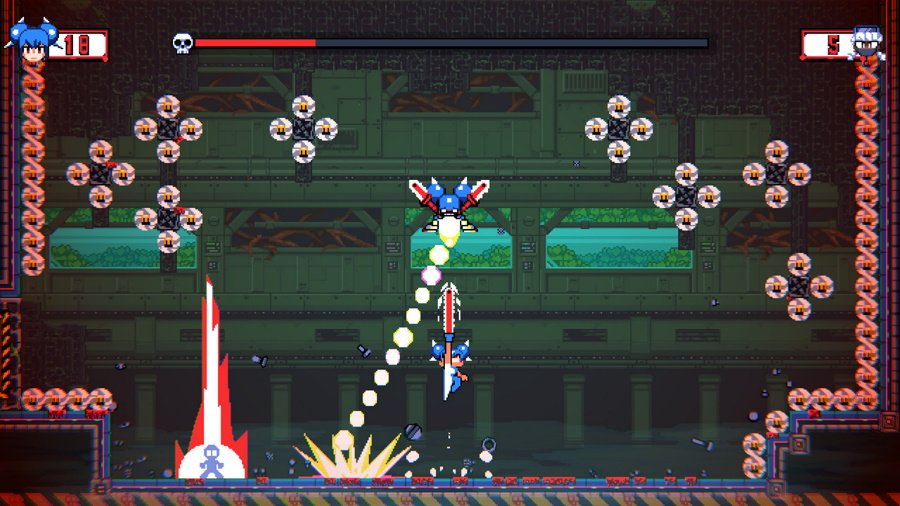 You’ll unlock other heroines as you play. Each one will have a different weapon for attacks as well as different values for their speed, defense, and attack stats. Blue is a chainsaw-wielding android that is the most balanced of the bunch. Carmine wields a huge hammer, dealing a ton of damage while also wearing heavy armor, but she’s the slowest of the bunch. As for the rest? You’ll have to play the game to find out!

When you run into the shop, you can purchase some stuff you boost your odds of victory. The twist? They will only take blood! That’s right, you’ll have to pay with some of your health, which means that if you go a bit crazy and buy one too many things, you could end up close to death! And what CAN you buy at the shop? You could get things such as a booster for your movement and dash speed, a shield to protect you from taking damage once, a shockwave to push enemies away, or a remote-controlled boomerang to attack opponents. If you have a usable item, you’ll be able to activate it with the ZR button. The good news is that your max hit points won’t change, so you’ll be able to recover health by defeating enemies or using items. 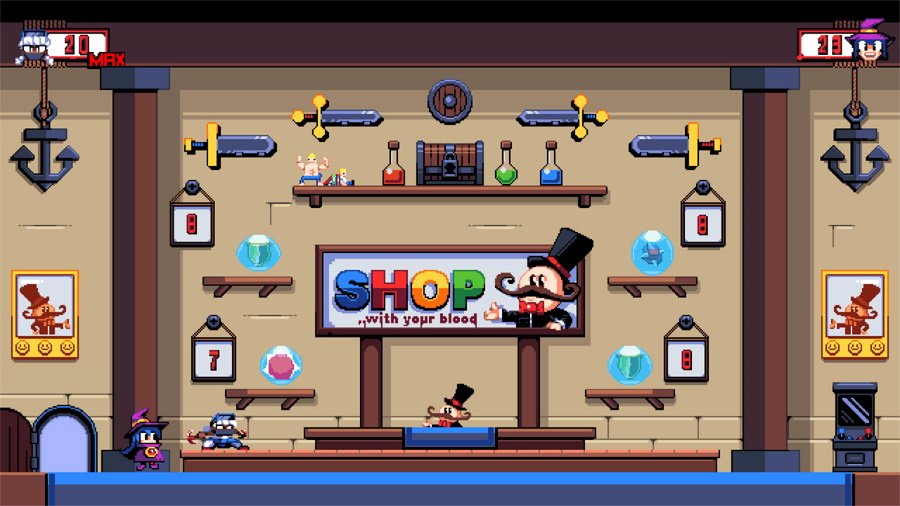 As you progress through each area, defeating enemies and bosses, you’ll gain Chirp followers. Gain enough followers, and you’ll level up. By leveling up, you’ll gain Chirp tokens, which you can then trade with your followers to unlock new boosts and items that will start to show up in the game and in the shop for you to purchase. Maybe you want to unlock a revive item that will bring you back to life with half of your total hit points? Or perhaps adding a discount coupon would make more sense since it lowers all prices at the shop.

If you find the Cool Bus in one of the rooms, you better jump in! Doing so will send you into a special stage where you can collect blood to unlock special rewards. You might need to collect blood during an autoscrolling segment or defeat enemies to use their blood to fill up a container. The more blood you collect, the more treasure chests you’ll get to open once the mini-game is over so that you can carry on with your adventure. By defeating bosses, you’ll get to pick from different power-ups that can boost a character’s overall health or increase its attack power. These stat boosts will remain in effect for the rest of your run until you’re defeated. 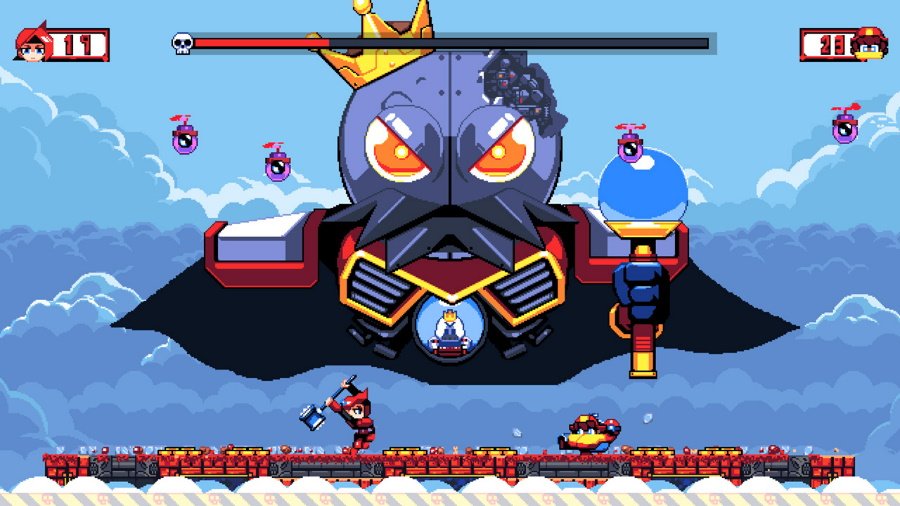 Chenso Club is a fun 2D roguelike in which you’ll go from room to room as one of the available heroines in a bid to save the world from an alien invasion. Each one will have different stats and light and heavy attacks, which change your approach as you work on completing each stage, adding new followers as you add to your Chipper account. Chenso Club is out on Nintendo Switch with a $14.99 asking price.

Disclaimer
This Chenso Club review is based on a Nintendo Switch copy provided by Curve Digital.

Can you save the world?