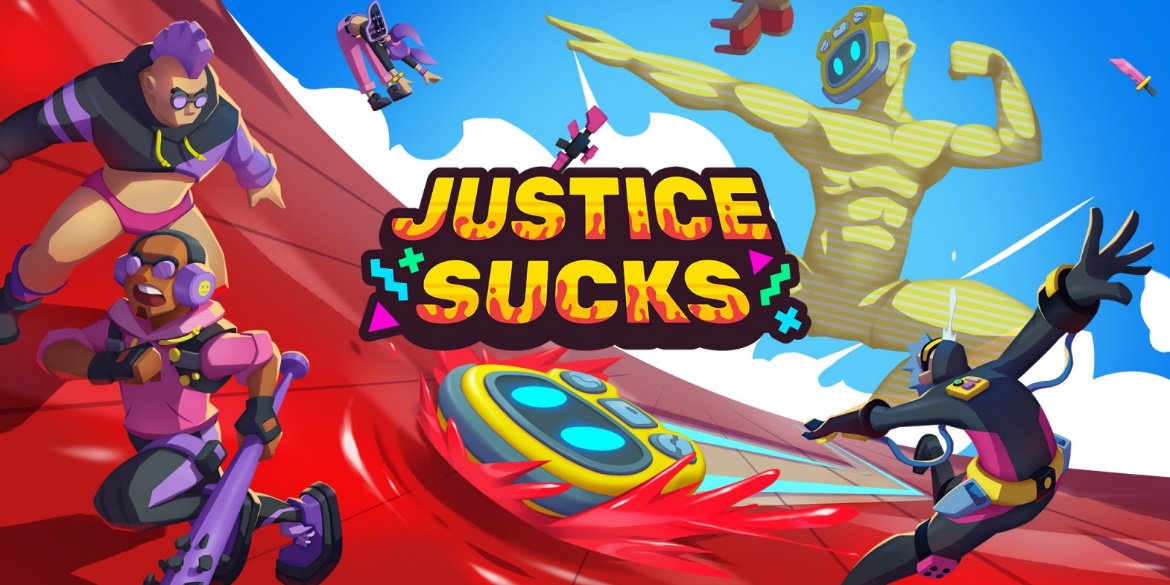 JUSTICE SUCKS from tinyBuild and Samurai Punk is a tactical vacuum action experience on Nintendo Switch. Learn more in our JUSTICE SUCKS review!

JUSTICE SUCKS from tinyBuild and Samurai Punk is a tactical vacuum action experience on Nintendo Switch. You’ll be playing as a vacuum named Dusty McClean – because, of course, that’s its name. One night, after the whole McClean family goes out, Dusty hears someone breaking into the house. While Dusty is not a proper surveillance bot, it decides to investigate to see what is going on, and thanks to its innate skills as a cleaning bot, it manages to secure the location and defeats the burglars.

After the CEO learns about what Dusty is doing, he sends the FamilyCorp Warranty Squad is sent to get Dusty since it’s not a proper surveillance bot, and if more people find out that regular vacuums can also protect homes, FamilyCorp’s sales will plummet! Unfortunately, this means that FamilyCorp also has to kidnap Dusty’s family so that they don’t speak with anyone about the aforementioned events. Now Dusty must not only protect each location but also find a way to save its family before it’s too late! While you’ll start off by protecting the McClean house, you’ll soon find yourself inside of the bizarre TV dimension, so you’ll also have to find a way back into the real world! 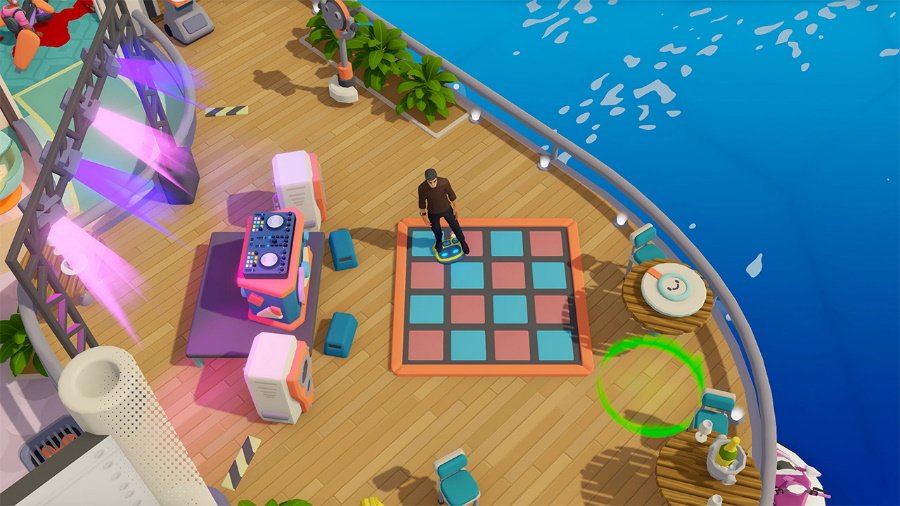 Based on your overall performance, you’ll be given a final rank at the end of a stage. You can increase this depending on your overall cleanliness grade once you’ve disposed of the bodies and cleaned up their footprints and blood, the damage dealt and how many objects you used to damage and defeat your opponents, how long it took you to defeat enemies if you were damaged or not during the whole thing, and if you managed to keep all valuables safe. If someone grabs an item, you’ll still have a final shot at damaging them so that they drop it and you can recover it, but you’ll be left wide open as you press and hold down the Y button to recover an item.

Oh, and Dusty will be able to get the help of Sexy McClean, a manifestation of his fighting spirit. You’ll first meet him while in the Void, the world between worlds and life and death, where Dusty is sent to after being brutally attacked by the FamilyCorp Warranty Squad. You’ll have to always remember the basics of SASS – Sucking And Shooting Skillz. After sucking up objects – of which you can store up to three at any given time – you can then use them as ammo and shoot them out with the ZR button. The longer you hold down the ZR button, the further you’ll shoot out an object!

You’ll be playing this one from an isometric perspective and will move around with the left analog stick, dashing with the A button. Once charged, you can use an ability with the D-Pad. When in Normal Mode, you can suck by pressing and holding down the ZL button and shooting while holding down the ZR button to aim, and then unleash your attack. You can interact with the Y button and honk with the R button. Honking is an important ability since the noise from the honk can be used to attract people to your location. Since JUSTICE SUCKS is a sneaking game, you need to be careful because enemies can see and hear you! As long as you find a spot to hide or break away from their line of sight, you should be good to go. And if you need to check where you’re at, just press the X button to open up your map. 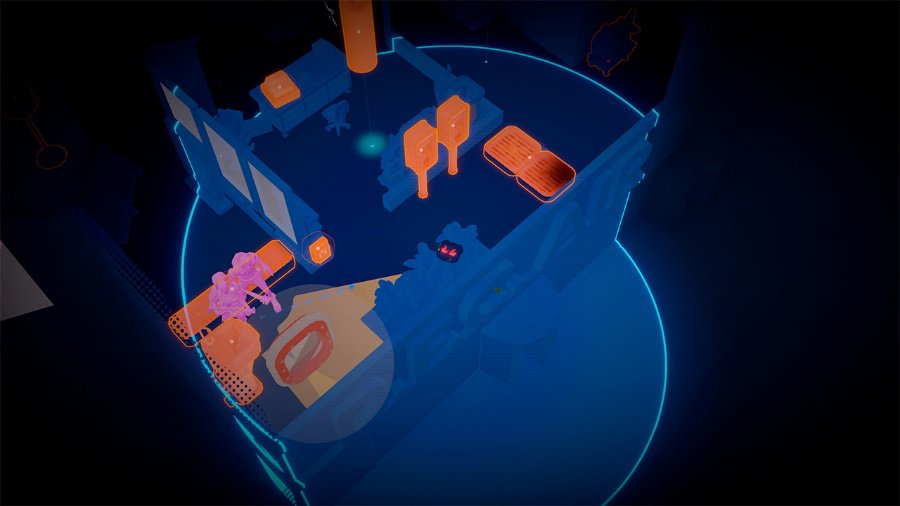 If you press the L button, then the vacuum will switch things up and go into Hack Mode. While this is active, you will aim with the right analog stick, hacking a trap with the ZR button or pinging a trap with the R button. Pinging a trap will have a similar effect to honking when you’re not in Hack Mode, and it can be used to your advantage to lure enemies towards specific traps so that you can have a better chance of moving undetected. You can also attack with the Y button and block with the ZL button.

Once you’re done protecting the area and have defeated an enemy, you’ll need to take care of the big mess they left behind! You’ll have to suck up the body, grinding up to leave no trace behind. Be sure to do this when there aren’t other enemies around since you’ll be making a lot of noise and will be left pretty vulnerable to attacks. You’ll also have to clean up any blood that might have spilled out of an enemy, which is bound to happen when you, say, drop a spinning ceiling fan on top of them.

Blood is very important, and so is meat, since it can be used to activate special abilities, as well as to help Dusty recover from any damage received. Dusty’s health is represented by the batteries at the bottom of the screen. By cleaning up blood and sucking up the bodies of your defeated enemies, Dusty will juice up a bit, which will help to refill any missing health batteries. As for abilities, they will all use up some blood power to be activated, and they will have three power levels. 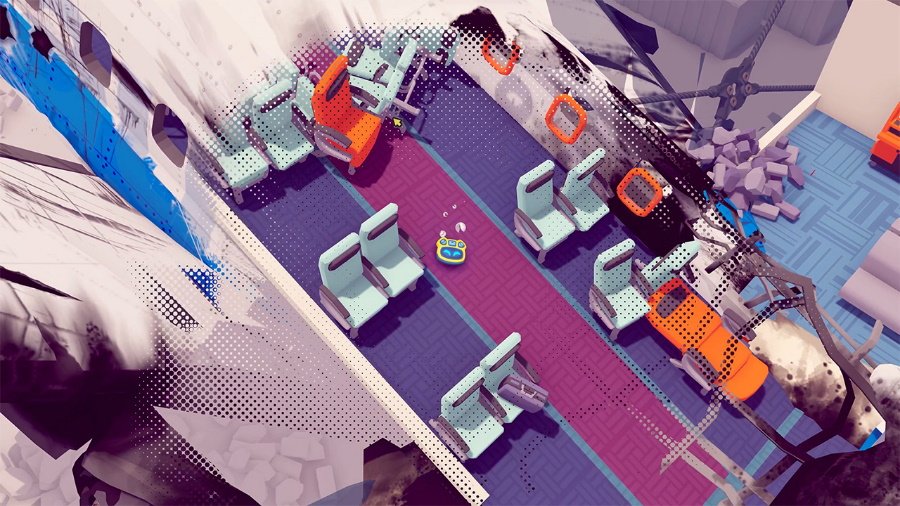 As you can imagine, the more powerful an ability, the more blood it will consume. Activate abilities with the D-Pad, aim, and unleash! You can equip up to three abilities for each mission, and you’ll need to balance things out so that you have abilities from each of the tiers, or else you’ll need to wait until much later in the game to use them after you’ve obtained enough blood by cleaning up the mess left behind by the meat bags, by sucking them in and processing their meat, as well as by sucking up the human pieces left behind after you suck them in.

What loadout should you use during your time with JUSTICE SUCKS? There are many potential combinations, but the good news is that early on, you’ll be able to equip two in particular that can make a big difference: Ghost in the Machine and Mine Drop. Ghost in the Machine allows you to become temporarily invisible and move through enemies, while Mine Drop, which makes it possible to drop a proximity mine that will explode when an enemy is within range – a great option for when you’re being chased by one or more enemies!

As you progress through the game, you’ll unlock some perks that can be put to good use, helping you get the jump on your opponents. You’ll start with just the one unlocked perk for Robot Vision, which will allow you to preview what will happen when a trap is hacked. You can equip up to three perks, and additional ones include, for example, Powered Up, which will give dusty some blood at the start of each mission, or Escape Artist, which will make Dusty temporarily turn invisible after taking damage. Dusty can also level up by completing more and more missions, and this will allow you to assign a boost point to its battery (health) or energy. 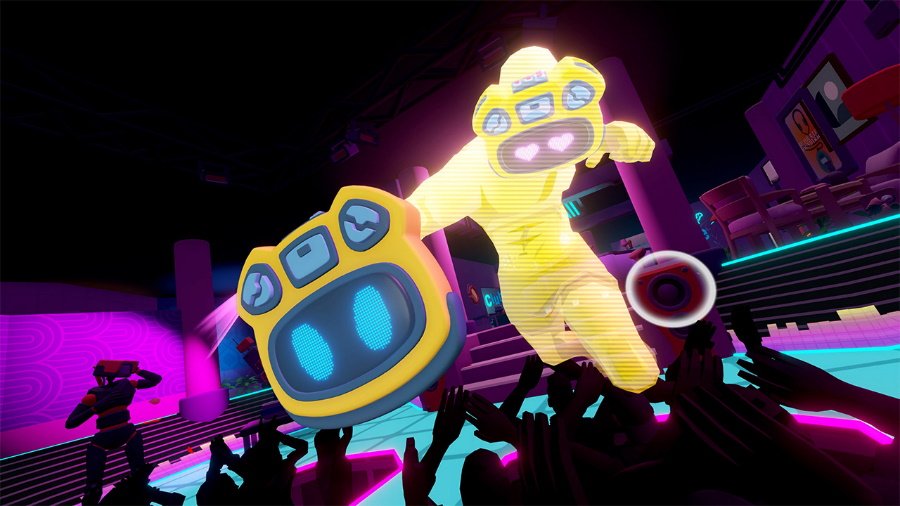 I liked what I saw in the JUSTICE SUCKS trailer, but I was not prepared for how fun the whole thing was going to be! There’s plenty to do in this one, and you’ll unlock new locations as you complete the different mission types in each area of the quirky TV dimension. You can get creative with traps in order to deal additional damage so that you can stay one step ahead of enemies. If you, say, drop some water on the floor, lure an enemy to that spot, and then hack a speaker so that it short circuits… well, you can probably guess what happens next! It’s a crazy story and premise, and things do get a bit violent, so this won’t be for everyone. JUSTICE SUCKS is out on Nintendo Switch with a $19.99 asking price.

Disclaimer
This JUSTICE SUCKS review is based on a Nintendo Switch copy provided by tinyBuild. 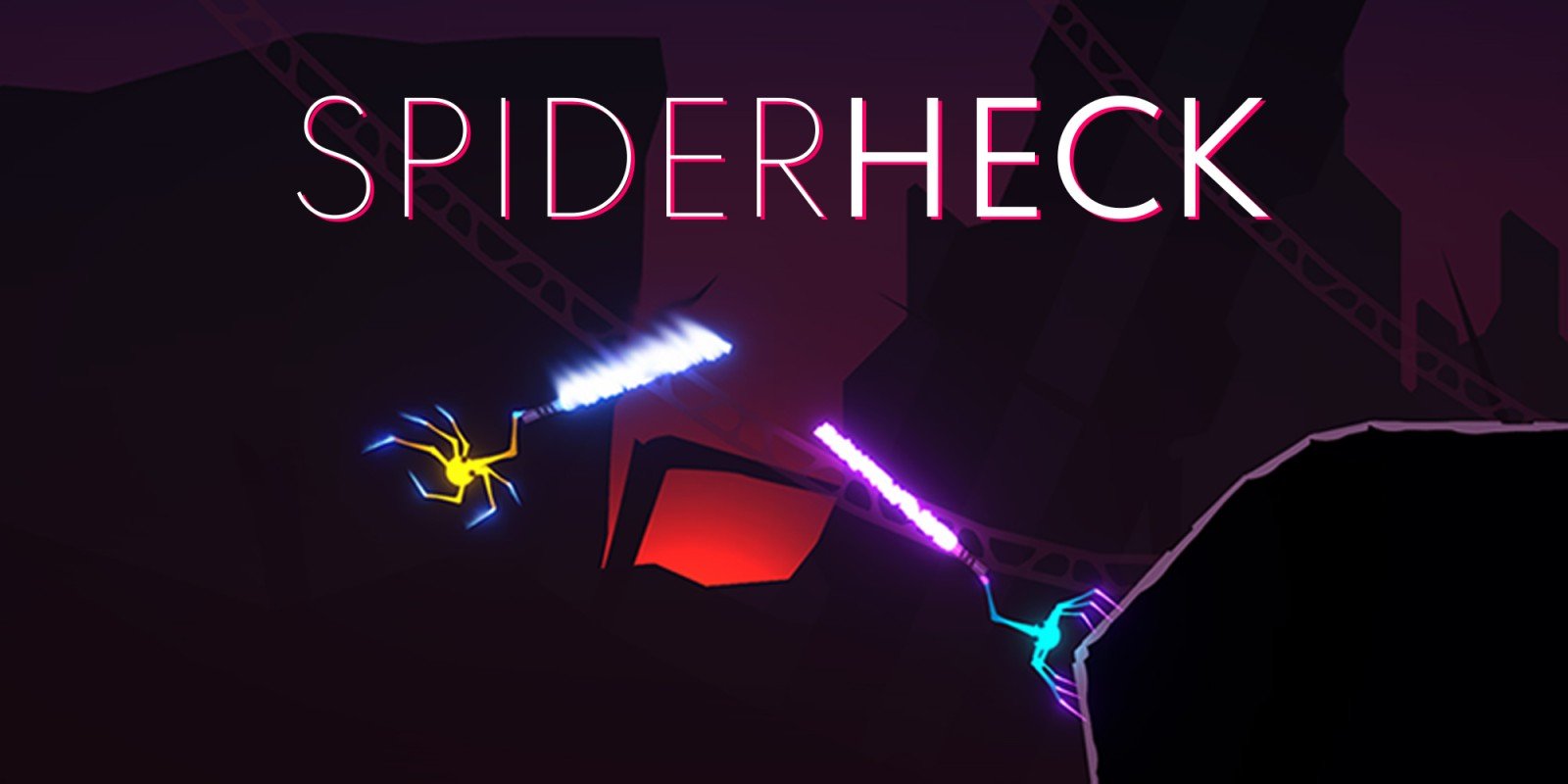