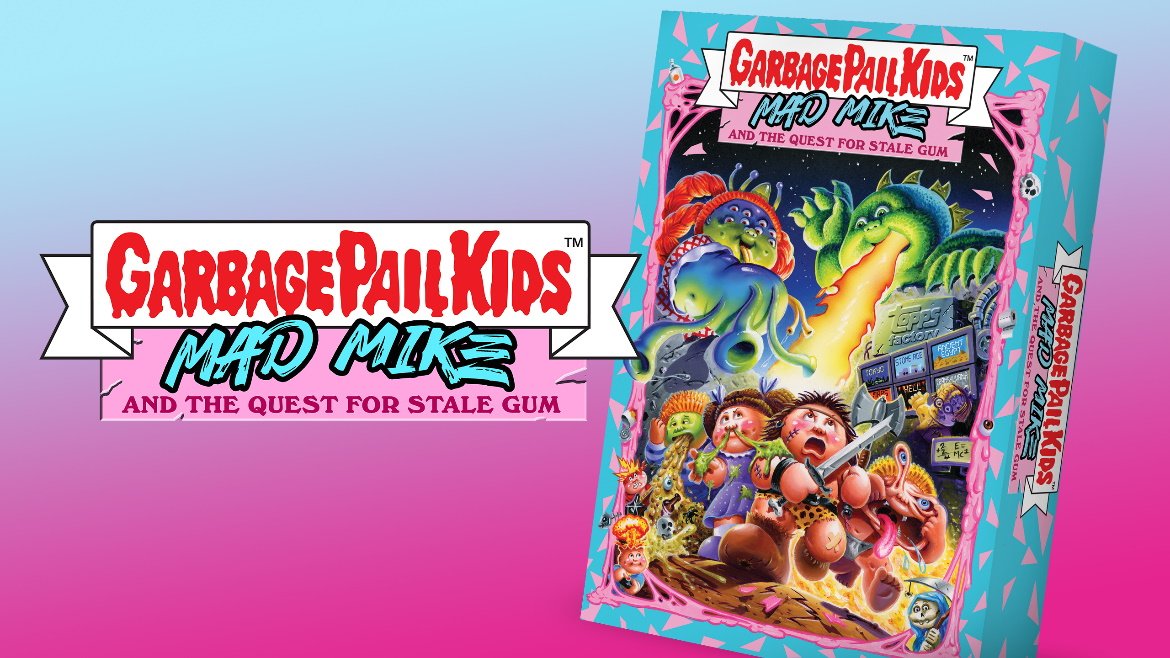 Garbage Pail Kids: Mad Mike & the Quest for Stale Gum from iam8bit, Retrotainment, Digital Eclipse, and Topps is an all-new lost game for the NES. It’s a trip back to the 1980s when trading cards and the Gargabe Pail Kids were all the rage. Something else that was extremely popular is the aforementioned Nintendo Entertainment System, which is why it’s certainly odd that the Garbage Pail Kids never got a video game on it… until now! It’s 2022, and that makes it the perfect time for a new NES-style experience that celebrates them. 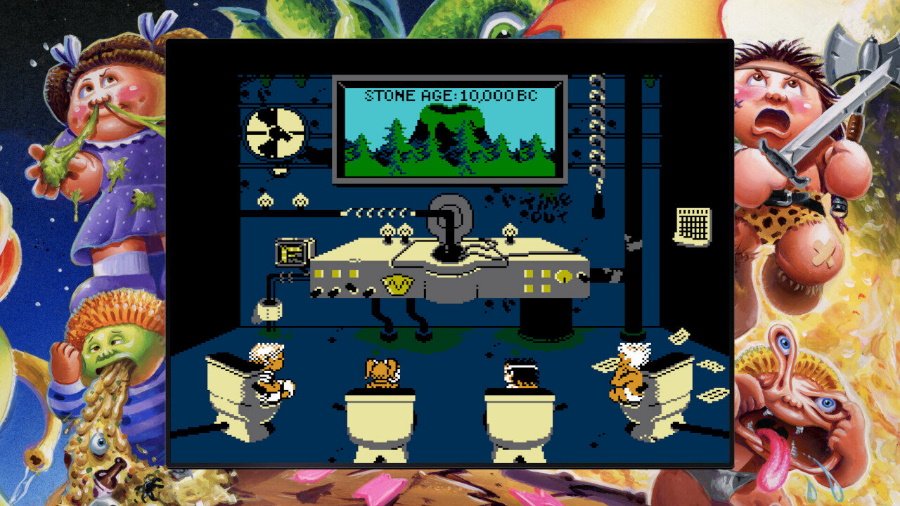 For this retrotastic game, you’ll be taking on six old-school levels that are true to the Garbage Pail Kids experience. You can select from one of four different characters: the mighty Mad Mike, bizarre and melty Patty Putty, goober-central Leaky Linday, and hungry-hippo Luke Puke. There are also some bonus stages where you’ll get to play as fly-on-the-wall Betty in all of her glory. You can play in one of four difficulty settings: Tourist, Easy, Normal, and Hard. Tourist offers unlimited health. Easy you start with eight health total. In Normal, each of your characters will have four health. As for Hard, there will only be one hit point, so a single hit and you’re done!

You’ll control your current character with the left analog stick or the D-Pad, jumping with the X button and attacking with the Circle button. That’s right, two buttons are all that is needed, just like we used to do things back during the Nintendo Entertainment System days. Press the L1 button, and you can use a handy rewind function that will allow you to fix any mistakes you make along the way. Press the R1 button, and you can save your progress so that you can carry on right from where you left off. 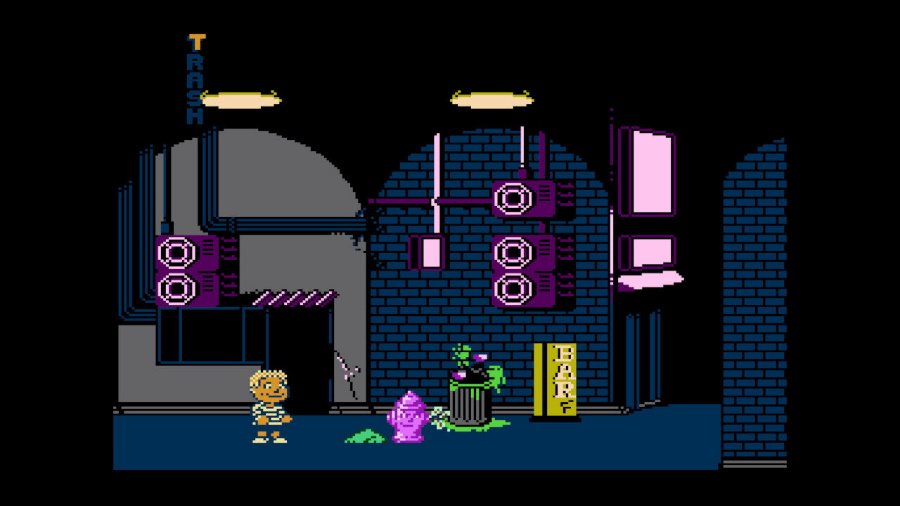 The game has a trading system in place, by which you can offer your Garbage Pail Kids cards and trade them for those that are carried by the different NPCs you’ll meet. As you defeat enemies, you might end up finding a new card for your collection. Some cards are better than others since they will not only be there to fill up your collection, but they also can be used to, say, bring back a character that has run out of health, or switch into another character if needed.

And along with the main game, there are also some bonus features to consider! This one has three special sections: Movies, Music, and Gallery. In Movies, you can check out Mad Mike Fury Load, a short with all the Garbage Pail Kids pizzazz. There’s also a video about the true story of the lost video game. The Music section is where you can listen to the 11 songs that are part of the game’s soundtrack. And then we have the Gallery, which is the most packed of all three sections! While there, you can check out 48 side-by-side comparisons of the original art for each Garbage Pail Kids character and how each one is presented in the game. On top of this, there’s a section for 21 images of concept art for the game, a digital NES-type old-school manual, and full maps for each level. 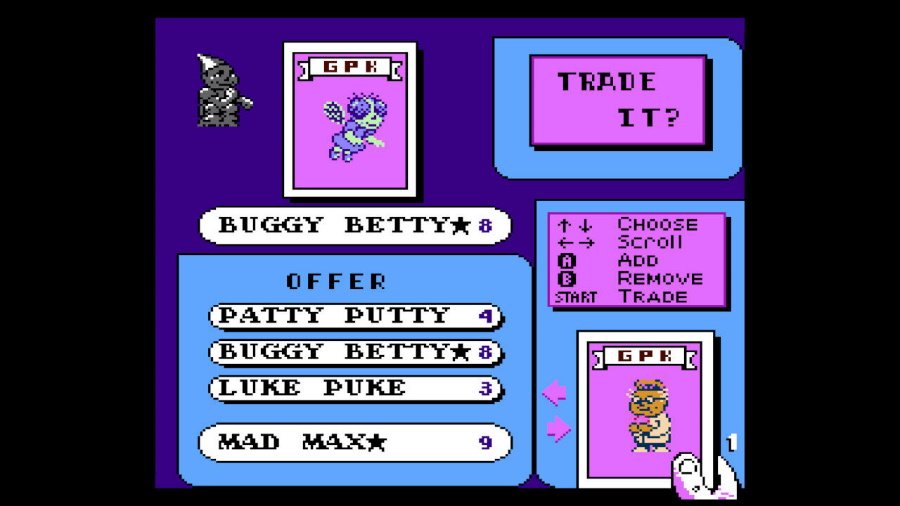 To go along with the old-school vibes of the game, you can customize your experience with Garbage Pail Kids: Mad Mike & the Quest for Stale Gum. The game’s default presentation has a standard-sized screen in the middle, surrounded by a colorful border showing the four characters you’ll control. There’s the option of changing to a very 1980s Trapper Keeper-style theme. And then there’s the one that places a retro TV border around the screen. You can even remove the border! There are filters for the screen as well, and you can change it to an old TV, a monitor, or an LCD – or, again, just have no filter at all. You can even remove the NES flicker and change the screen size to full or stretch it to fit your 16:9 display.

Trophy-wise, this PlayStation 4 game has a full trophy list with a Platinum trophy for you to work on. The list includes 7 Bronze trophies, 2 Silver trophies, and 9 Gold trophies. To unlock all of them, you’ll have to all six levels, beat the game and see the ending, use an item card for the first time, trade cards for the first time, talk to five different NPCs, play through the whole game in one sitting, get a game over by falling into a pit, get a game over from dying at a boss fight, get a game over from death to a common enemy, fall into a pit while being invincible, explore all of the Egypt level, complete one Buggy Betty bonus stage, and completing all of the Buggy Betty bonus stages. 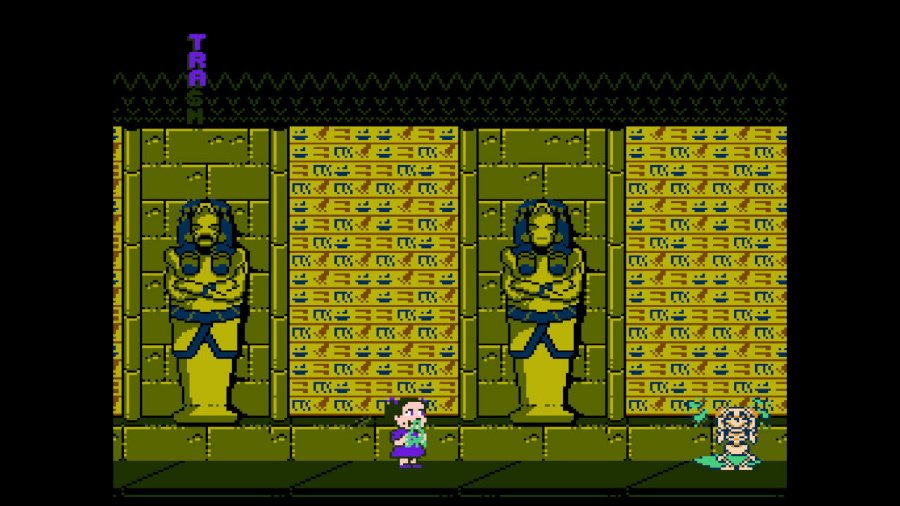 Garbage Pail Kids: Mad Mike & the Quest for Stale Gum is a retrotastic 2D action game that pays homage to the classic era of the beloved Nintendo Entertainment System – a.k.a. the NES. There are six levels to explore as four different characters, with an extra character that can also be used in bonus stages. The game is available on PlayStation 4 at a $9.99 asking price. You can also pre-order a physical NES copy of the game from iam8bit. It’s a limited edition, so if you want to secure a copy, you should pre-order one right now! What will you get with your purchase? As you can see from the image below, you will receive the following:

Plus, It Comes in a Retro Style Box

**Cartridge colorways are randomly inserted into sealed, unmarked boxes. The edition is comprised of: Mad Mike Blue and ultra limited Stale Gum Pink (1 in 8 odds for the ultra limited cartridge). We cannot guarantee which version you will receive. It truly is completely random, even to iam8bit staff.

Disclaimer
This Garbage Pail Kids: Mad Mike & the Quest for Stale Gum review is based on a PlayStation 4 copy provided by iam8bit.