To begin with, let me preface this by saying that I am a true die hard fan of First person shooters, or anything where i can take out my angst on 12 year-olds without a court appearance. I’ve been a fan of Mr. Drake since always and admire what Naughty Dog has brought to table as far as innovation and unprecedented gameplay.

That being said, my overall reaction to Uncharted free to play was excitement and anticipation, now the arena was to be flooded with new players and combined with an interactive gameplay style that is unmatched in the FPS world. Having spent a majority of my time with the COD series and more recently the BF series, I was hungry for something different, and Uncharted offered the competition and mash up style of COD but with the potential for depth that the BF series offered. I eagerly downloaded the free content and waited as the updates installed and the game began to load.

END_OF_DOCUMENT_TOKEN_TO_BE_REPLACED

I feel like I can share anything with you, loyal reader. Now, we’re not talking “hey, can I borrow your rare Beastie Boys “Pass The Mic” single EP vinyl?” It’s more of a “can I borrow a cup of sugar, neighbor?” pal. It could be that we’re a different kind of pal? Maybe we’re pals on a different level? Is there an honesty percentage to our pal level, and furthermore: what level is it and what level does it cap out at? All good, solid questions. That’s what I like about you, though. You have lots of good questions. Honesty is the first one and only I’d like to address, mainly because of time restraints and the fact that I’m writing this review over lunch and it’s getting cold.

END_OF_DOCUMENT_TOKEN_TO_BE_REPLACED

If you haven’t seen the new trailer for Bioshock Infinite, the wait will be worth it. Yowza.

“Check out this all-new BioShock Infinite gameplay voted for by the Irrational Facebook community! See more of the streets (and skies) of Columbia, … END_OF_DOCUMENT_TOKEN_TO_BE_REPLACED

Worst lead-in ever? Probably. Taken quite some time for your old pal to write another review? Most likely.

While you’re tapping your foot for an apology that you’ll never get, and one I’m not ready to give, let me tell you about this gripping game – maybe you’ve heard of it? It’s called Borderlands 2. Made by the fine folks over at Gearbox, and by fine – I mean completely awesome.

It’s where this game shines.

END_OF_DOCUMENT_TOKEN_TO_BE_REPLACED

People come and people go. Fads change and things remain the same. The earth and its inhabitants are in constant ying and yang with each other. The way you would think of the boulder chasing after Indiana Jones in the first movie and we come out the other side with cobwebs on us and Belloq is right there to take our valuable treasure away from us. And then he sends his village bandits after you as you make a break for it down a lush and rolling green landscape, as you yell at some random dude who is lollygagging on starting your getaway plane. Hang onto a pontoon of a plane, dodge some poisonous darts and throw snakes into the mix and you kind of get what I’m driving at.

The reason why I’m writing this, true believer, is to inform you that one of your very own (that being me) will be driving the arduous trip from my cozy bay area palatial estate down to the city of angels to cover the mecca of every gamers dreams: E3. How do I feel about this? I’m ready and I’ve put in the time to get there as media and score the E3 swag you guys want. I’ll ask those hard hitting questions for the interviews you have come to expect from me from my many live blogs hosted right here on the blog itself. The tomfoolery and of course the unpredictable hijinx that goes hand in hand and also makes for an interesting read – and that’s what it really boils down to, right?

END_OF_DOCUMENT_TOKEN_TO_BE_REPLACED 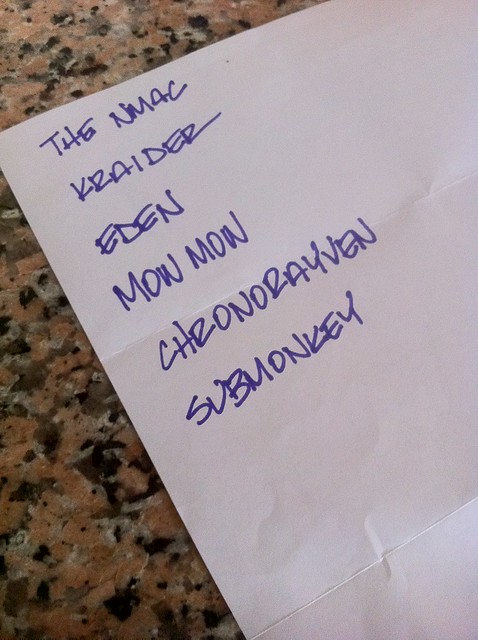 Sorry about the wait folks. I’ve kind of been scrambling and coordinating for coverage on some big events like GDC that’s coming up. That way I can score you fine people more free stuff and even tastier interviews, featuring yours truly of course. This game is fantastic and I encourage everyone to at least check it out – if you have the means.

END_OF_DOCUMENT_TOKEN_TO_BE_REPLACED

Today I got a look at two things I have yet to get my greasy gamer paws on: the Playstation Vita and the Vita game “Tales From Space: Mutant Blobs Attack!”. While the Vita I immediately reached for was only a dev unit, it was rather weighty and much larger than its predecessors. That’s not the focus of this article though, Mutant Blobs is what I’m going to talk about. And talk about it we shall; in great detail.

END_OF_DOCUMENT_TOKEN_TO_BE_REPLACED

I’ve always been a fan of Batman.

Except when George Clooney donned the Bat suit and pretty much spit in the face of every Batman fan with his performance. And as far as the movie problems – minus Val Kilmer & Clooney – has been fixed with Mr. Nolan behind the Hollywood camera lens goes. I can honestly say that I have not looked forward to any Batman movie related release like I have for this final chapter of the series. Nolan will be sorely missed at the helm for what he has done for the Batman universe.

Now with that being said: excitement carries over when it comes to any relatable franchise. Whether it’s your favorite movie, food, sport – favorite anything, really. In this case, Batman being my favorite thing. So I scour the interwebs for my favorite thing, any news at all. Anything to quell my insatiable appetite for all things Batman.

I have found Gotham City Impostors.