Tekken Tag Tournament 2 Hitting A Console Near You Next Year

Currently available in Arcade form across Japan and undergoing playtests in parts of North America, Namco Bandai has announced a release date for Tekken Tag Tournament 2 for home consoles. The fighter is expected to debut sometime during “Holiday” 2012. Which likely means next November or December. Along with the date Namco also released a spiffy new trailer for the game.
END_OF_DOCUMENT_TOKEN_TO_BE_REPLACED

The patch previously released in Japan is finally here for you hardcore RPG fans. Patch 1.05 will offer tons of fixes addressing multiple balancing and technical issues.

END_OF_DOCUMENT_TOKEN_TO_BE_REPLACED

I do apologize for the delay of this review. Many of you know why it’s been delayed, but I was out on ‘medical leave’ and couldn’t even manage to sit and play a game. So, with that out of the way, I gotta get this review out for you. You might notice gratuitous use of the word “intense,” but I don’t have any better words to describe the use in the context of this review.

Let me start by saying I’ve been a fan of the Ace Combat franchise since the games first released on the PlayStation. Though I never owned any until the PS2 titles came out, I did spend a bit of time playing them. Ace Combat was the first title I’ve played that introduced me to flight combat games, and they’ve always been very well done.

But this addition to the franchise is, more or less, a reboot of the series. Gone are the imaginary worlds you played on. Gone are the boss battles. Gone are the super-fortresses at the end of the game. Does this hurt the game at all?

END_OF_DOCUMENT_TOKEN_TO_BE_REPLACED

Dark Souls is one of the best games I’ve ever played. I have no doubt about that. Being a huge Demon’s Souls fan, this has been on my radar ever since it first was announced and I honestly can say this is one of the few games that lived up to its own hype. After all, I’ve bought 3 copies of it and I still don’t think I wasted money. One of those is the Collectors Edition I got from pre-ordering the game, amazing content for no additional costs (all publishers should follow this example), the second I’ve bought because I’m only going to get the first late in December and I simply needed to play the game before that, however that one got terribly delayed, so I went on and bought another one.

Long story short, I was dangerously excited and had extremely high expectations for the game. Fortunately, my expectations were surpassed and my excitement only got bigger. I’ve spent an astonishing 60 hours with the game over just one week and I didn’t skip work once! But enough about this rambling and, like Monty Python and the Holy Grail would say “GET ON WITH IT!”. Oh, and I’ll be making this review newbie friendly, so you’re welcome if you’ve never played Demon’s Souls or Dark Souls.

END_OF_DOCUMENT_TOKEN_TO_BE_REPLACED 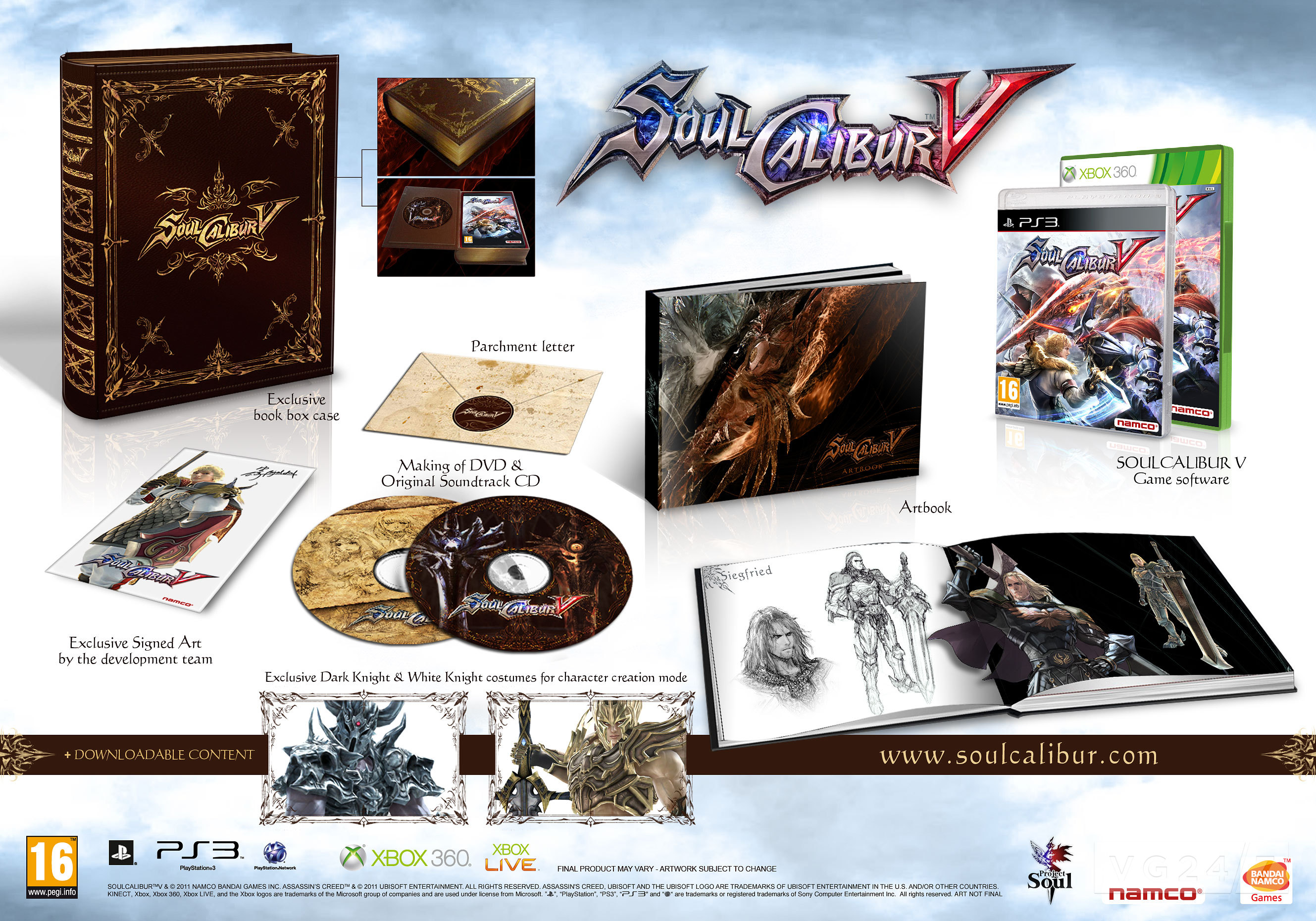 What a week it was for Soul Calibur Fans. First, we had FooBear’s Live Blog coverage from the Soul Calibur V Event in San Francisco, then Sakinah confirmed Ezio as a playable guest character. Here is the first picture of Soul Calibur V Collectors Edition available Jan 31st and Feb 3rd, 2012 in North America and Europe respectively.
END_OF_DOCUMENT_TOKEN_TO_BE_REPLACED

Namco has confirmed that Assassin’s Creed 2 protagonist, Ezio Auditore, will be included in Soul Calibur V as a special guest character. Unlike in the past where guest characters in the weapon based fighter would be exclusive to certain systems, … END_OF_DOCUMENT_TOKEN_TO_BE_REPLACED

Once again it’s time to huddle around your computer monitors warming glow and bear witness to another top notch live blog for Soul Calibur V!

At Tokyo Game Show this year, the guys behind the Ace Combat games have released a new trailer for Assault Horizon, featuring some multiplayer combat, as well as a few customization options, including the ability to change the color … END_OF_DOCUMENT_TOKEN_TO_BE_REPLACED