Fresh out of Paris Games Week 2015 we bring you the reveal trailer for NieR: Automata, the sequel to the cult favorite currently in development by Platinum Games.

END_OF_DOCUMENT_TOKEN_TO_BE_REPLACED 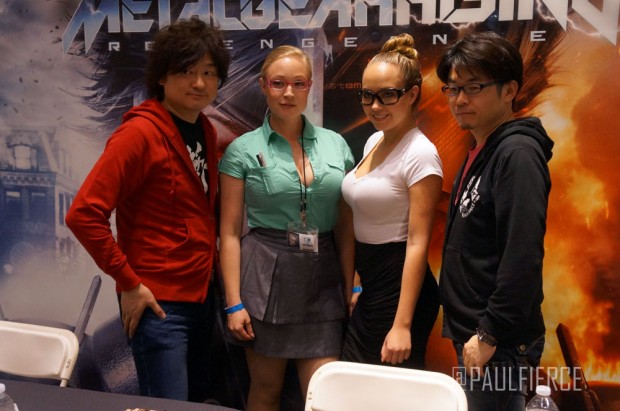 END_OF_DOCUMENT_TOKEN_TO_BE_REPLACED

Here are the tour dates:
END_OF_DOCUMENT_TOKEN_TO_BE_REPLACED

Gamescom in Germany is underway and the typhoon of information is coming in by the late hour. Metal Gear series creator Hideo Kojima confirmed via twitter the release date of the highly anticipated spin off, Metal Gear Rising: Revengeance, as … END_OF_DOCUMENT_TOKEN_TO_BE_REPLACED

Imagine living in a world where cyborgs rule and various military groups have employed these cyborgs as their personal bodyguards. Fortunately for us, that world is contained in Platinum Games’ Metal Gear Rising. I was very skeptical at first, however, it took me less than 5 minutes to be submerged and fully embrace the world of Metal Gear Rising.

The game starts off in a courtyard where a person with a German accent is explaining the controls. Targets raise up off the ground, revealing at first, standalone silhouettes. The second batch of targets are a little more challenging, as they appear to be holding hostages. This is where the fun begins. You hold down the L1 button and the game goes into a slow motion, Max Payne bullet time-style mode. With the right analog stick, you guide the “cut line” (indicated by a orange glow) where to cut, then you simply flick the right analog to that direction, and there you have it!

As the demo progresses, you work your way up the chain, so to speak, by fighting cyborg soldiers one at a time, and sometimes even two at a time. Later on, a Gekko shows up meaning to ruin your day, but you make short work of it by grabbing its tentacle and spinning it around like a stringed Yo-Yo. That’s the way I disposed of it, however there are hundreds of other ways. “Ninja Run” was demonstrated, where you simply hold down a button and you can dash on and around cars, over walls, evade attacks, and “rocket jump”.

END_OF_DOCUMENT_TOKEN_TO_BE_REPLACED

Kojima Productions and Platinum Games collaboration will feature Kenji Saito as the main Director for the upcoming game Metal Gear Rising. Saito was the main programmer on Bayonetta.