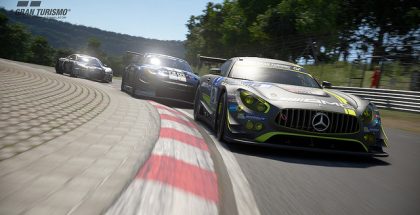 Gran Turismo Sport now has a solid released date on PlayStation 4: October 17! This is big news, which is why we’re getting a trailer for it!

END_OF_DOCUMENT_TOKEN_TO_BE_REPLACED

Gran Turismo 5 fans are treated with a new update for the PS3 exclusive racer. The new update will bring the game to version 2.03 and add a bunch of improvements to the experience. Along with the update, 2 DLC will be available for purchase as of today. Starting off with the all new Car Pack 3, priced at $5.99, which will include six cars: the astonishing Lamborghini Aventador, Jaguar XJR-9 LM, Ashton Martin V12 Vantage, 66′ Volkswagen 1200, Mini Cooper S Countryman, and the Nissan Leaf.

A new test Course pack will also be available for the price of $3.99. The course pack will feature Route X test course, best described by PlayStation blog as a “massive oval with giant banking corners”.

END_OF_DOCUMENT_TOKEN_TO_BE_REPLACED

Red Bull X2010s Gifted to Everyone in GT5

Due to Sebastian Vettel winning the 2011 F1 World Championship, the Red Bull X2010 (arguably the fastest car in the game) has been gifted to all players of GT5. It is only available for a limited time, however, so … END_OF_DOCUMENT_TOKEN_TO_BE_REPLACED

With over 1,000 cars, 26 different locations, and 71 different tracks available in the game, Gran Turismo 5 is easily PlayStationâ€™s most respected and exclusive racing simulator. The game was developed by Polyphony Digital and published by SCE, then released on November 24th, 2010 as the first entry of the Gran Turismo series to be developed for the PS3.

As the release date of the Xbox 360 exclusive racer, Forza Motorsport 4, is closing by, questions were rising of what team Polyphony Digital has been up to? The answer came shortly after â€¦

In a series of twitter messages, Gran Turismo Series creator Kazunori Yamauchi started to reveal more of a Gran Turismo 5 major, FREE update to be released in the second week of October. The major update, entitled â€œSpec 2.0â€, will answer some of the fans requests, including a few technical patches and improve some of the game features.

END_OF_DOCUMENT_TOKEN_TO_BE_REPLACED

Finally,Â the GT5 Damage Patch has arrived, and it’s, surprisingly, not that big either, weighing in at only 149MB in size.

The patch delivers an option for mechanical damage added to the settings for online races, with the following options … END_OF_DOCUMENT_TOKEN_TO_BE_REPLACED

Be sure to click images for high res versions, even this one!

Gran Turismo has always been considered the king of console-based simulation racing. For years, it’s had one of the most realistic physics engines in racing (although not perfect). Gran Turismo 5 was originally rumored back in 2005 at E3, with what was actually Gran Turismo 4 with more cars and rendered on a PC (the video was titled Vision Gran Turismo).

Inevitably, it was believed that GT5 was on its way, but as time passed, and with multiple delays and a general lack of information (until about last year), many had given up on the title, and the series, overall. Even a few weeks before the early November launch, the title had been delayed again, though it has released within the same month anyway.

So now that we have our hands on the long-awaited racer, the question, then, is whether or not the wait was worth the time. Keep in mind, I might come across as a bit harsh, and will have some negative things to say, but I still love the game and my score might seem out of place based on what my words make it out to be, so keep that in mind.