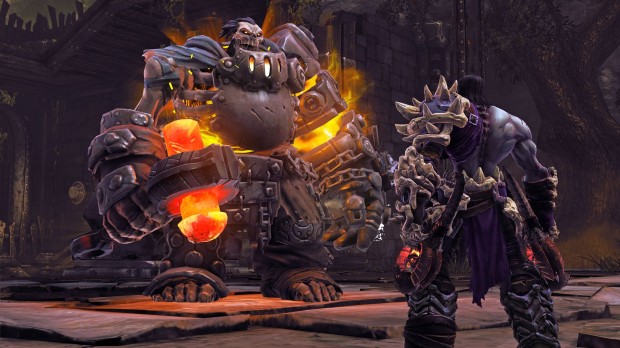 THQ has just announced that the second downloadable content pack for Darksiders II, Abyssal Forge, will be available to download on Oct. 30, for $9.99.

The Abyssal Forge is a living machine designed to harness the unfocussed dark power of the Abyss and create the most powerful legendary weapons. The Maker who built this abomination, known only as the Mad Smith, was shunned by his own people and sealed away in the Shadow Lands with his creation. However, the forge hasnâ€™t remained dormant all those years of captivity; it has constructed a vast army and now threatens all creation.

The vast swamp-like Shadow Lands added by this DLC is a new gameplay zone with an entirely new visual look, including two challenging new dungeons, new enemies to best, secrets to uncover and unique legendary loot to collect. Tailored towards the most competent Darksiders II players, the Abyssal Forge will test your metal against the hardest enemies and puzzles yet.

END_OF_DOCUMENT_TOKEN_TO_BE_REPLACED

For any professional wrestling/WWE fans out there, yesterday, THQ revealed a complete roster list for the upcoming WWE ’13. Included are a number of Attitude-era superstars (think 1990s-early 2000s), as well as attires and looks from those periods of current superstars, including the likes of the Undertaker and Mark Henry. The above is a trailer for the upcoming release, and there will also be DLC in the form of AJ and Damien Sandow. Look for the game to release October 30th in the US and November 1st in the UK and Australia.

END_OF_DOCUMENT_TOKEN_TO_BE_REPLACED

In Darksiders II, you play as the horseman Death, in a story that runs parallel to War’s events in the original Darksiders game. As seen in Darksiders, War has been falsely accused of triggering the Apocalypse, and in Darksiders 2, Death defies orders and sets out on a personal mission to prove his brotherâ€™s innocence.

Darksiders 2 promised to feature a dramatically larger world, full weapon and armor upgrade systems, as well as bigger and more challenging dungeons and vast array of new enemies and bosses, basically improving on every aspect of the original game. The question is does it?

END_OF_DOCUMENT_TOKEN_TO_BE_REPLACED

Darksiders 2 “Get to Know Death” Trailer

Darksiders II hits stores nationwide in just one week, and to celebrate THQ has released the final Darksiders II gameplay trailer featuring the perspective of Death himself.

I have been playing this and will have a review up soon, … END_OF_DOCUMENT_TOKEN_TO_BE_REPLACED

Darksiders II is now scheduled to release globally in August 2012, rather than June as previously announced.

The official announcement added that, “this is great news for the team at Vigil, because it allows additional time for polish … END_OF_DOCUMENT_TOKEN_TO_BE_REPLACED

Saints Row has always been one of those franchises where each successive title is more over-the-top than the next, and Saints Row: The Third is no different. In fact, this title takes the ridiculousness to a much higher level than the jump from 1 to 2. It may have been a few months since the game originally released in November, but a hundredth opinion doesn’t hurt, right? With the amount of hype and attention THQ built up for this game, does the title fall short, or does it meet or exceed the expectations?

Back in the prime of the Grand Theft Auto series, open world, sandbox titles (at least as far as action/crime-themed ones go) were referred to as â€œGTA Clones.â€ Although this is more of a sensationalist monicker, I’d say this is also the title that would best fit it. It’s not inherently bad, though. Saints Row has a habit of taking things that worked right in GTA games, gave it their own personal touch, and then took them to a higher level. Look at the vehicle customization, for instance. Not a whole lot has changed as far as the Saints Row universe is concerned, but what did GTA have after San Andreas? Nothing.

Anyway, I won’t delve deeper into the comparisons between the two, because that’s not what this is about. Here’s where the review truly begins.

END_OF_DOCUMENT_TOKEN_TO_BE_REPLACED

THQ announced a $99.99 Collector’s Edition of their upcoming action adventure sequel: Darksiders II. In this second installment, you will be taking control of Death, one of the four horsemen of the Apocalypse.

Here is what you get with … END_OF_DOCUMENT_TOKEN_TO_BE_REPLACED

For those who are big into wrestling games, namely the arcade variety, THQ has recently released WWE WrestleFest on iPad/iPhone. It is based on the old 1991 arcade game ‘WWF WreslteFest’ but updated with the WWE Superstars of today (as well as legends; there are about 30 superstars in all) and crisper, cleaner graphics.

As for the rest of us, THQ will be releasing the game later on PSN (as well as XBLA and Android). As to when exactly, there is no set date. We’ll have more information as soon as it becomes available (including whether or not it will only be on PS3, or Vita as well). Check below the jump for a trailer of the iPad/iPhone version to get an idea of what the game entails.