This new DLC looks very, very cool. I will definitely be playing this one when it’s released!

Hit the jump for all the details!!
END_OF_DOCUMENT_TOKEN_TO_BE_REPLACED

How many stars can you name??

END_OF_DOCUMENT_TOKEN_TO_BE_REPLACED

I have to admit, I’m really surprised at the changes they are making to the next Call of Duty title. For example, there’s the new guns of the future and you have an interesting mix of Crysis meets COD. The … END_OF_DOCUMENT_TOKEN_TO_BE_REPLACED

Here is the first trailer for Call of Duty: Black Ops 2 multiplayer, which will take place in the year 2025.

END_OF_DOCUMENT_TOKEN_TO_BE_REPLACED 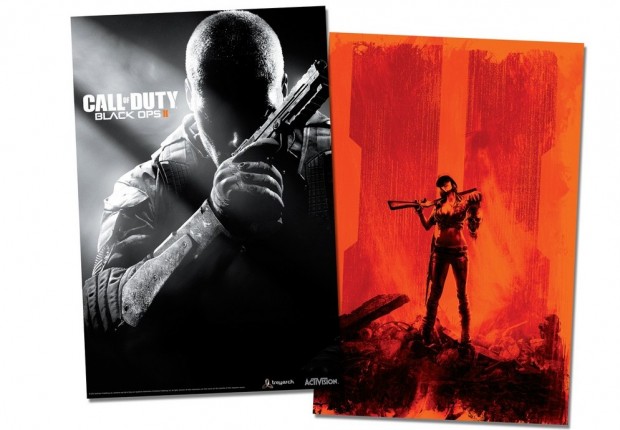 Gamestop has announced that there will be four waves of pre-order incentives for Call of Duty: Black Ops 2, starting with this double sided poster pictured above. The orange side is a teaser for the zombie mode, which will allow up to 8 players this time around. There is also a MW3 Prestige Token available for pre-ordering.

Hit the jump for all the details.

END_OF_DOCUMENT_TOKEN_TO_BE_REPLACED

Just when the industry thought they figured out the Call of Duty formula, Treyarch switches it up and gives us a futuristic look at what the world may become. With that the world premiere trailer is downright straightforward and it looks like we wont be stuck in the jungles of Vietnam in the next installment. Enough talk, just watch.

I dropped by my local EB Games after games night at a friend’s place on Monday night, but the lineup was about 100 people, and it just wasn’t moving. So I went home and had a good night’s sleep and picked up Black Ops the next morning. I played Combat Training for the morning, and online multiplayer in the afternoon and evening, and also quickly checked out the local split screen. Here are my thoughts on the game so far. I have reached level 16 and my K/D ratio is about 1.2. I’ll post a part 2 once I’ve had a chance to play multiplayer a lot longer.

I’m not going to go over all the game mechanics. You can read that elsewhere. Instead I’ll focus more on my thoughts of the game.

I like ’em! I really do. There’s not quite enough variety between the maps, and some look very similar to others. But other than that, there’s nothing I can complain about. WoodysGamertag complained that they are all too brown and gray, but I didn’t think that was a problem at all. It’s obvious that these maps were not made by Infinity Ward. Often when I’m traversing a map I’d think “that wouldn’t be in MW2″. (Like rooms with only one entrance.) On the whole, the Treyarch maps feels a lot more like real places instead of set pieces. There are interesting nooks and crannies to explore, and the maps are big enough that it will take a while to learn them all. Well, except for Nuketown, which is Black Ops’ equivalent to Rust. I’m quite pleased with the maps, and I don’t cringe at any map that comes up in the rotation. At least not yet.

The map voting is kinda cool too. You can vote on what to play next. There are three options. You can vote on the next map the game chooses for you, or the map you just played, or some other random map. Even though I don’t understand why people would want to play a map they’ve just played, we still have more options than MW2 gave us.