Younger Gamers To Get KidzPLAY Range At E3

We can’t deny that E3 this year is and has been all about the next-gen consoles. However, we shouldn’t overlook the fact that the PS3 is still going strong and will be getting more love for a few years to come.

Accessories 4 Technology, whom own the well-known UK based PS3 accessories brand 4Gamers; and of course are an Official PlayStation accessories developer, will be making a huge announcement at E3. One point to note though is that the announcment is geared towards a more younger generation of gamer. As a parent, I think that this announcement is massive! My daughter is 6 (going on 7), and she loves gaming. Throw on a copy of LittleBigPlanet Karting, Hamsterball, Wonderbook, or PS Move’s Start The Party on and she’ll be hooked on it for hours – of course, as a parent I have to limit the amount of time she spends on our beloved console for many reasons.

So, back to A4T. We all love to play games, especially the younger generation – and this is where Accessories 4 Technology comes in. They have developed some awesome PS3 accessories which are aimed at young gamers. This new range is going to be called KidzPLAY.

Now our sources state that they will be announcing some really awesome accessories for this range – but we have been told to keep our lips sealed until they have been announced. However, WE CAN share with you the image below and the following: 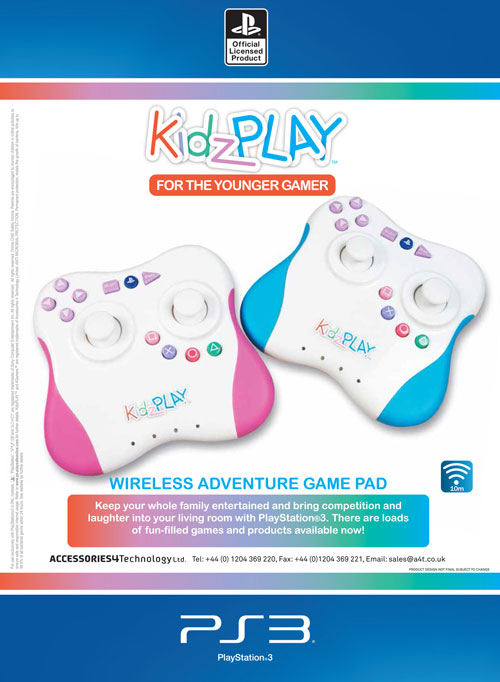 ACCESSORIES 4 TECHNOLOGY Ltd is using E3 to unveil details of the upcoming launch of their new accessory and peripheral brand specifically designed for the younger gamer. â€œKIDZPLAYâ€ will be introduced into the market towards the end of Q3, and looks set to sit at retail alongside some of the biggest kids 1st and 3rd party titles, including Skylanders and Disneyâ€™s Infinity, during this upcoming peak season.

The new PlayStation Officially Licensed KidzPLAY brand will initially be focused exclusively on the PS3â„¢ system, and will be available throughout the SCEE region in Europe, Middle East , Africa and Australasia from its launch later this summer.

Bill Stirling, Company Director and Co Founder of A4T says â€œWe feel that the time is now right to bring our new brand to market. With the PS3â„¢ system becoming more affordable and moving upstairs as the system of choice into kids bedrooms and playrooms, we will offer families a range of products which have been specifically designed to appeal to the younger gamer and their parents alike. The products will be colourful and attractive, with uncomplicated feature sets and affordability at retail.â€

Each product will have built in key features specific to the needs of the younger gamer, and all handheld products in the range will contain an Anti Microbial additive which provides continuous built-in protection against 99.9% of bacteria within 24 hours, and lasts for the expected lifetime of the product.

The range will launch in conjunction with a full marketing support package, including point of sale material and tailor made FSDU units, which can be made available to retail fully stocked and ready to be positioned next to the key kids titles in stores leading up to and through peak season. Full details and specification of the KidzPLAY range will be made available over the coming weeks.

So, what do you think? A controller / pad (call it what you want) for younger gamers which has “continuous built-in protection against 99.9% bacteria”? And “lasts for the expected lifetime of the product”?!? Certainly sounds like an amazing product!

Do you think this new accessory will appeal to the younger gaming generation? We can’t wait to see what else A4T has packed for this new range at E3!