Magic: The Gathering: Duels of the Planeswalkers 2009 should be understood with the benefit of hindsight and experience as a sort of beta test for the latest version of the game, Duels 2012. The 2012 version of the game is essentially identical in its game play mechanics and its visual aesthetics, but 2012 does everything better, featuring a more modern look, more streamlined play, an additional game mode, greater control over deck editing, and â€“ most importantly â€“ better balanced decks. In short, if youâ€™re looking to play Magic on your PS3, buy 2012 and skip this older version.

END_OF_DOCUMENT_TOKEN_TO_BE_REPLACED

Allow me to preface this review by getting a few things out in the open: I am not, nor ever have been, a Magic: The Gathering player. Iâ€™ve only recently dabbled in the two digital flavors of the card game available on the PS3. So what youâ€™ll find here is entirely a neophyteâ€™s perspective, and Iâ€™ll address my review to noobs like me (as, presumably, the Magic aficionadi already know all about the game anyway). Secondly, I quite enjoy the game that Iâ€™m reviewing, but itâ€™s difficult to recommend the game to others, especially those who are unfamiliar with the game. If you are the sort of person who likes strategic trick-based card games, like Tarot (the oldest European card game) and its successors, Whist and Bridge, then Magic may well be right up your alley. Or, in a perhaps more familiar digital gaming idiom, if you enjoy turn-based strategy games, like 3DOâ€™s inimitable Heroes of Might and Magic series, then sign up. If none of the above conditions pertain to you, or if you are allergic to Dungeons and Dragonsâ€“style fantasy worlds, then stop reading now and pass on this title.

END_OF_DOCUMENT_TOKEN_TO_BE_REPLACED

The seventeen minute demo of Bioshock Infinite that debuted behind closed doors at E3 is at last available for public consumption. The game looks absolutely amazing, featuring game play that relies not only on the ingenious guns + magic powers formula from the previous Bioshock titles, but also vertiginous navigation around the floating city of Columbia using roller coaster-like rails.

Another exciting new feature is the sidekick’s ability to interact with “tears” in space-time, such that she can create objects seemingly from thin air and manipulate the world in other ways, transforming the cityscape into a city of another era. At any rate, the tech is remarkable, and it appears that the demo is being played on an XBox 360. Hence the game should look beautiful on our beloved console as well. (I appreciate that the demo doesn’t use the PC version, which will, presumably, look much nicer than the versions on current-gen consoles.)

Check out the footage after the jump.

END_OF_DOCUMENT_TOKEN_TO_BE_REPLACED

Bioware released a first patch for Dragon Age 2 on April 19, 2011. In our review of the title, we mentioned the host of (more or less minor) glitches that we’ve experienced with the title. Unfortunately, it looks as if these problems were not addressed in the patch. The bug fixes generally address oddities with companions’ armor and skills. Some minor quest problems have been fixed as well. Finally, Bioware remarks somewhat enigmatically that “[v]arious technical changes should improve performance and limit crashes.” Best update: “Varric is no longer confused about which character Hawke has been romancing.”

Full change log (beware of minor spoilers) after the break.

END_OF_DOCUMENT_TOKEN_TO_BE_REPLACED

Dragon Age II (released March 8, 2011) is Biowareâ€™s sequel to their late 2009 new RPG IP, Dragon Age: Origins. The new title boasts a dramatically improved graphics engine and combat that is both more fluid and more frenetic than the originalâ€™s. However, the new game also has some limitations. Hereâ€™s a telling fact, for instance: In DA:O, your epithet by the end of the game is â€œHero of Ferelden,â€ while your moniker in DA2 is â€œChampion of Kirkwall.â€ Why does that matter? Well, Ferelden is a country, and Kirkwall is a city. And as that distinction I hope implies, DA2 is a more localized, shorter, and rather meeker affair than its predecessor. Still, itâ€™s a great deal of fun, and if you enjoyed the lore of the first game, you should certainly pick up the latest title. If DA2 had been the first game in the series, it probably would have merited an A in my book. Ultimately, though, the successor falls short of the high standard set by its progenitor, and in the following review, Iâ€™ll explain why I think DA2 warrants a B-.

END_OF_DOCUMENT_TOKEN_TO_BE_REPLACED

Tim Schaferâ€™s innovative studio Double Fine, which brought us titles like Psychonauts, Brutal Legend, and Costume Quest (which we reviewed), released the Russian doll-based action/puzzler Stacking to PSN and XBLA on February 8, 2011. In the charming world of the game, you play a Russian nesting doll who must rescue his family from an evil industrial magnate by completing various puzzles in locales like a train terminus, a luxury steamer, and swanky zeppelin. The a-historical setting of the game is an England that canâ€™t quite decide whether itâ€™s late Victorian or Edwardian (think Oliver Twist on the Orient Express), but itâ€™s a compellingly-realized fantasy world populated by dolls of various sizes, with a great deal of personality in their deft detail.

END_OF_DOCUMENT_TOKEN_TO_BE_REPLACED 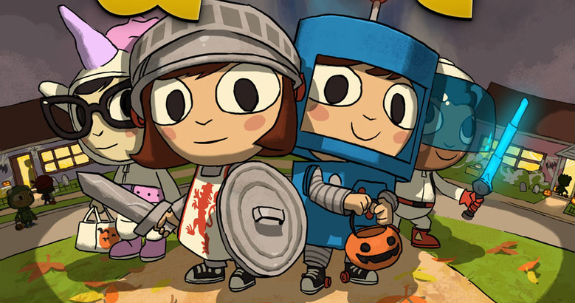 Tim Schaferâ€™s studio Double Fine, which created the innovative adventure/platformer â€œPsychonautsâ€ and more recently the quirky Russian doll game â€œStacking,â€ released the seasonally-themed light RPG adventure â€œCostume Questâ€ to PSN and XBLA on October 19, 2010. The game is a delightful bit of cotton candy fluff that features tongue-in-cheek but innocent humor, a solid if simplistic turn-based battle mechanic, and a healthy respect for the sense of empowerment that role-playing can bring to a kid or even to us, whether in a Halloween costume or through digital avatar. The game is suitable for everyone from a child who has never played an RPG before to an experienced and obsessional gamer (you know the type: the one who has to collect every single one of the five hundred useless doodads scattered throughout a game world).