Beyond PlayStationGame ReviewsThe Ninja Saviors: Return of the Warriors
No Comments 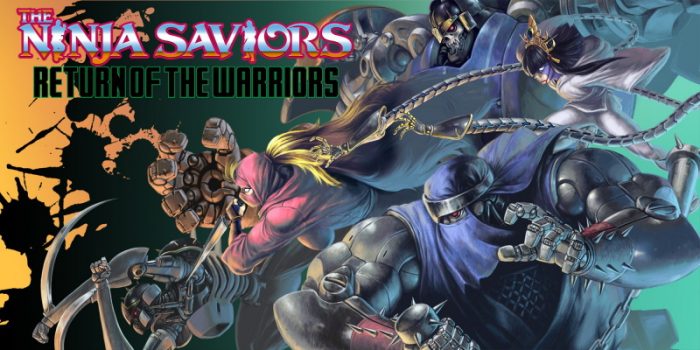 The Ninja Saviors: Return of the Warriors is a new take on an old-school classic beat ’em up, revamped for both a new generation and those that played the original at the arcades or on their Super Nintendo Entertainment System. All three characters from the original release are back for one more round in The Ninja Saviors: Return of the Warriors. There’s female android Kunoichi, an agile and versatile fighter who uses a deadly katana to slice and dice opponents, making her perfect for those looking for a balanced character. You also have Ninja, a robust android of a larger scale who packs a mighty punch, compensating for his slower movement with powerful attacks and throws. The last member of the trio is Kamaitachi, a nimble, fast, but weaker android. 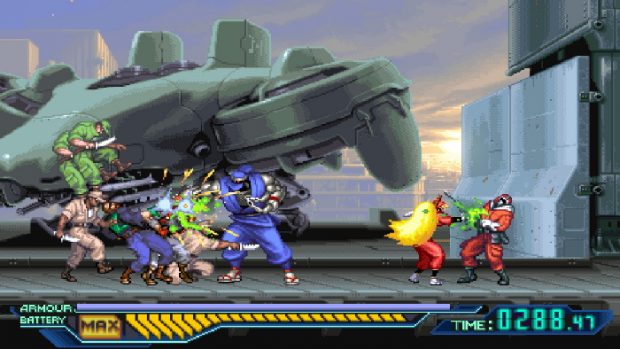 This is a 2D beat ’em up in every sense of the word, meaning that it has you controlling one of the characters on a 2D plane, moving only left and right in each location, instead of having a playing experience like, say, Streets of Rage or Final Fight. Because of this, it offers a more streamlined beat ’em up experience, while still packing each segment with a ton of enemies to defeat. You’ll need to make the most of your attacks, skills, and special attack to be able to clear out enemies before they corner you, or else you’ll end up dying rather quickly from the constant barrage of attacks. 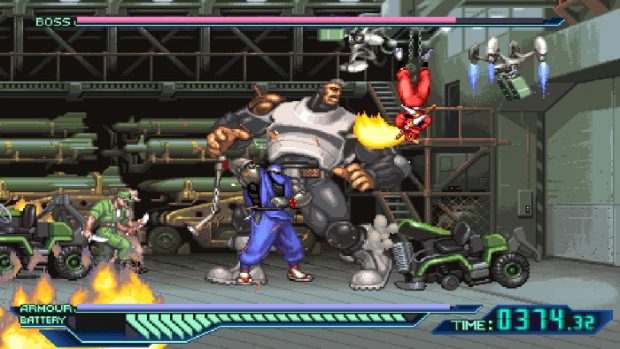 You’ll take on this 2D beat ’em up by moving your character around with the left analog stick or the D-Pad. You can crouch by pressing down, and can crouch walk by then pressing left or right. Your jumps are mapped to the B button, and you’ll attack with the Y button. To guard, press, and hold the Y button. If you want to unleash your special once you’ve charged up the energy bar, then you can do so by pressing the A button. Each of the characters features some different special attacks, which sure, you should probably save for upcoming boss fight to be used discretionally as needed. 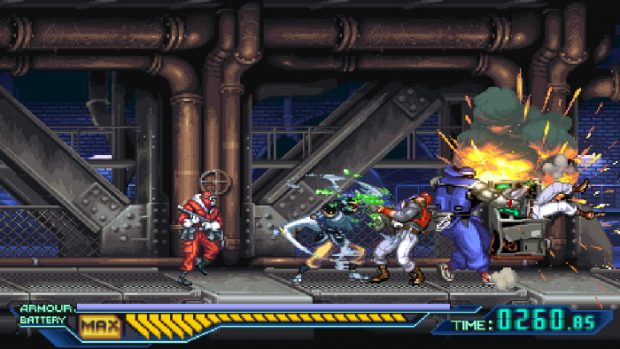 As you battle against the many opponents you will face, you should always keep an eye on your armor bar at the bottom of the screen. This represents your character’s overall health, and if it reaches zero, then you’re done, and it’s game over. There are items you can collect to recover some of your battery bar, but they’re not as plentiful as you’ll need them to be if you’re not careful with your actions. Enemies can strike you if they gang upon you, and you can certainly be left missing that bit of extra battery power later in the level 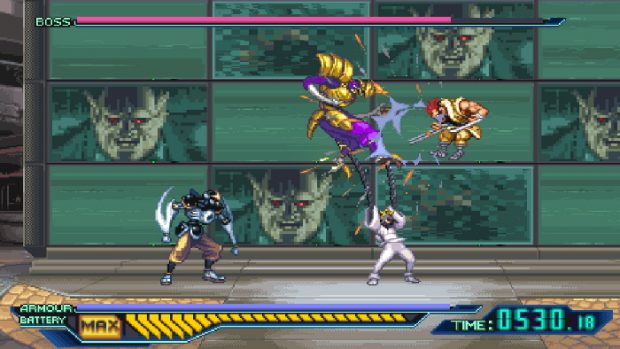 The team of original developers for The Ninja Warriors, known as TENGO PROJECT, is the one behind this new and improved remastered, which takes the original game and revamps every single aspect of it to give us the expanded, improved, and definitive version of the game. The team previously worked on the great Wild Guns Reloaded, which followed a similar blueprint by enhancing and expanding on a classic from the Super Nintendo era, to give us the definitive version of that game. 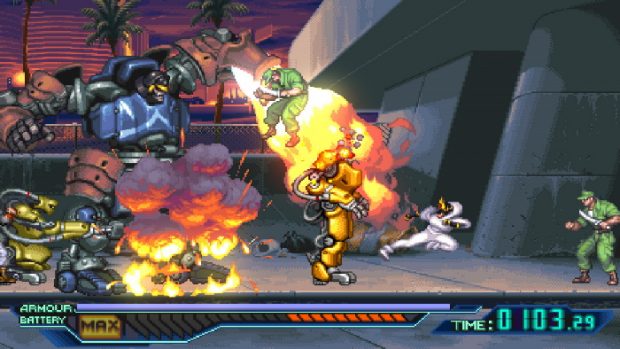 As for The Ninja Saviors: Return of the Warriors, TENGO PROJECT has re-drawn the graphics, added new animations, added support for a widescreen 16:9 presentation, boosted the quality of the audio, included a local co-op mode, an online ranking and, best of all, two new characters have now joined the fight: petite female ninja Yaksha and her extending arms, and massive mech shinobi Raiden, who takes up 1/3 of the screen. This brings the number of playable characters up to a total of five, with each one feeling different from the rest. The team also added the option to listen to the game’s soundtrack either with the original arcade release’s version or the Super Nintendo version (at least once you’ve completed the game once with either Yaksha or Raiden). 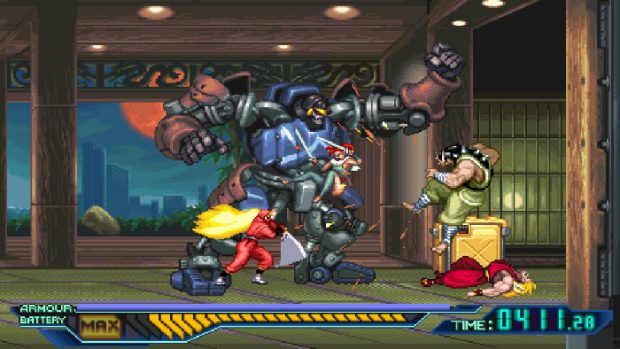 The Ninja Saviors: Warriors Return is a great new take on a 2D beat ’em up classic that revamps the whole thing, new characters included, to give us the definitive version of the Ninja Warriors adventure, ready for both those new to the game and old-school fans to dive in for a game that feels nostalgic and modern. It’s available on Nintendo Switch for $19.99, and it’s certainly worth the price of admission.

Disclaimer
This The Ninja Saviors: Return of the Warriors review is based on a Nintendo Switch copy provided by ININ Games.

A revamped and improved take on a beat 'em up classic