Monster Hunter Portable 3rd is one of the better looking PSP titles out there. The amount of detail from the village to the maps is really a step in the right direction. The steam from the kettles to the flags blowing in the wind really add to the cheery atmosphere the village aims for. The color palette in the game is bright and cheerful and is prominent throughout the few hundred hours of game play. Monsters are extremely detailed and show real time damage as the battle progresses. The game looks so good that revisiting previous titles will cause you to cringe. 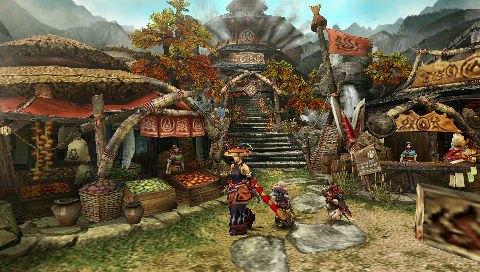 The areas take on a completely new look from night and day with small details like stars and mist only adding to the feel of the game. The armors and weapons have hundreds of small details showing other players immediately that you have crafted an armor piece from said monster. 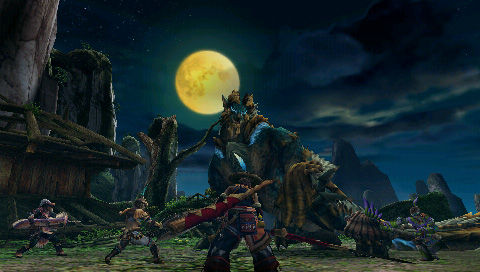 They still haven’t managed to clean up the HUD, which ,in my opinion, has way too much going on. I often find myself not grabbing the map so I don’t have to stare at it taking up the right side of the screen. Take into account other players’ health and names are displayed on the left below the stamina and health bar and you have a lot going on. 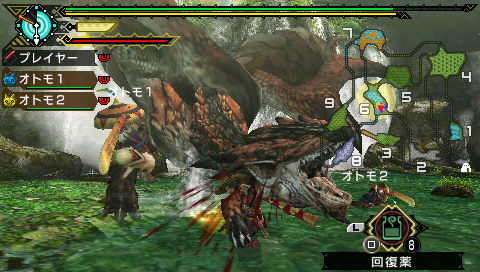 Lets get one thing out of the way here, Monster Hunter has never ever been about a story. The typical scenario is you’re a Hunter and your job is to hunt. You move up the ranks fighting harder and harder monsters while crafting better and better gear, which sometimes requires you to kill a certain set of monsters numerous times to do so. They typically end with a scenario of a great monster invading and you must repel or kill it to save the village. That is the same scenario here. So if you want story you wont find it in this title, or any other Monster Hunter title for that matter.

I found 3rd to be much too easy for previous fans of the series. What should have taken me a solid 100hrs in single player I blew out in 32hrs. The team behind 3rd is obviously trying to make this entry more appealing to first time players, and in that sense they have succeeded. Only until the later Monsters will you begin to let out a couple of curse words at your PSP screen. Nothing that will make you decide to quit, as the 3 chances you get is always enough.

The camera is debatable. You need to constantly adjust the camera while fighting to keep your target in sight. This is done with the left D-Pad and L trigger. The L trigger centers the camera directly behind you and the D-Pad controls like a right analogue. I enjoy the constant battle with the camera as I feel it adds to the intensity of a big battle. We’re going to knock some points off here as I am probably a small percentage of people with that view. 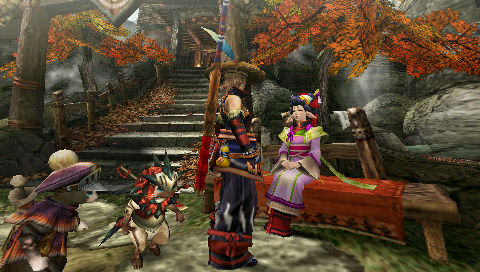 Monster Hunter 3rd brings over the ability to hire a felyne, with a few minor changes. You can now hire 2 and equip them with custom armor and weapons from scraps left over by your gear creation. Having 2 helpers is what makes the game so much easier in my opinion. The Monsters you hunt wont be focused on you, constantly allowing more breathing room to heal and craft traps and bombs while they pummel your hired mates. Felynes will also be able to be sent out on hunts and mining quests, allowing you to gather more materials while you quest on your own. This is a welcome addition, as it cuts down on the time required gathering rare materials. 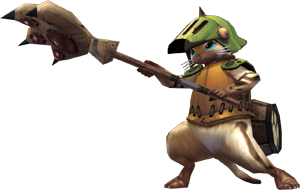 The guild hall returns for multilayer and recycles many of the single player quests but with harder monsters for the first few ranks. The higher ranked quests become extremely hard, throwing 2 monsters at you simultaneously. The higher rank you are, the harder the objective becomes and better gear becomes available to craft. The G rank level quests will have you fighting subspecies of previous monsters that are 10x harder. So if you thought the Barroth was hard the first time, wait until you meet his little brother.

You can import Monster Hunter 3rd from here if interested, or wait for the import version of the PS3 to be released from the same site. A North American release has not been announced for the PSP or the PS3 at the time of this review. Look for an update to the review on the differences found in the PS3 version when released.

This review is based on a retail copy of the PS3 version of Monster Hunter Portable 3rd provided by Capcom.

First Ever Konami E3 Pre-Party Promises to be “Memorable”