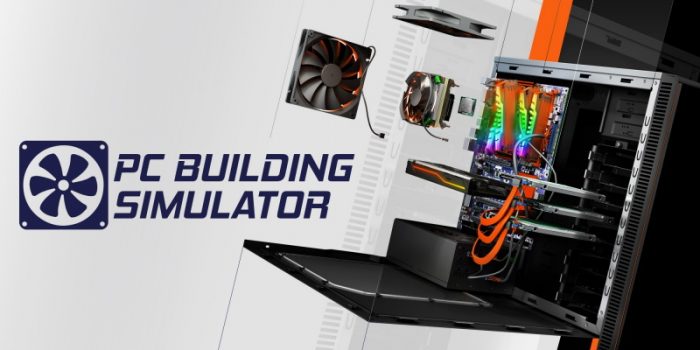 As the name suggests, in PC Building Simulator, you will take on the task of, well, building a PC! Right from the start, what you’ll notice after you load the game is that there are a ton of logos in the first splash screen showcasing all the brands that are participating in the game. That’s right: you’ll be building many PCs by using digital representations of real parts from real manufacturers, which is certainly not what I was expecting when I took on reviewing this game! You’ll find more than 1,000 real-world parts in this one, from brands such as AMD, ASUS, Intel, NVIDIA, Razer, Zotac, Gigabyte, and more, which you’ll put to good use. 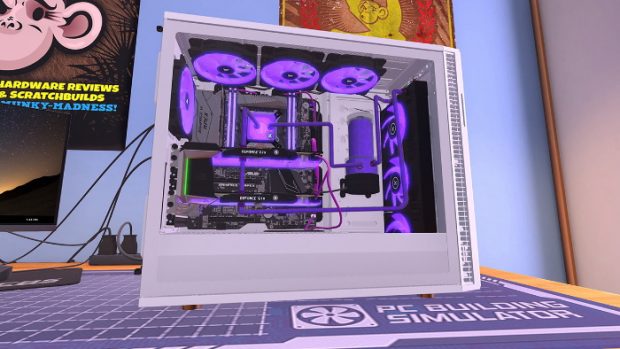 The game can be controlled either with the left analog stick to move a cursor around the PC while rotating the view with the right analog stick, and zooming in and out with the ZL and ZR buttons, or by using the touchscreen on the Nintendo Switch when playing in Portable or Tabletop mode. It’s all very intuitive, and you will get the hang of things in a few minutes at most. Both control options work great, and while playing in Portable or Tabletop mode, you’ll be able to get the best of both worlds by changing between one or the other as needed.

Before you dive into the game proper, you should take a look at the tutorial that will show you the basics of what you can do in PC Building Simulator. Step one will be to open the computer case by removing the side panels so that you can review the available space to install the components. The next step will be to install a power supply unit (PSU) to power-up all the components you’re going to place. This is when you’ll get to see that, yes, you actually have to remove some screws here and there to get access to the areas you need to open up for you to work on. 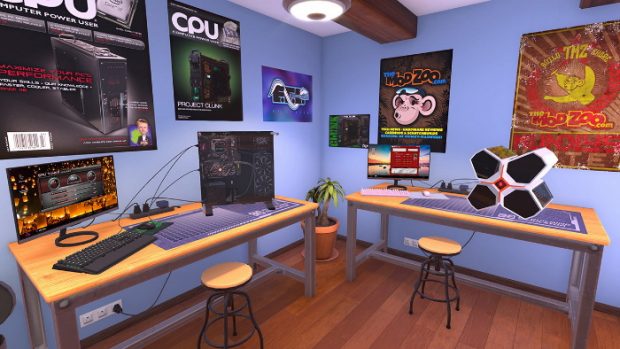 The PSU will be available in your inventory, so using the on-screen cursor you can click on the box icon in the lower-left corner. Each part you collect from your inventory can be clicked on to get a closer view so that you can understand how each one is going to be used in your build. After this, it will be time to install a motherboard, which will act as the heart of the PC. The motherboard will need to be powered, so you’ll be connecting that with the required wires so that it can run smoothly, as it contains extra ports such as RAM slots, slots for hard disk drives (HDD), the socket for the CPU, and more.

A PC won’t be of much use without a central processing unit (CPU), so grab one from your inventory to slot it into the corresponding socket in the motherboards you’ve just installed and wired. The CPU is going to be doing a lot of hard work on your PC, so you’ll need to make sure it doesn’t overheat or else it will not work properly. You’ll have to apply some thermal paste to improve the conductivity between the CPU and the cooler you’ll install, which can be either an air cooler or a water cooler. Air coolers are the most common ones as they will have a cooler plate, heatsink fins, and a fan that will spin right round. 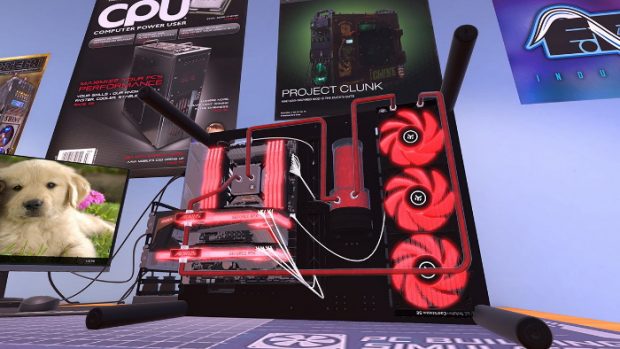 To add some extra spice into your build, you’ll need to install a graphics card (GPU). A GPU is going to be a mini-computer of its own with extra processors and memory to be able to boost the performance of video games. Depending on the rig you have to build, and how a GPU is configured, you could connect multiple cards that will be linked together to boost a system’s performance considerably. A good GPU and a solid CPU is all nice and well, but they won’t make a difference if the PC doesn’t have enough random access memory (RAM). RAM is rather fast memory that the CPU uses to do what the CPU does.

Before you can declare victory, you’ll need to install a HDD so that you can store the operating system (OS) data, as well as the data and information for all the programs on the PC, as well as stuff such as a user’s music, photographs, videos, documents, and more. An HDD is basically a small, durable case with a spinning disc inside of it where data is going to be written into so that it can later be read and relayed. An HDD is going to be way slower than RAM, but since it is long-term storage, it’s going to provide a whole lot more space from which data is going to be grabbed as needed. 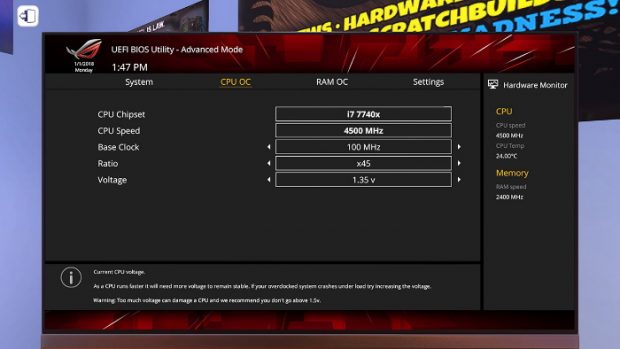 Remember how I mentioned that because the CPU can get very hot as it works, adding thermal paste and a cooler unit would be a must? Well, the rest of the components on a PC are also going to turn very hot as they do their thing, so you’re going to have to also install a fan for your PC case so that it can use its motor to spin around at a steady speed to draw heat out from inside of the PC case. Depending on how much heat is generated, you might have to install more than one fan.

Once your PC has been completed, you’ll need to plug in the cable that will be connected to an electrical socket to provide power to the whole thing, as well as connect the wires for the keyboard, mouse, and monitor, so that you can test if everything works as expected. Building a PC is easier nowadays since mouses and keyboards are connected by way of USB and not by using special connector types for each one as was the case “back in the day,” and the same applies to monitors since you’re going to be hooking up HD monitors to your PC by way of an HDMI cable.

And now, let’s talk about Career mode. In this mode, you will take care of your very own PC building and repair workshop, using your skills to complete the many tasks and requests presented to you by customers. You’ll be checking your email to see what type of service you need to provide, but the first email you’ll actually have is from Uncle Tim, the workshop’s previous owner. It is thanks to his email that you will near that the company has no money, that the rent and energy bills must be covered every month, that there’s already one pending job for you to complete on your first day as the new owner, and that a PC can get hot pretty fast, which is why thermal paste is very important. 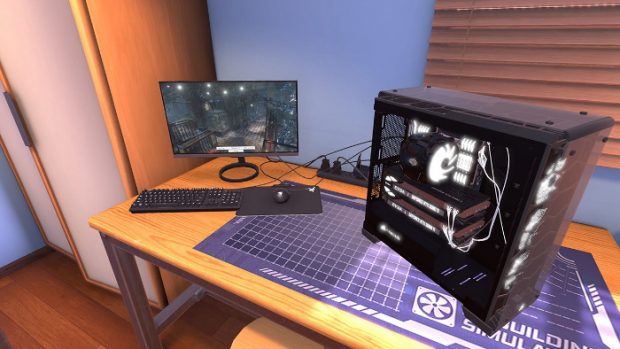 Along with building PCs, you’ll also need to provide repair services for your clients, with your first job asking you to remove some viruses from someone’s PC since they clicked on something they shouldn’t have, and now everything is running very slowly. Once you’ve moved the PC to your workbench and connected all the cables, you’ll use a USB flash drive to install a virus scanner. After a few seconds, the virus scanner will be installed, and once you restart the computer you’ll be able to run the program to scan all files to find the viruses – and there are going to be a ton of infected files!

Every job you complete will allow you to be paid some hard-earned cash that you can use to pay for bills, as well as to purchase parts for your workshop. Once you’ve completed all projects, you’ll have to walk towards the door and click on it to end your day so that you can get some rest and come back the next day with some renewed strength. Do take note that for some projects you will need to consider any parts you have to order to complete them, and they’re not going to magically show up as soon as you order them, so always be sure to check if you need to order some parts before calling it a day! Sure, you can pay for same-day shipping, but it’s going to cost you an arm and a leg, so you shouldn’t be using that option too much. 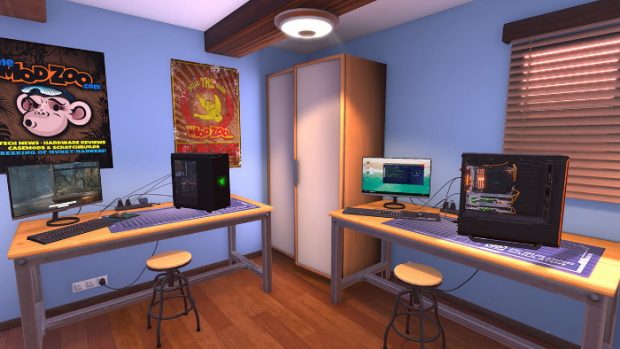 As you complete projects you will also gain experience, leveling up once the green bar at the upper right corner of the screen is full. Leveling up will open access for you to do new things, such as changing your peripherals, building a PC storage cupboard, or building a second workbench. Some projects will also require that you first have reached a specific level threshold before you can take on it, so it pays to work hard on all projects so that you can do a good job and be rewarded with some much-needed experience points. Other projects will require a lot of parts for you to purchase, and since you start with nothing, you won’t be able to take on bigger projects until you have the required funds.

Disclaimer
This PC Building Simulator review is based on a Nintendo Switch copy provided by The Irregular Corporation.

Very addictive game that offers what it's name suggests